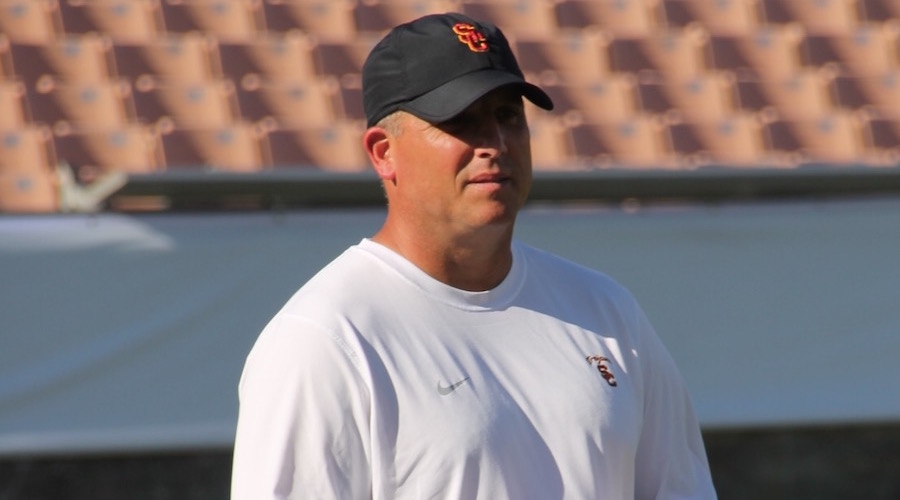 With the USC offense sputtering throughout the contest, and the defense unable to shut down a methodical Stanford offensive attack led by Christian McCaffrey, the Trojans fell to the Cardinal on Saturday night by a final score of 27-10.

Things looked particularly bleak for the Trojans early on, with both the offense and defense making critical mental mistakes. USC racked up seven penalties for 51 yards in the first half alone, five of which were false start infractions committed by the offensive line – a factor that played a major role in the inability of the Trojans to move the ball down the field.

The Stanford offense, meanwhile, took advantage of a USC defensive error to put the first points of the game on the scoreboard, as Cardinal quarterback Ryan Burns hit a wide-open McCaffrey for a 56-yard touchdown following a breakdown in coverage in the USC secondary.

USC would answer with a 47-yard field goal by Matt Boermeester, but Stanford added a field goal of its own, as well as a one-yard TD plunge by McCaffrey to give the Cardinal a 17-3 lead heading into halftime.

In contrast to the start of the game, USC came out and actually showed some promise to begin the third quarter. Max Browne directed a very solid nine-play, 75-yard touchdown drive that was capped by a one-yard touchdown run by Ronald Jones II, and all of a sudden Stanford’s lead was cut to seven.

That was as close as USC ever got, however, as the Cardinal would add another field goal in the same quarter, before Michael Rector took a pitch on an end-around and broke loose for a 56-yard touchdown.

Browne finished the game 18-of-28 passing for 191 yards. Darnold also saw some time at quarterback late for the Trojans. He completed 5-of-7 passes for 45 yards with one interception. Justin Davis and Jones led the team in rushing with 63 yards a piece.

Steven Mitchell Jr. led USC’s receivers with five catches for 52 yards. Star wideout JuJu Smith-Schuster, meanwhile, had just three catches for 34 yards, and he was quiet throughout a majority of the game.

For Stanford, Burns completed 9-of-15 passes for 109 yards and one touchdown with one interception – made by Trojans cornerback Adoree’ Jackson.

McCaffrey finished with 260 all-purpose yards, 165 of which came on the ground.

The loss drops the Trojans to 1-2 on the season, with a game against Utah coming up next on Friday night in Salt Lake City.