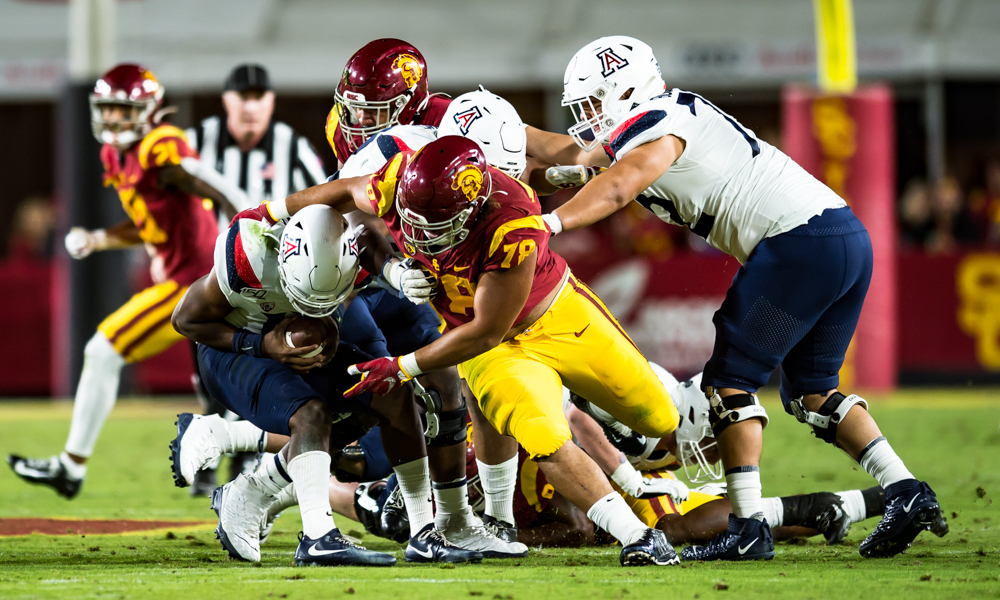 USC’s new defensive coaching staff wrote some pretty big checks yesterday. Now, it’s up to the players to pay them off.

After defensive coordinator Todd Orlando, safeties coach Craig Naivar, cornerbacks coach Donte Williams and defensive line coach Vic So’oto took the podium on Tuesday to deliver opening remarks and answer questions from the assembled media, it would have been difficult to leave the event with a more positive outlook for that side of the ball.

At times, it was difficult to tell if these coaches would be getting their players ready for just football games this fall, or something somehow even more physically demanding.

“If you want to be a good fighter, you gotta get in fights,” Orlando said. “So you’ve got to practice that way. We’re going to practice physical. I can tell you that.”

So’oto said the words “violent” or “violence” 10 times during his time up front.

“Anytime I put my hands on someone, he goes backward,” So’oto said of the violent mindset he wants to see from his group, and there was maybe a noticeable flinch from the front of the media room, as So’oto delivered his lines with the confidence and determination of someone who just might offer a quick demonstration.

“Stick your foot in the ground and go run through somebody’s face,” he said. And who needs anything more than that?

Williams put his players on notice a little bit with what he expects from them.

“Do you love football?,” Williams said of what he looks for in a cornerback. “Football is a hard sport. You could be 5-4 and I could send you out there right now to take on a guy blocking you who is 6-7, 330 pounds. And to do that, you can’t be timid about that. So you have to be able to love this a little bit, because it’s going to be a little bit of pain in this.”

Now, it’s up to the USC players to deliver, because the quotes from these coaches on Tuesday morning won’t sound as sweet being relived at the end of a five-loss season.

But there’s no question the talent on this roster is capable of rising up and performing to the borderline-gruesome standard this staff has set for it.

Up front, USC returns starters everywhere, including Jay Tufele, who decided to return to school rather than declare for the NFL Draft, as well as Marlon Tuipulotu, Brandon Pili and Caleb Tremblay, whom So’oto has been clearly impressed by early on.

The linebacker position is loaded, as there is the potential return of Solomon Tuliaupupu and Jordan Iosefa from injury, as well as the continued maturation of Palaie Gaoteote, Kana’i Mauga, Ralen Goforth, Eli’jah Winston, Hunter Echols, Abdul-Malik McClain and several others.

And the secondary boasts a sextet of potential cornerback starters in Isaac Taylor-Stuart, Olaijah Griffin, Chris Steele, Max Williams and Greg Johnson, to go along with safeties Talanoa Hufanga, Isaiah Pola-Mao and Chase Williams. Not all of those players will be available this spring, but we and the coaches should find out a lot about the majority of them.

“The Saturday practice, when we’re knocking the living heck out of each other, that’s when we’re going to find out what we’re all about,” Orlando said of the first padded practice of spring ball. “To me, it’s easy to go in here when it’s peaceful and non-chaotic. We want to create chaos and see if these guys can respond to it.”

While those players listed are almost all known entities to some degree, what’s unknown is whether they can be reliable entities in this defensive scheme, and with this defensive intensity. It’s tough to bet against them at this point, as these players will undoubtedly be fired up to play for a staff that had enough energy on a Tuesday morning outside of the football season, as some staffs seem to have walking out the tunnel for a rivalry game.

And that’s not manufactured, either.

“We’re all kind of cut from the same cloth,” So’oto said of the four defensive coaches. “We believe in violence and we believe in playing football a certain way.”

Williams and Naivar will work together plenty with the defensive backs, and that’s been a bond that formed quickly.

“Usually I’m used to being the most energetic person, especially when it comes to the secondary,” Williams said. “But, shoot, Craig’s more energetic than me. He’s every day. You almost feel like he’s jacked up on Mountain Dews and everything else and he hasn’t even had one.”

Gone are the days when USC could chalk up a win just by entering an opposing stadium, or count on opponent jitters when playing in the Coliseum. If the Trojans want to get back to holding that kind of advantage over the rest of the conference, it seems as though following the lead of these assistants is the best way to get there. And as football gets more spread out and some of the egregious violence has been eliminated, this staff clearly believes there is still very much a place for tough, physical, and yes, violent football.

Discuss this story on the WeAreSC message board