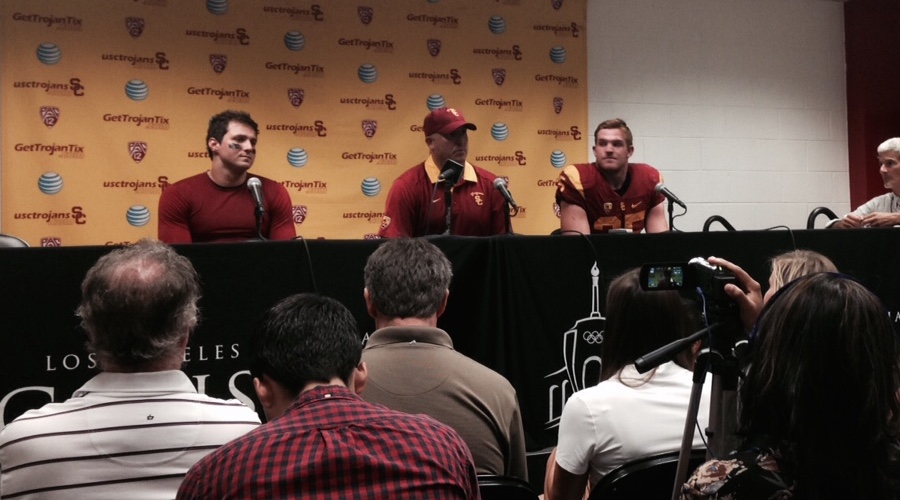 After suffering back-to-back losses to Washington and Notre Dame, the Trojans bounced back on Saturday night with one of their most complete performances of the season, taking down previously unbeaten No. 3 Utah, 42-24.

USC took control of the game in the second quarter, thanks in part to freshman linebacker Cameron Smith, who put on a show in the Coliseum. The Trojans trailed 14-7 when Smith picked off a pass by Utah quarterback Travis Wilson and returned it 41 yards to the Utes’ four-yard-line, with Soma Vainuku punching it in from the one-yard-line four plays later.

Following an explosive 18-yard touchdown run by Ronald Jones II that gave the Trojans a 21-14 lead, Smith got in the act again, intercepting another Wilson pass and taking it back for a 54-yard touchdown.

Smith, who also led USC with nine-tackles, added another interception in the fourth quarter, making him the first Trojans player since Jason Oliver in 1991 to compile three interceptions in one game.

Up 28-17 mid-way through the game, USC built off the momentum that they seized late in the first half, with Cody Kessler scoring on a one-yard sneak in the third quarter, and JuJu Smith-Schuster (8 Rec, 143 Yds) hauling in a 25-yard touchdown pass from the senior signal-caller in the fourth quarter.

Kessler finished 21-of-28 for 264 yards passing, and Jones led the Trojans with 73 yards rushing on 15 carries.

The Trojans also showed improvement on the defensive side of the ball on Saturday, coming up with four total interceptions on Wilson (24-36, 254 Yds, 2 TD, 4 INT), and holding Devontae Booker – who came into the game averaging 130.5 yards per game on the ground – to 62 yards on 14 carries.

The win gave Clay Helton his first at home as USC’s interim head coach, and the second of his career.

It wasn’t a completely perfect night for the Trojans, however, as center Toa Lobendahn (knee), tight end Taylor McNamara (shoulder), and safety Marvell Tell (shoulder) all went to the sideline with injuries during the contest.