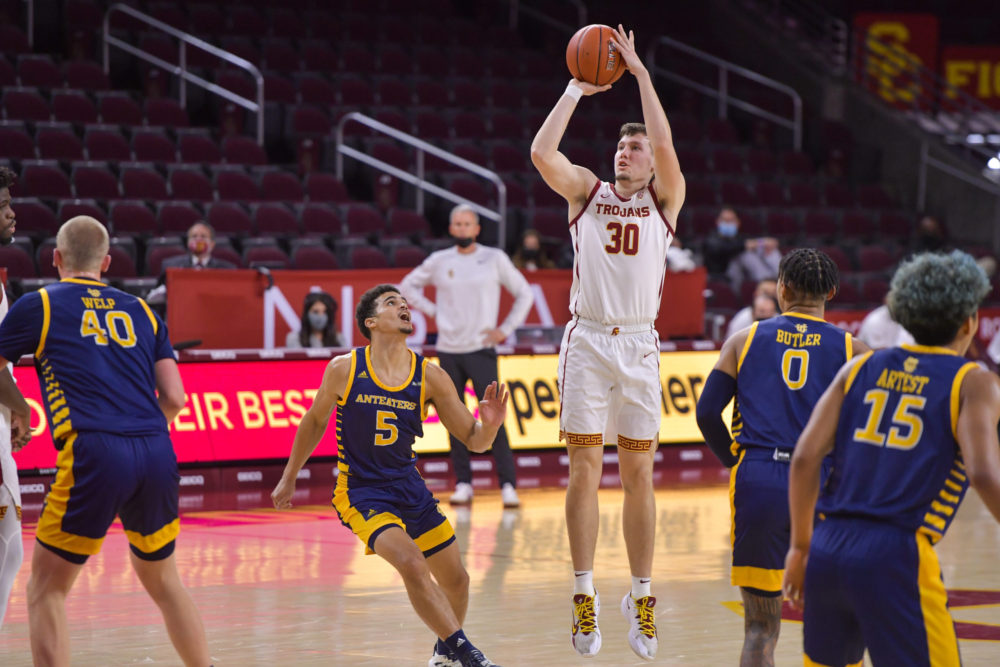 USC beat UCI 91-56 in a game that was as lopsided as the score. USC led by 25 at the half, and after the Anteaters closed to within 17, the Trojans pulled away to the final margin and improved to 4-1. The game was reminiscent of the recent win over BYU where everyone played well and contributed on both ends. USC had a 16-2 run in the first half to break the game open. The ‘Eaters came in averaging 92 point per game and the Trojans were giving up 66.

Ethan Anderson did not play and is day to day with back spasms. Noah Baumann and Max Agbonkpolo started in place of Tajh Eaddy, who was late to practice, and Isaiah White, who had moved into the starting lineup in place of Anderson. Coach Andy Enfield said that Isaiah had been sick and didn’t practice part of the week. He also wanted to shake things up on defense after the Trojans started slowly on the defensive end against UConn before settling in and defending very well. Drew Peterson was the primary ball handler most of the game.

The Trojans have played all five of their scheduled games so far while scores of games across the country have been cancelled or postponed.

The Trojans Played Well At Both Ends

USC completely dominated after the first few minutes. Enfield was “very impressed with the energy throughout the game”. They made 32 of their 62 shots from the field, were 12-24 from three and had 23 assists on their 32 made shots.  They had 8 more rebounds than the ‘Eaters and held UCI to 23-68 (33.8%) from the floor and 4-19 (21.1%) from three. The Trojans started in a man defense but played more zone over the course of the game. UCI only got to the foul line for 12 attempts while the Trojans shot 28 free throws. USC rotated eight players until the last five minutes when Boubacar Coulibaly came in.The eight rotation players each played 18 or more minutes.

Noah Baumann had his first extended playing time and shined. He made his first four shots from three and finished 5-9 from the field, 4-7 from three and from the 4-5 foul line. He scored 18 points in 25 minutes and showed more foot speed on defense than expected and did not have a turnover. Noah said that he has been working on his defensive intensity and positioning: “I’ve worked my tail off since I got here (in the summer of 2019).”

Noah said the coaches have encouraged him to take open shots and his confidence was boosted in this game. On one fast break Noah made a no look pass to Drew Peterson for the basket.

Tajh Eaddy had a slow first half offensively but picked it up after intermission. He made 3-4 from three and finished with 18 points. It is becoming clear that Tajh doesn’t handle the ball well enough to regularly play the point. Although Drew is not as quick, he does a better job of protecting the ball and finding open teammates.

Max had his most extended playing time. In 26 minutes he had 4 assists, rebounded well, and played with a lot of energy on both ends. His outside shooting isn’t where it should be yet but he is playing with more confidence. Chevez Goodwin and Isaiah White both played well off the bench.

Evan finished with 22 points, 3 offensive rebounds, 3 assists, 5 blocks and 2 made threes. After the game he was asked which part of his stat sheet was his favorite and he quickly said the blocked shots. He is working every day on mid range shots and shots from beyond the arc.

The Trojans Still Have Some Issues To Address

After a very good performance it’s not completely fair to emphasize the few negatives but there are a issues that need to be addressed if the Trojans want to have have a big season.

Coming into the game USC had 42 more rebounds than its opponents but had two less offensive rebounds in the first four games. Against a far less athletic UCI team this trend continued. The Trojans had 11 offensive boards to the ‘Eaters 13. Enfield has said that he isn’t concerned because the other team is generally missing far more shots and has more opportunities for offensive boards. While this is true, it isn’t the entire answer. On some possessions the Trojans battle to control their defensive board but on others they have been more complacent.

Another issue is at the free throw line. The Trojans made only 15 of 28 foul shots, continuing a trend which is frustrating the coaches. A loss or two is coming if the Trojans can’t close out a game from the line.

The third concern is Isaiah Mobley’s poor shooting from the floor and the line. He is playing with much more confidence and energy this season, doing a good job defensively and is getting a lot of rebounds, but he is missing too many shots near the rim and is poor from the line. Enfield said that Isaiah “just needs to make his shots. He is a better player than that. He is missing easy shots and his field goal percentage is too low.”

Final Thoughts On The Game

This team is becoming very good on the defensive end. Before the first game Enfield said that the defense might be better than last season when the Trojans were one of the better defensive teams in the country. Certainly this season’s zone defense is much better and will be used much more than last year. Since the Cal Baptist game the Trojans have played very good defense. Enfield said that the team “played good enough defense to beat UConn.” After the UCI win he said that everyone played hard. “The zone press gave them issues” and resulted in a few turnovers and easy baskets.

Player Of The Week

The Trojans don’t play again until next Sunday in the Pac 12 opener for both USC and Stanford. They also host USF later in the week.

With only the UCI game to consider this week the WeAreSC Player of the Week resulted in a very close vote. Evan Mobley becomes the first player ever to win the award in two straight weeks, barely beating out Noah Baumann in a 1-0 vote. It’s hard not to honor Noah’s breakout game, but Evan’s all around performance won out.

Update On Former And Future Trojans

All time great and basketball Hall Of Famer Paul Westphal was diagnosed with brain cancer over the summer.

Chuck O’Bannon is averaging over 6 points and almost 6 rebounds for TCU in 15 minutes a game. He is making only 32% of his shots.

Kyle Sturdivant is making 62% of his shots and is averaging 5 points and 1 assist at Georgia Tech.

Elijah Weaver is red shirting this season at Dayton.

Malik Thomas (“The Chosen 1”), a 6’5” guard, is continuing his great play for Veritas Prep. In the recently completed four game session of The Grind in Arizona. He scored 35 points with 11 rebounds and 5 assists in one game, scored 32 in another, had 26 points and 12 rebounds in a third game and scored 16 points in the fourth game. He should continue to move up the recruiting rankings.

Reece Dixon-Waters is another 6’5” guard who is considered an elite scorer. He is strictly an off guard, and is not playing at St Bernard because sports have not yet been played in Southern California this school year.

The two four star guards may be the best pair of guards in one recruiting class signed by the Trojans in decades.