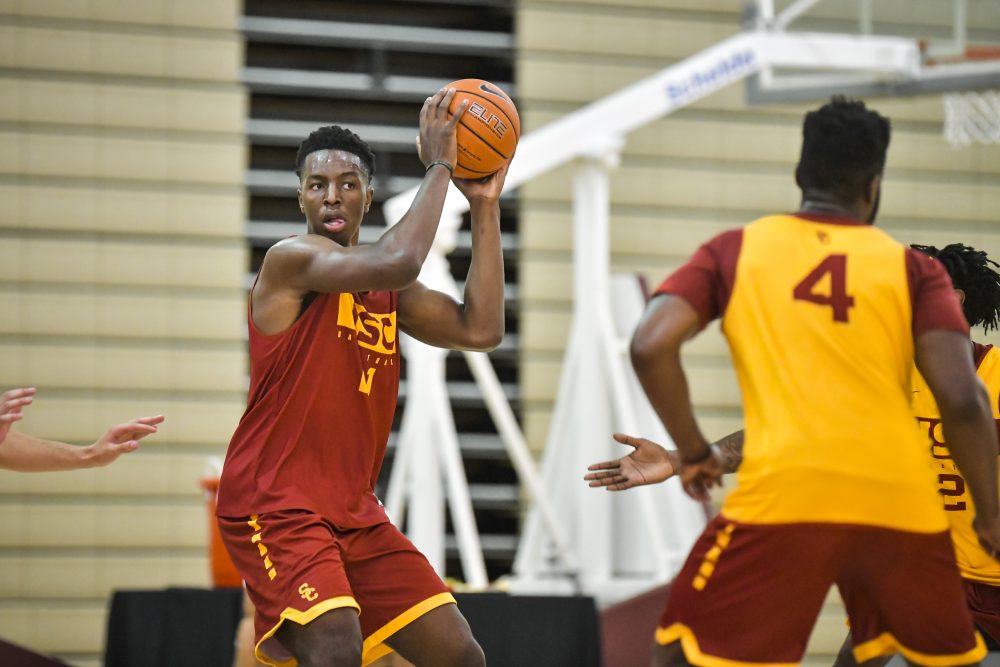 The Trojans bounced back from their worst performance of the young season against Marquette on Friday with a very convincing 77-62 win over a good Harvard team, and are now 7-2. With the win, USC finished in third place in the Orlando Invitational, having gone 2-1 at the event, with wins over Fairfield and Harvard, and a loss to Marquette. Harvard is the preseason favorite in the Ivy League and entered the game ranked 81 in ESPN’s Basketball Power Index (BPI), compared to SC’s 61 ranking. Troy led by as many as 25 in the second half, and by over 20 until the final few minutes. Onyeka Okongwu was dominate. Big O had 21 points on 9-10 from the field and 9 rebounds in the first half, and finished with 27 and 14, on 12-14 from the field.

The Trojans led 51-43 at the half in what looked like another very high scoring game, but both teams cooled off after the half. There was a lot to like in this game. The Trojans dominated the boards, out rebounding the Crimson by 14. The margin was 22-9 at the half. Many of Harvard’s rebounds came after the game was decided. Isaiah Mobley was big on the boards with 11, along with 8 points. SC’s two grad transfers found their shooting touch. Quinton Adlesh made 4-6 threes, and Daniel Utomi was 2-4. Hopefully this marks a turning point and the Trojans shoot better from the perimeter for the rest of the season.

Neither team shot the ball well in the second half. Harvard had only 2 points in the first 12 minutes of the second half, and scored most of their 19 second half points well after the game was decided. Several of the other Trojans also played well. Ethan Anderson didn’t score, but had a good game handling the ball with 4 assists and no turnovers. Nick Rakocevic had 9 points and 8 rebounds, though he made only 3-10 from the field. And Jonah Mathews contributed 12 points in the first half, including 1-4 from three, but didn’t score in the second half.

The Trojans won two of three in Orlando, which was the minimum for a successful trip. The next game is on Friday at TCU, which will provide the Trojans with another opportunity to pick up a good win away from home.

The Trojans can point to some impressive positives from this game and from the trip, but there were also some negatives. Let’s look at the positives and then the negatives.

Through games coming into this weekend, TCU was ranked no 60 in the BPI Index, just ahead of the Trojans. They are 5-1, losing to Clemson by two in their only game away from home. Their best win was by one point over a good UCI team at home. They host Illinois State on Tuesday before Troy comes to town. The Trojans will be the best team the Frogs have played.

If the Trojans can find a way to pair their first half offense with their second half defense from the Harvard game they can be very formidable. The Trojans will continue to need good inside production from Big O and Isaiah, and more consistency from Nick. In a few games, Nick has been the best player on the court. It was a very good sign that Q and Daniel made six threes between them. I believe that perimeter scoring and defense remain the key to the season. This game showed the Trojans what they can become if they play hard for 40 minutes on both ends. With only four non conference games left, the game at TCU and the one against LSU at Staples later in the month are very important in building their NCAA resume.