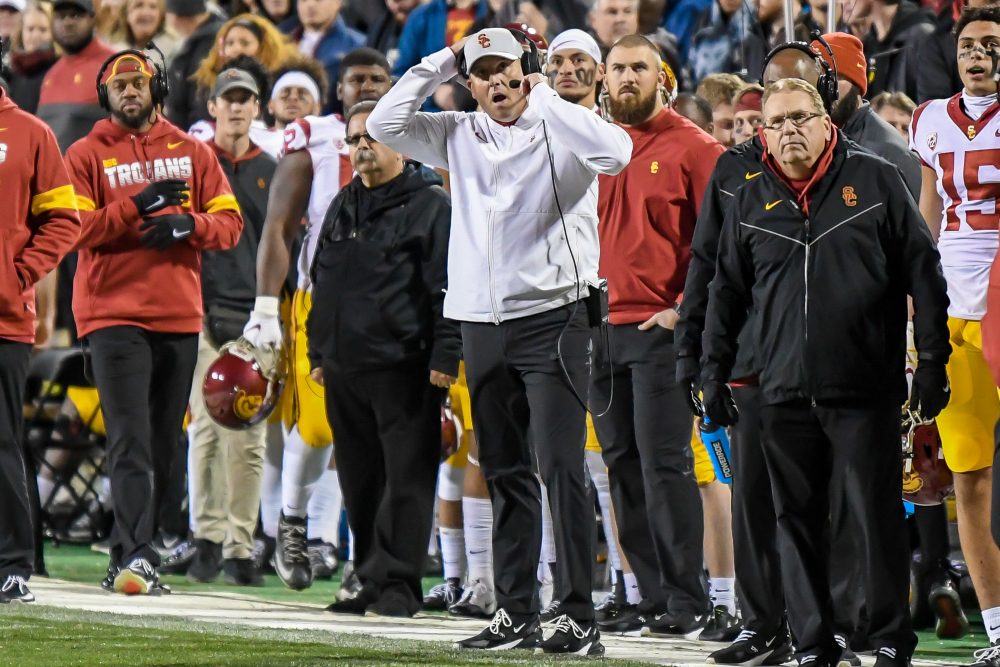 A few months ago, USC’s 2020 football schedule looked like one of the toughest in the nation. This is a Trojan team very much looking forward to proving that wholesale changes on the defensive side of the ball and a returning, veteran offense could potentially do more than just win the Pac-12 conference.

But no matter how much improvement this team saw from an eight-win group in 2019, the challenge this fall was going to be daunting. A neutral site game against Alabama and a home game against Notre Dame gave USC one of the toughest non-conference schedules in the nation, even with a virtual gimme game against New Mexico.

In conference play, USC would be challenged immediately, as Stanford once again kicked off USC’s Pac-12 schedule, and then the following two weeks might have settled USC’s fortunes in the Pac-12 South race by very early October, as the Trojans were set to host Arizona State and then travel to Utah.

Oregon and Washington aren’t always the two strongest teams in the Pacific Northwest, but they certainly are right now, so it’s a more difficult two years in that rotation when the Trojans draw the Huskies and Ducks rather than Oregon State and Washington State.

But with the Pac-12’s decision to limit this fall to a conference-only schedule, USC said goodbye to potentially two of its toughest three games, as Alabama and Notre Dame are no longer waiting.

This team absolutely wanted to test itself against Alabama and there was a real belief among the players that they would have been ready to go up against the Crimson Tide. There’s no joy in not getting to see how that game would have played out, but clearly losing that game is a net positive for USC’s potential win-loss record.

Losing the Notre Dame game would clearly be the biggest disappointment, as the Trojans and Fighting Irish have played every year since 1946. Notre Dame is on a three-game winning streak against USC, and has won seven of the last ten meetings. Notre Dame should be good again this fall, but worse USC teams than what will head out there this fall have kept it very close against Notre Dame each of the past two years.

But that’s just the start of where the revised schedule should benefit the Trojans.

There have been reports that the Pac-12 will add a conference game for each team, giving everybody 10 games rather than nine, and look to set each program with five home and five away games. If that holds true, USC would add another home game to its schedule.

A report came out Friday from Stadium’s Brett McMurphy that USC’s proposed tenth game would be against Washington State. In terms of Oregon State or Washington State–the two potential additions to USC’s 2020 conference schedule–getting the team coming off a 6-7 season where it allowed more than 30 points per game and now has a first-year head coach would seem to be preferable to one that improved by three wins under a second-year coach and could still be trending upward.

And where USC truly benefits is from the tenth game given to the rest of its Pac-12 South competition.

USC’s misses in conference play might have been the worst combination in terms of teams they’d rather play, and maybe only Cal–missing Arizona and Colorado–has an argument. That meant that every other Pac-12 South team missed at least one of the North powers.

Now, based on the proposed matchups, Arizona State will face Stanford (and miss Washington) and Utah will take on Oregon (missing Stanford). Clearly with the schedule it had set for itself, USC wasn’t looking for anybody to do it any favors this season. But if those extra games push its division rivals a little more and create some room for error, the Trojans will gladly accept.

It’ll be interesting to see if there is any significant shuffling of USC’s schedule in terms of the order of opponents, or if Washington State slips in at the end to replace Notre Dame. If it remains as is, USC’s will still be off and running this year with road trips to Stanford and Utah sandwiched around a home game against Arizona State as its first three games. But no matter what the final schedule looks like, the Trojans will–and should–be feeling better about their chances of making a run at the Pac-12 title this fall. The Pac-12 Championship game is still scheduled to take place, though there is a report that the conference could be flexible in its date, potentially allowing it to take place on any of the first three Fridays in December.

This would still rank as one of the tougher road schedules in the conference, simply based on trips to Eugene and Salt Lake City. But it’s manageable, especially for a team that believes it’s ready to take a major step forward in Year 2 of Graham Harrell’s offense and the first year under defensive coordinator Todd Orlando.

If a home game against Washington State is indeed added to what USC’s Pac-12 schedule already holds, the Trojans will make trips to Stanford, Utah, Arizona, Oregon and UCLA, and host Arizona State, Cal, Colorado, Washington and Washington State.