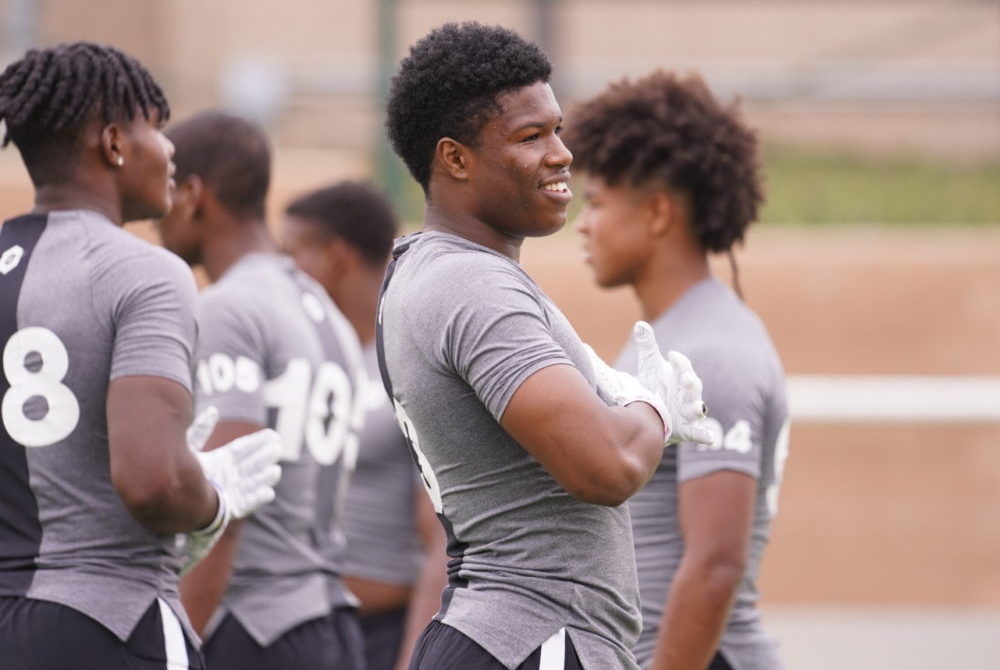 Running back Raleek Brown was one of the showstoppers at The Opening on Friday morning, standing out amongst a collection of some of the top high school football prospects in the country. He ran a 4.43 40-yard dash and was absolutely unstoppable as a pass catcher going one-on-one against linebackers. And he did it all at much less than 100% healthy, which led to him sitting out the 7-on-7 portion of the event.

But the 5-foot-8, 185-pound Brown had made his mark, once again showing why he’s the No. 47 overall prospect in the country, and why USC is working hard to flip him from the Oklahoma commitment he made this past February.

Brown said after the event that he never really saw his Oklahoma commit coming. He grew up a USC fan and said that was one of his dream schools.

“Then Oklahoma offered me, so it was different,” Brown said. “Everything went left. Everything changed.”

But USC has remained in the picture and the Trojan coaches have turned up the heat in recent weeks. In June, Brown took an official visit and unofficial visit to USC.

“Nothing really stood out to me because I’ve been going there for so long,” Brown said. “But I enjoyed it. Every time I go there I enjoy it. It’s fun.”

Nothing has changed in terms of his Oklahoma commitment, but USC should be seen as a real contender for him and Brown said those are the two schools he’s continuing to look at. As for a timeline on when he could make his ultimate decision, he said he knows a lot of things could change over the next few months between now and signing day, so it might be something that goes all the way until then.

“It’s how I feel before signing day, whether I want to stay home,” Brown said.

If he does elect to stay home, it could be in part because of the big goals the USC coaches have in mind for him.

Brown said the Trojans have captured his attention somewhat with their pitch for his involvement in the offense. Brown said he was able to watch some film of USC’s spring ball with running backs coach Mike Jinks and said he thought the “offense looked better than last year…It looked way better.”

Brown said he liked how the running backs were being used in the offense, and could also picture the vision the USC coaches laid out for him, adding that the Trojans want to use him like the New Orleans Saints use Alvin Kamara, who had 932 rushing and 756 receiving yards last season, his fourth-consecutive season with at least 700 rushing and 500 receiving yards. That would mean lining up in the backfield, in the slot, out wide, or being used in motion.

After splitting time with senior Marceese Yetts at Mater Dei this past spring, Brown could be in line to shoulder much more of the load as a senior. In five games, Brown had 367 rushing yards and five touchdowns to go along with eight receptions for 85 yards. It was Brown’s first season at Mater Dei after he moved to Southern California from Stockton (Calif.) Edison. There, he ran for 1,688 yards and 18 touchdowns as a freshman and then 996 and 16 touchdowns (plus 667 receiving yards and nine more scores) as a sophomore.

The step up in competition didn’t allow him to run for 10+ yards per carry this year (he still averaged 6.9 yards), but Brown said it was what he was looking for.

“There’s a lot of competition,” Brown said of playing at Mater Dei and in the Trinity League. “It’s active down here. Mater Dei is a different ballgame. I like it though. It’s going to get me ready for college.”

One thing Brown said he’s not doing right now is looking at the other running backs being targeted by Oklahoma or USC. The Sooners recently landed a commitment from four-star prospect Gavin Sawchuk (Littleton, Colo./Valor Christian). USC grabbed one from three-star back De’Anthony Gatson (Newton, Tex./Newton). Both programs clearly have room for more than one back in this class and with Brown’s ability to play that do-it-all role on offense, the Trojans would still be able to chase four-star running back Jovantae Barnes (Las Vegas/Desert Pines).

“I really don’t look at recruiting,” Brown said of who else might be in his class. “You’re going to have to compete no matter what. It is what it is.”