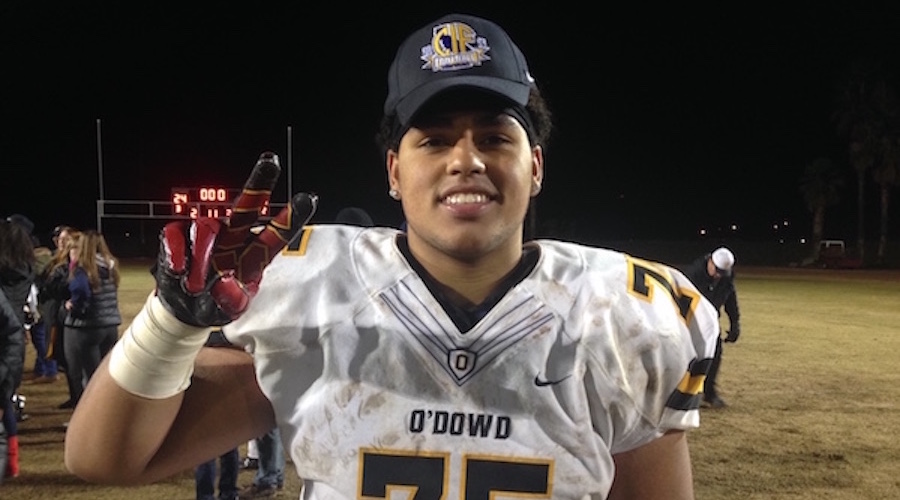 Class of 2017 offensive lineman and USC commit Alijah Vera-Tucker saw his high school career at Oakland (Calif.) Bishop O’Dowd come to a close this past Saturday night, and in the most gratifying way imaginable – with his team taking down Moreno Valley (Calif.) Valley View 43-24 on the road in the CIF-State Division 5-AA championship game.

“Since February, Coach [Napoleon Kaufman] has been saying that he’s going to send the seniors out right, and that’s exactly what happened,” Vera-Tucker said. “I’ve been playing football with my brothers for four years now, and it’s just great to know that we’re going to get those rings.”

Serving as the anchor of the Dragons’ offensive line from his left tackle spot, Vera-Tucker certainly did more than his part in the big victory, even after his already sore ankle was rolled up on from behind late in the first quarter. In obvious pain initially, he fought through it and didn’t appear to be slowed a bit, finishing the game off strong.

“I definitely wasn’t coming out in the state title game,” Vera-Tucker said. “I just wanted to get the win for all of my brothers. With all the seniors that I’ve been with from Day 1, it’s just a great feeling.”

With his final season on the field for Bishop O’Dowd complete, Vera-Tucker can now turn his focus toward the future. Having committed to USC head coach Clay Helton and staff this past August, he says that his pledge remains completely solid.

“I’m 110 percent committed to USC,” Vera-Tucker said. “I love the staff, I love Coach Helton and I love [offensive line] Coach [Neil] Callaway. Whenever I’ve been up there everybody has been so great. I really feel like it’s going to be another family for me to join, and I just feel like I fit in there really well.”

Targeted by the Trojans as a tackle, with the possibility of lining up at guard having also been discussed, the 6-foot-4, 290-pound Vera-Tucker has been in near-constant contact with the staff since the time of his pledge, with the relationship growing stronger and stronger.

“I’m mostly in touch with Coach Callaway, but really the whole staff…Coach Helton, [Offensive Coordinator] Tee Martin and [High School Relations Coordinator] Gavin Morris,” Vera-Tucker said. “Every week we talk more and more on the phone, which is great, so when I go up there I feel like I’ll fit right in, get to work, and I’m ready for that.”

Having made the trek down to USC twice in recent months to check out the Trojans in action, including for the team’s 45-27 victory over Notre Dame, Vera-Tucker is extremely encouraged by the direction that the program appears to be headed in under Helton.

“With the 1-3 start I was still 100 percent committed, but to see how Coach Helton turned things around has been great,” Vera-Tucker said. “When I get up there SC is going to be a hot program.”

At the same time, Vera-Tucker does have tentative plans to take official visits to two other schools in January, although it certainly appears as though something drastic would have to happen for his pledge to the Trojans to be rattled in any way.

“I think I’m going to take an official to ASU and to Cal,” Vera-Tucker said. “The thought process behind that is just about having fun and being a recruit, but trust me, I’m still committed to SC.”

As for his official visit to USC, that will take place on the weekend of Jan. 20 – at the same time as a number of other Trojans pledges, many of whom he’s grown close to in recent months.

“You know, we have an SC group chat, Hunter [Echols] is in there, Stephen Carr, Brett Neilon, Andrew Vorhees, and so many other guys,” Vera-Tucker said. “Our relationship is just really great. When we go up there we’re all already going to know each other, and we just know we’re all going to be ready to ball out.”

Along with players like Echols and Neilon, who are known to be vocal recruiters for USC, Vera-Tucker is doing his best to try to get some uncommitted targets on board. And with a buzz around the program right now, he feels like he’s going to be a part of an extremely loaded class for the Trojans.

“We’re trying to get Austin Jackson, Je’Quari Godfrey on my team, and then Levi Jones…and there’s a whole bunch of other guys we’re trying to recruit too,” Vera-Tucker said. “I feel like once they go on that official visit they’re going to love SC. I feel like we’re going to finish off strong.”

After a prior in-home visit with the Trojans had to be cancelled due to a scheduling conflict with one of his playoff games, Vera-Tucker said that he is expecting to host the staff soon after the current recruiting dead period ends on Jan. 11.

Before that, Vera-Tucker will play in the Under Armour All-America Game in Orlando, Fla. on Sunday, Jan. 1.