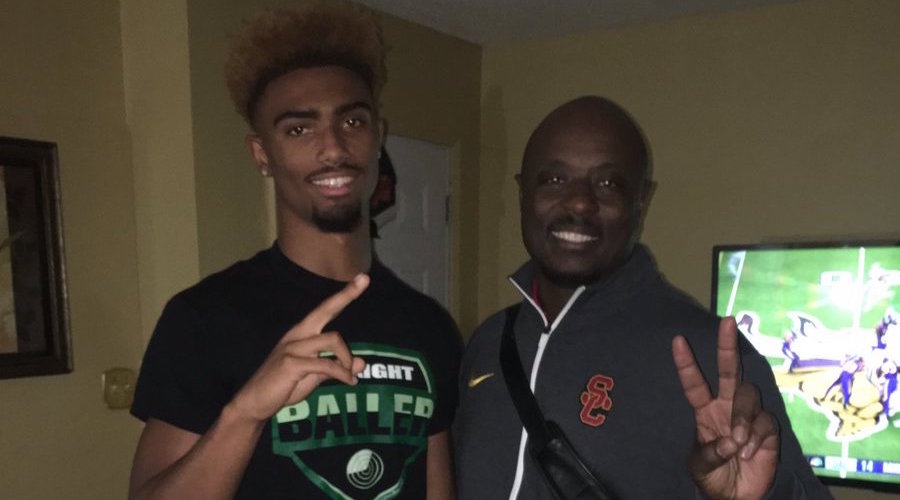 The recruitment of Class of 2017 cornerback Elijah Blades has been kicked into overdrive over the course of the last week-and-a-half, with the Florida-commit hosting what has seemed like an endless stream of college coaches for in-home visits. The Gators are among those to be represented, not to mention USC, Nebraska and Utah just to name a few.

And while Blades’ hectic schedule might seem more than a little difficult to handle to most, the Pasadena (Calif.) Muir standout has learned to take it all in stride.

“I never look at it as a bad thing,” Blades said. “I just like to have fun with it. I just see it as an opportunity for my parents to have a chance to talk to the coaches, because they’ve never had that before. It’s really a great experience.”

Blades committed to Florida this past June, but he’s remained in contact with a number of other top programs from across the country. That includes the Trojans coaching staff, which has come after him in a major way over the last two months, in particular.

“They’ve been in contact with me every day, so I could say they really want me,” said Blades, who took in the Trojans’ victory over Colorado in the Coliseum this past October. “Every time I go up to USC they always show me love.”

With Blades standing 6-foot-3, USC defensive backs coach Ronnie Bradford has made it clear that he covets the unique combination of size and athleticism that he brings to the table at the cornerback position.

“Coach Bradford, that’s what he’s recruiting this year – bigger DBs,” Blades said. “That’s part of why they’re after me so hard.”

Not surprisingly, it’s Bradford who has been in contact with Blades most often from the USC staff throughout the process, and he was also the coach that was in-home with Blades this past Thursday night.

“Coach Bradford, it’s always good to see him,” Blades said. “He always has a smile on his face and we always talk a lot. Basically he just told me that he might have a couple starters leaving, and then I can possibly come in and have a chance to play as a freshman. And then even after football, the degree from SC is great.”

It’s that academic reputation that has Blades particularly intrigued by the Trojans, not to mention the history of the USC football program.

“I like that you can basically get a job anywhere,” Blades said. “And then just the tradition of SC, I’ve looked into that. All of the great players that have been there, you can see the Heismans and everything. Then with the draft, they told me they have connections with every NFL team, so it opens up getting a shot in the NFL.”

Blades has also taken notice of the Trojans’ dramatic turnaround on the field. Winning only one of their first four games to start the season, USC head coach Clay Helton and Co. have now reeled off eight consecutive wins, and they’ll next face Penn State in Blades’ hometown of Pasadena on Jan. 2 in the Rose Bowl.

“Coach Helton did a great job,” Blades said. “I didn’t think they were going to do that this year after the 1-3 start, but he turned the guys around, they got it together and showed everyone how USC used to be.”

With all that said, Blades is quick to point out that Florida is still in the drivers’ seat when it comes to his recruitment, and he considers himself solidly committed to the Gators for a variety of reasons.

But the recruiting process obviously isn’t completely over for Blades. He already took an official visit to Utah this past September, and he has upcoming officials scheduled to Washington State for this weekend, Florida on the weekend of Jan. 13, and then USC on the weekend of Jan. 20. Blades will also visit Nebraska, although the specific date for that trip has not been set.