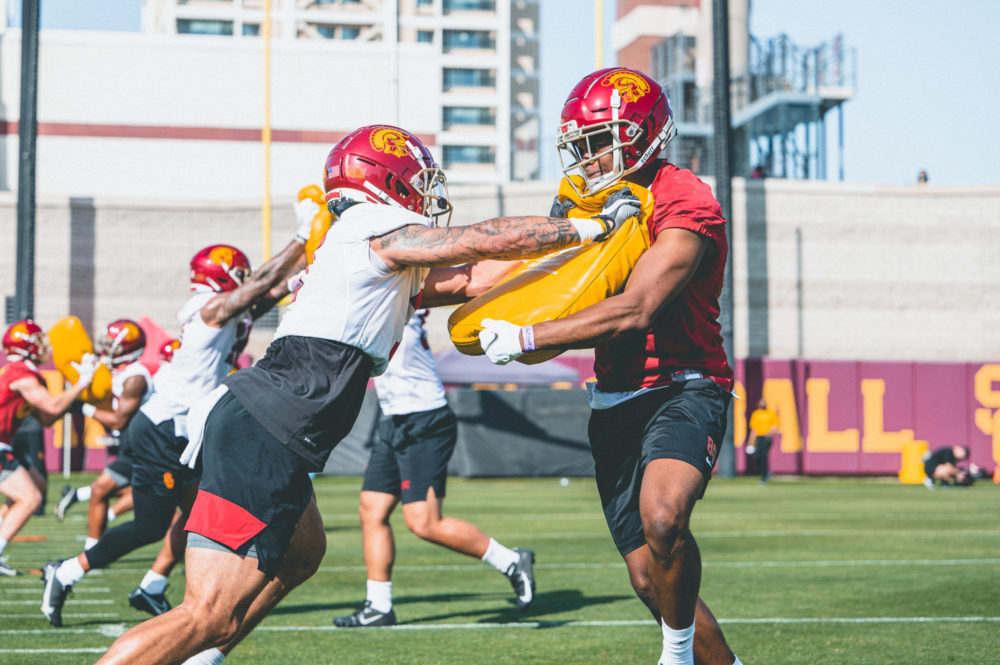 USC’s defensive staff is getting its first crack at a true spring ball this season, as these five weeks and 15 practices take on even more importance due to last year’s shut down, where USC’s spring ball was canceled after just one practice.

Defensive coordinator Todd Orlando believes spring ball is all about installing the culture necessary to produce a successful football team. Without spring ball last year, the new staff, which had an immediate and profound impact on the program, was unable to really set the tone for what they wanted on that side of the ball. The hope this spring is that the coaching staff gets a second bite at the apple, which Orlando said isn’t usually possible.

“You only have one shot at it when you come in as a new guy,” Orlando said of installing the culture the coaches want in a program. “If it’s not set in stone, it’s hard to fix. You can’t come back. You can’t do things soft and then come back a year later and say, We’re going to start hardening up. When you first get here, it’s got to be hard.”

Orlando said last year’s one and only spring ball practice was a positive step, but it ultimately rang hollow for a coach who clearly doesn’t believe anything can be determined without pads on and moving full speed. And in the spring, plays and scheme and position fits and on-field performance is important, but it clearly takes a back seat to establishing culture for Orlando.

“Spring is all culture,” Orlando said. “Plays are good, but you’re training people how to do things.”

When the rest of spring was cut short, the coaches faced a dilemma on how to get that “toughness, disciplined, united” theme installed during fall camp.

“Once [spring is] taken away from you, you get into fall camp and you go halfway through the wintertime and it’s like, are we going to train culture when we have a game in four weeks? So we take the first two weeks of it and it almost hurt us. Because you’re going through some things and you’re teaching them how to be tough, but in the back of your head, you’re saying, we have a game in two weeks. We have to make sure we have a ball club to put out there for the game and we don’t tax these guys so much.”

Orlando said the buy in from the players into the new strength and conditioning staff has been positive and the feeling in the program overall is that these last eight weeks have been a real benefit. That, combined with the obvious uptick in effort, desire and competitiveness this past fall, hopefully has the Trojans ready to fully dive into what’s coming this spring.

“Having a full 15 practices just to teach [culture] is going to make it a lot easier in fall camp, where fall camp might be only one week of just hardening, sharpening that sword and then taking three weeks and getting ready for an opponent or just modifying things that way,” Orlando said. “That was probably the advantage right now of being able to do this for the next month is going to be huge for us, because we’ll see the dividends on the back end when we get into fall camp.”

But what exactly does “culture” entail? That’s where the separation can begin as USC looks to make its way back to the top of the Pac-12 standings and into the national discussion. It’s a word or concept that can be a little ambiguous at times, but the best programs in the country have it easily defined for what it means to them. It seems like Orlando has it pretty dialed in as well, and it’s worth noting his entire thought process as the Trojans look to take another major step forward in 2021:

“For us, it’s tough, disciplined, united,” Orlando said. “That’s what it is, but more importantly than anything else is, there’s only one person that holds up a trophy at the end of the year. Human nature, most of the time, especially with younger people says that I can do B work and please leave me alone, I’m doing B work, when they really can do A+ work, which is really hard. A lot of people shy away from that. So what were trying to preach is that every day you come in there, it’s fourth and inches, game on the line. If you train that way, and maybe you fall short of doing A+ work and it’s an A. Well that’s way better than a B. And if you get enough people doing that, then you can hold up that trophy at the end of the year.

“And that’s all trainable stuff. I think that people get so consumed in the athletic part of it, the actual plays themselves, when the majority of the time where you fail on a play is because internally, you’re not on point. And that stuff, every day, whether it is being disciplined enough to wake up in the morning and grab your breakfast and go to all your classes, to have your camera on in a Zoom. It’s all trainable stuff. So that’s the biggest thing from our standpoint is human nature says to do things a little easier, but you’ve always got more.

“And as we go onto the field and we start to establish, that to me is the culture of being able to go really, really hard 4-to-6, A to B, and that’s what we’ve talked about. And there’s only one way. It can’t be words. You have to train that, and that’s what we’re trying to do every day. And if you do that at a high level — human nature is not any different in football than it is outside of football. It’s all one in the same. If you’re lax outside the game, some point you’ll be lax. Even though you care about ball maybe a little bit more than maybe something else in your life, you’re wiring is all the same. And that takes time. And that’s what spring football is all about.

“To have 15 days of just going at it and doing things that kind of defy human nature. And if you can do that, when you line up versus your opponent, you’re hoping your opponent has done things – B+ or B work and you can beat them on that individual play. And that’s the part of coaching that’s really, really tough, and the acceptance of the players like the Kana’i [Mauga’s] and those things. Once you get older and you get a little taste of the championship and you get close to it and you understand that a handful of plays here and there, and how do we get those plays. That’s how you get those plays and that’s the tough part about it. And that’s why we’re going to train like crazy, and I expect these upperclassmen, the guys that have been around here, especially the guys with their clocks running a little bit low, to really emphasize that, especially with our young guys.”