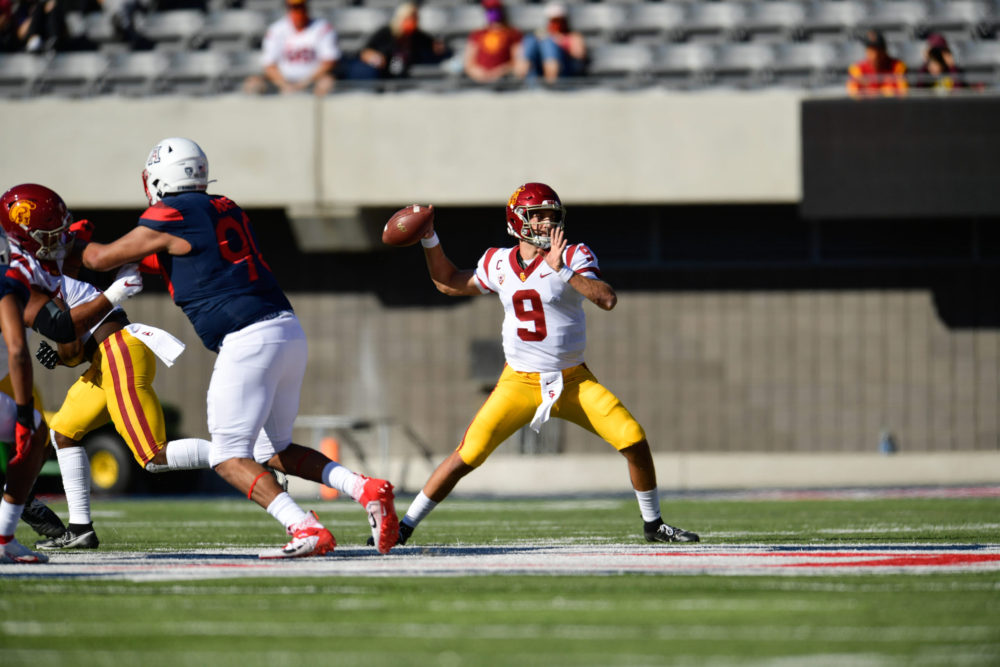 It’s been an impossible sight to miss over the first two games of USC’s season. Quarterback Kedon Slovis, typically a human teaching tape on how to perfectly throw a football, launching wobbly passes all over the field that occasionally look more like punts. In one instance, Amon-Ra St. Brown needed to box out a cornerback in order to bat away a ball that hung in the air for so long he had to completely stop his route and wait for the ball to come down. On several other throws, the intended receiver has been difficult to identify.

What’s made it so striking is that since his very first throw when he arrived for spring ball as a true freshman, the one thing that stood out above anything else regarding Slovis is how pure his delivery is and how smoothly the ball comes out of his hand. It also speaks to his immense talent that he was able to overcome this throwing issue in order to complete passes when the team needed it most, leading USC to now two game-winning touchdown drives in two weeks–largely thanks to his arm.

Slovis finished the Arizona game by completing 12-straight passes and went 13-of-14 on the final two drives, with the one incompletion going down as a dropped pass.

But questions have been flying as often as USC passes following that win against Arizona. And USC personnel have been as straightforward in the consistency of their answers as one of these aforementioned wobbly passes.

The immediate concern was injury. Slovis suffered a strained elbow that knocked him out of the Holiday Bowl against Iowa late last December. Though the injury required no surgery, Slovis did say the recovery process took longer than he thought it would. But Slovis immediately dismissed any notion that injury could be the cause of the wayward passes following the game at Arizona.

“My arm feels fine,” Slovis said after the game, as he pivoted the explanation toward mechanics. “I think at times my mechanics get sloppy…I don’t know what it is but I’ll get it fixed next week.”

But as quickly as Slovis shot down the thought that an injury could be to blame, offensive coordinator Graham Harrell on Tuesday morning took the same approach with the idea that it could be mechanics.

“There’s nothing wrong with Kedon’s mechanics, so I don’t know where he pulled that out of,” Harrell said. “I watch him throw every day and it’s not a mechanic thing, that’s for certain. I’m not concerned about mechanics at all, to be honest with you.”

Harrell said his believe is that the ball slipped out of Slovis’ hands on one throw and then it became a mental issue.

“That’s just something that quarterbacks and certain positions in certain sports can be head cases at times or can get in their own head,” Harrell said. “I think more than anything it kind of got in his head because I think early on a ball probably slipped out of his hand and then he thought about it too much. But there’s nothing wrong with Kedon’s mechanics.”

Head coach Clay Helton took a different approach. Following the game on Saturday, Helton said he believed that a slick ball contributed to the throwing errors.

“In visiting with Kedon postgame, it had to do more with the tackiness of the ball,” Helton said, mentioning that the atmosphere in Tucson was dry and windy. “He didn’t feel confident with that. We had some newer balls that were out there, some slick balls. And he was managing through that.”

Teams are able to provide their own game balls to use while on offense and Helton said they’ve already begun the process of selecting the balls for Saturday’s game at Utah, making sure Slovis feels comfortable with the grip on each. The trip to Utah will present its own challenges as far as gripping the football, as the game is scheduled to kick off at 8:30 pm local time and the nightime low on Saturday night looks to be around 25 degrees.

All eyes will be on that football coming out of Slovis’ hand on his first pass, but he and his coaches are confident that it’ll be the tight spiral that USC fans had become accustomed to seeing from the sophomore quarterback.

“I think it is a one-time thing, to be honest with you, that you’ll see,” Helton said, adding that it was a non-issue during Monday’s practice. “He spun it as pretty as I’ve ever seen last night.”