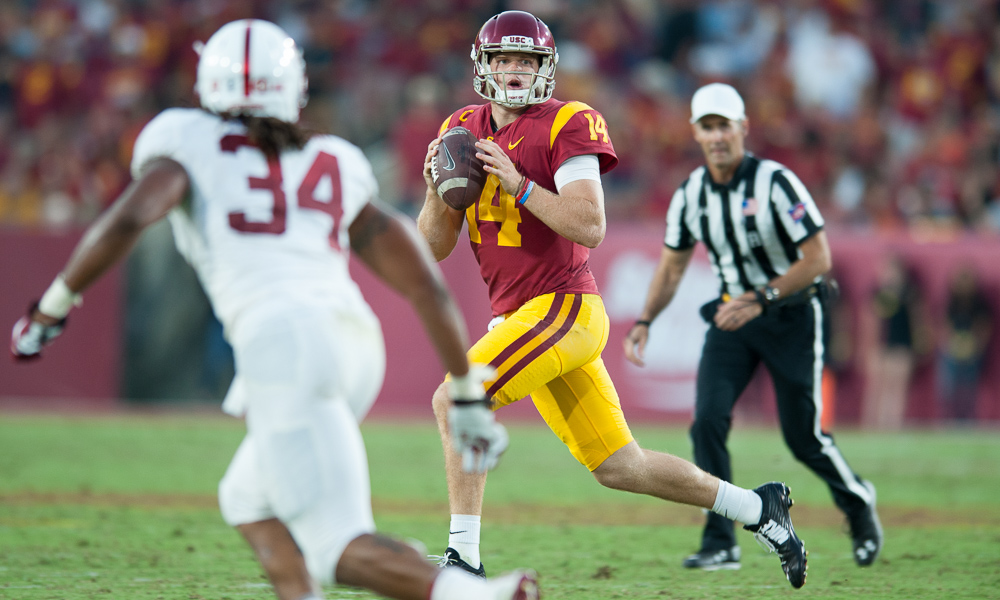 Every year around this time, USC coaches and personnel are able to flaunt the Trojans success in the NFL Draft as a recruiting pitch to prospects. This year, while USC could lose its grip on the overall lead in first-round draft choices, the Trojans likely will continue its lead in total NFL Draft selections.

USC could go position-by-position with every program in the country when it comes to number of draft picks, but on Wednesday, USC coaches pushed two positions in particular.

As for quarterbacks, Offensive Quality Control Analyst and quarterback assistant Seth Doege highlighted USC’s success over the past two decades in getting signal-callers into the NFL.

It has been a tremendously impressive run at quarterback for USC, with Carson Palmer, Matt Leinart, Mark Sanchez and Sam Darnold all going as first-round selections in that time.

That streak has technically been broken a few times, as Aaron Corp, Mitch Mustain, Max Wittek and Max Browne all started at least once for USC and went undrafted. But the streak is true of any USC quarterback to start more than four games for the Trojans during that time. Recently, there has been a bit of a revolving door at the position for USC, as four different quarterbacks have started games over the past two seasons.

But there is no doubt about the future of the position now. Kedon Slovis has a firm grip on the spot, as former starter JT Daniels elected to enter his name in the transfer portal.

The push to highlight quarterback success at USC is important right now, as the Trojans are working to sign two signal-callers in this 2021 class. USC already holds a commitment from four-star quarterback Jake Garcia (La Habra, Calif./La Habra) and is hopeful to reel in fellow four-star and in-state quarterback Miller Moss (Mission Hills, Calif./Alemany).