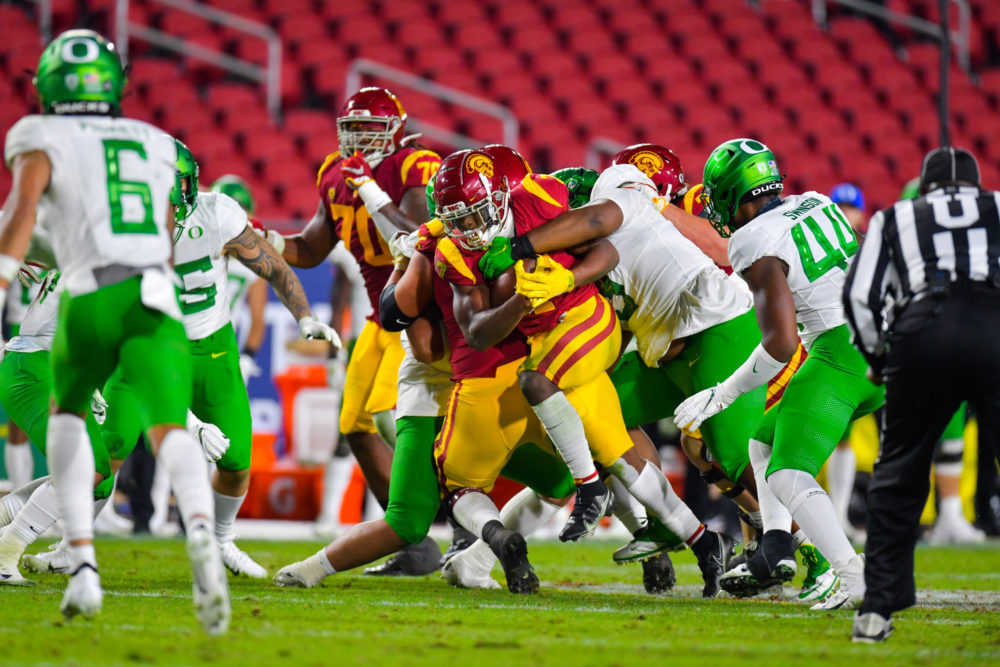 For the first time this season, the USC Trojans couldn’t quite muster enough late-game magic to overcome a slow start, as the Oregon Ducks held on for a 31-24 win in Friday night’s Pac-12 Championship Game.

Kedon Slovis threw three costly interceptions, the Trojans committed nine penalties for 98 yards and rushed for just 38 yards in suffering their first loss of the 2020 season and allowing the Ducks to win the Pac-12 title at the Coliseum.

“There’s a lot of hurt souls in our locker room right now,” USC head coach Clay Helton said. “It’s something I know our kids wanted extremely badly, to win a championship, and we came up a play or two short today.”

For the second week in a row, USC came out of the gate with little life and quickly fell behind 14-0 thanks to two interceptions. Oregon needed just 36 total yards to score those two touchdowns and field position was tilted against USC for the entire first half. Six possessions in for each team, USC’s average starting field position was its own 14-yard line, while Oregon averaged the USC 45-yard line.

It looked like it would be a long night for the Trojans, as quarterback Kedon Slovis began his night 1-of-6 for eight yards, two interceptions and a sack taken. But the Trojans bounced back as they’ve done all season, eventually cutting the Oregon lead to 31-24 and getting the ball back with 4:43 left in the game.

“We were fighting for one more possession and we got it with 4:30 left,” Helton said. “It was right where we’ve known to be.”

But as Slovis attempted to throw the ball away, it wound up in the hands of Oregon’s Jamal Hill, who brought it in along the sideline. The play was initially ruled incomplete, but overturned by replay.

“We were in position even with mistakes we made in ballgame, especially the turnovers,” Helton said. “Only for kids heart, toughness and willingness to fight back that we put ourselves in position to go tie the ballgame.”

Oregon gained just 243 yards of offense on the night, as quarterback Tyler Shough completed just 8-of-15 passes for 91 yards, two touchdowns and an interception. But the Ducks were able to do just enough all night after taking that early 14-point lead. And USC was simply never able to completely get out of its own way.

“The fact of the matter is, we had those self-inflicted wounds with turnovers and penalties,” Helton said. “It’s something we have to learn from and in championship games, that can cost you the championship, and it did tonight.”

Playing without running back Vavae Malepeai, who ran for 110 yards last week against UCLA, the Trojans could never establish a running game to take pressure off of Slovis. Stephen Carr and Markese Stepp combined to run for 65 yards, but neither had a run of more than eight yards in the game. Slovis was harassed all night, as Oregon landed three sacks — all on third downs — and had him scrambling several other times. Slovis finished the game just 28-for-52, for 320 yards and two touchdowns against the three interceptions.

It felt at times as though Oregon’s freshness, having come off a bye week and preparing for USC for the past two weeks, was evident against a USC team playing its third game in 13 days and not knowing Oregon would be the opponent until Monday afternoon.

USC got itself on the board when Slovis found wide receiver Amon-Ra St. Brown for a 47-yard touchdown late in the first quarter. St. Brown finished with five catches for 74 yards, but suffered an injury late in the game.

Drake London was again terrific, finishing with eight catches for 75 yards, and Bru McCoy stepped up with six receptions for 76 yards and a touchdown — a performance that included two fourth-down receptions on USC’s final scoring drive.

Perhaps the long sequence of events that sums up the game best came in the third quarter, when Oregon marched 83 yards for a touchdown to push the lead to 28-14. It was a “what-if” drive for the USC defense, as the Trojans were flagged for unnecessary roughness early on the drive, following a play that would have set up a third-and-long situation. Later, Raymond Scott came in free on the Oregon quarterback, but Shough was just able to wiggle free and pick up yards. And then the Oregon touchdown came just one play after USC safety Talanoa Hufanga seemed to get both hands — as least fingertips of his hands — on a deflected pass in the endzone but just couldn’t quite bring it in.

USC was flagged for a penalty on the ensuing kickoff, but was able to get things going on the drive to set up a 2nd-and-goal from the 4-yard line. But the offense sputtered with two incompletions and the field goal made it 28-17 Oregon.

A beautifully-executed onside kick gave USC the ball back, but the offense again stalled and had to punt it back to Oregon. For the first time this season, the Trojans just couldn’t quite do enough to overcome their shortcomings.

“This time around, we didn’t get it done,” Helton said. “No excuses.”

Helton did say he feels this team laid the groundwork for future championships at USC, and that winning a conference championship has to be the next step.

USC was able to get its hands on the ball one final time after the Slovis interception, but a holding call on the punt return with just 23 seconds left put the Trojans too far back to get a realistic look at a tying touchdown.

USC’s defensive effort should be commended, as they played with their backs to the wall for much of the first half. No Oregon player had more than 55 yards of offense, but four difference receiver caught touchdown passes, as the Ducks managed to consistently punctuate drives with touchdowns when they got close.

Linebacker Kana’i Mauga led the defense with 14 tackles, while Hufanga was outstanding again, with 12 tackles and two sacks. But even the star safety wasn’t immune to mistakes, as a roughing the punter call kept an Oregon drive alive and eventually turned into a field goal partway through the fourth quarter.