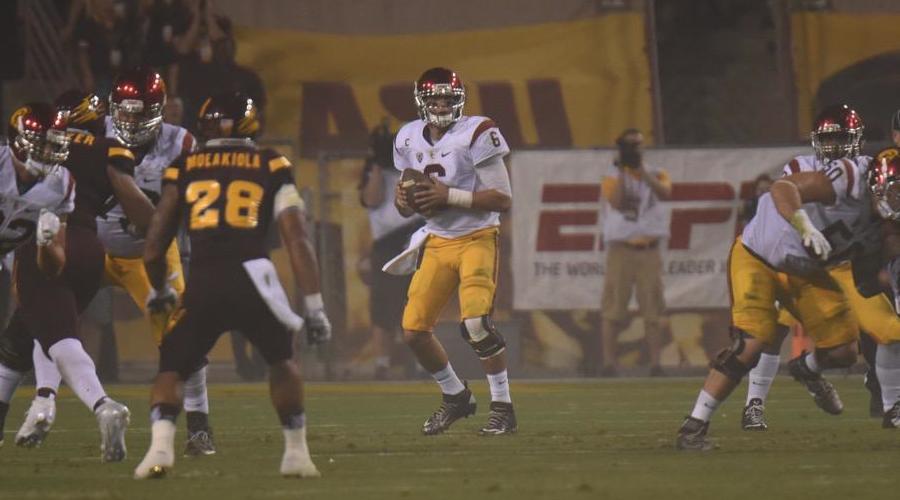 One week after suffering a disappointing loss to Stanford, USC responded in a big way on Saturday night by taking down Pac-12 South foe Arizona State 42-14 in Tempe (Ariz.).

After quarterback Cody Kessler threw his first interception of the season deep in Sun Devils territory on USC’s opening drive, the Trojans quickly seized control and ran away with the game, converting four first-half Arizona State turnovers into touchdowns.

Kessler started USC’s scoring run on the Trojans’ second drive of the game by hitting Adoree’ Jackson for an 80-yard touchdown, before hooking up with Steven Mitchell Jr. and JuJu Smith-Schuster (5 catches for 103 yards) for passing touchdowns to take a 21-0 lead late in the second quarter.

Things went from bad to worse for Arizona State when, with the Sun Devils driving at the USC goal line with under a minute left in the half, Delvon Simmons forced a Mike Bercovici fumble, with Chris Hawkins picking the ball up and returning it 94 yards for a touchdown.

Then, on the ensuing drive Quinton Powell forced ASU return man Gump Hayes to fumble the ball, with Soma Vainuku making the recovery for the Trojans. Kessler followed that up by hitting Smith-Schuster again for a 10-yard touchdown strike, and the Trojans led 35-0 at halftime.

Not everything went completely USC’s way throughout the night. The Trojans did allow two touchdowns in what was a sloppy second half at times, and they had their struggles both in rushing the ball, as well as in defending against the run, with the Sun Devils out-gaining USC on the ground 182-76.

Still, Arizona State never posed a serious threat to USC in this one, and Steve Sarkisian and Co. have to feel good about coming away with a decisive victory on the road at a crucial time.

Kessler finished 19 of 33 passing for 375 yards and five touchdowns with one interception, with his final scoring toss going to Isaac Whitney in the fourth quarter.

Jackson, meanwhile, was the most electrifying player on the field, catching a total of three passes for 131 yards, while also making his presence felt on defense and special teams, coming up with a highlight-reel 45-yard punt return.

Bercovici, who threw for over 500 yards and five touchdowns against USC a year ago, completed 23 of 44 passes for 272 yards with no touchdowns and one interception.

The Trojans improve to 3-1 heading into the bye-week, with Washington coming up at home on Oct. 8.