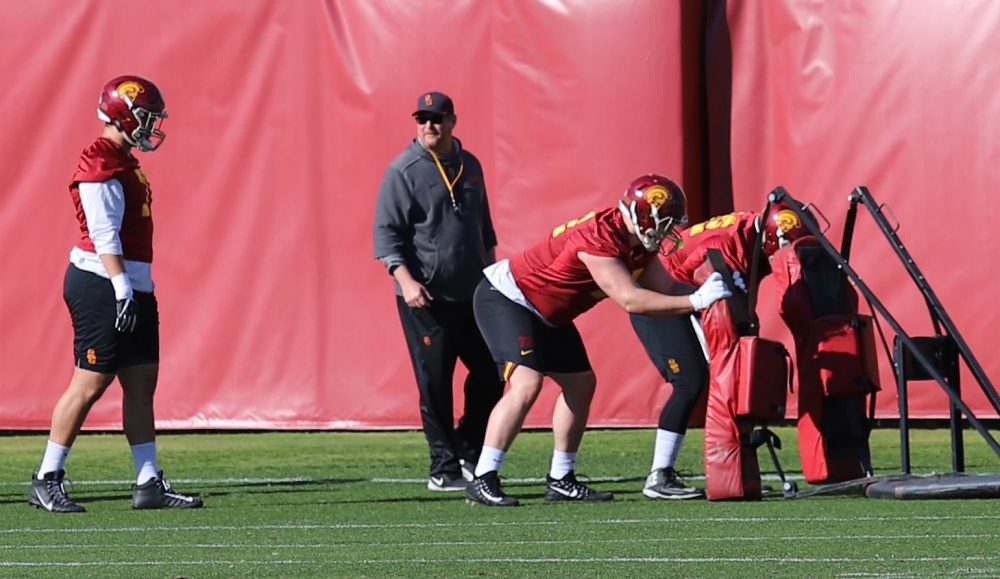 This past Saturday was supposed to be the final practice of spring ball for the USC Trojans. And with that was supposed to come a fairly good understanding of how USC’s offensive line would shake out heading into the 2020 season.

USC entered spring ball needing to find new starters at two positions, as right tackle Drew Richmond had exhausted his eligibility and left tackle Austin Jackson declared early for the NFL Draft. But after the one and only practice of spring ball, it became evident that offensive line coach Tim Drevno was looking for more than that.

Linchpin left guard Alijah Vera-Tucker took first-team reps at left tackle, as the first man up to replace Jackson there. In Vera-Tucker’s place, backup center Justin Dedich was with the first team at left guard. USC was working without the services of last season’s starting right guard Jalen McKenzie, who was taking care of academic responsibilities, so the right side of the line featured redshirt freshman Jason Rodriguez at right tackle and former defensive lineman Liam Jimmons at right guard, where he saw action in nine game with two starts.

Spring ball is a time when you can tinker with lineup changes and position shifts, as well as watch young players grow. That would have been extremely important for a USC line that might be the only question mark for the Trojans’ offense.

“I was looking forward to spring ball and the development of these guys,” Drevno said of his group. “To see a guy like Liam Jimmons. He has a chance to be a really good player and he was going to get more reps at the offensive guard position.”

Drevno mentioned Liam Douglass, Justin Dedich and Jason Rodriguez as other players who would have been able to take steps forward with additional reps, development, gaining better communication abilities and an opening of their football awareness that spring ball can often bring.

But as quickly as it started, spring ball was shut down due to concerns about the spread of the coronavirus. Drevno had to act on two fronts, as he worked to look after his own players, as well as take care of his family, which meant bringing home a daughter from Miami of Ohio and a son from Vanderbilt. He also has a daughter in high school.

Drevno had a little time to prepare, as his son is a longsnapper for the Commodores’ football team, and Vanderbilt shut down their spring ball four days before USC made its own announcement. When it came time for USC to act, head coach Clay Helton was able to address the players at a team meeting. Drevno was also able to speak to his position group before they went home for what has now been more than a month.

Drevno was able to send his players off with some final guidance, including drills they could work on, and he was upbeat about things working out through uncertain times. He said he could tell during that first week of social distancing, where things went exclusively to online meetings, that his players weren’t quite settled in.

“I think the first week there was a transition,” Drevno said of his virtual meetings. “You could see it in their eyes…You could kind of see they were trying to get their biorhythm and their regimen in place.”

Student-athletes have been so conditioned to follow a schedule that just about completely fills days down to the minute. Now, there were plenty of unknowns that needed to be dealt with. From classes to tutoring sessions to discussions with the academic center, players and coaches had plenty on their plate to figure out outside of football.

“I said, ‘Hey, listen,'” Drevno said of addressing his group early on during the transition. “‘I don’t know when we’re going to come back, but all you can control is today. Let’s get better today and just worry about today.'”

Players received workout programs from the strength and conditioning coaches and various ideas about drills to keep them sharp from Drevno.

It didn’t take long for players to find their rhythm, while Drevno found his as well. He said he had his share of fights with the Zoom video conference set up early on, as it makes it difficult to make true eye contact with players as you are progressing through meetings and film study.

“I kept asking if they could hear me and trying to yell to make sure they got my point. I was talking really loud in the house,” Drevno said. “My daughter and son were trying to take online classes, so now my office is in the garage.”

Drevno put up a few photos in his makeshift office to give his video background a bit of life, but it pales in comparison to what other players have done. Drevno said AJ Mageo uses a background photo to make it seem like he’s sitting inside the dorm. Another player uses a photo of the team meeting room as his background. And Mark Zuvich found a photo of Drevno in his old Cal State Fullerton football uniform.

Drevno finds ways to keep things light on his side as well. He knows the players are anxious for him to log off after the meeting so they can stay on and chat, so he’s played on that.

“They want dad to leave the room so they can stay on there and talk, so I’ll hang on for a couple extra seconds just to mess with them,” Drevno said. “I’ll keep saying, ‘Oh, just one last thing I want to say…'”

Sticking with Drevno’s theme of worrying about today and controlling what he can control, everything this spring has been done in an effort to prep for a 2020 football season, under the rules and restrictions currently in place. Drevno got just one day of non-padded practice with a position group looking for starters at multiple spots. It’s also the position where social distancing was the exact opposite goal of the spring, as players working at new positions needed to be closer than ever with the guy lining up next to him.

The biggest thing for Drevno moving forward is that he hopes whenever players are able to be back on the field, the NCAA allows for some kind of extended fall camp or the ability to utilize some football equipment during summer conditioning sessions that would typically be held without anything like sleds, medicine balls, tackling dummies or other football related tools. Drevno said he’s hoping for a model similar to the one the NFL uses with OTAs.

Drevno said working on things like combination blocks and striking the shields will be important to do as soon as there can be a return to practice, in order to pick up what the players missed during the spring. But ultimately, he sees his group being able to overcome this obstacle.

“It’s a formed habit, striking people,” Drevno said. “Athleticism is going to win out and that stuff is going to come back. It’s like riding a bike.”

Looking ahead to this fall, it’s tough to imagine a position getting stronger after losing a potential first-round NFL draft pick, but that might be the case at left tackle, where Vera-Tucker could blossom into a first-round pick himself if he does make that move a permanent one.

“It’s getting that pass set with a wide rusher, a guy off your body,” Drevno said of what Vera-Tucker would need to work on going from guard to tackle. “Getting in a groove with that kick. He’s extremely athletic and does some things naturally. He just knows how to do it, but he’s learning the techniques of tackle – the position, footwork, hand placement – it’s different with guard. At tackle you’re kind of by yourself on an island and it’s mano a mano, so you have to get a feel for that.”

Of course, the added benefit for Vera-Tucker if that move goes through is that it makes him that much more valuable as a pro prospect. While Vera-Tucker would have eligibility remaining for the 2021 season, it’s more than likely a strong 2020 showing would push him to leave early, especially after he already explored that option this past offseason and he’s on track to earn his degree this December.

The other potential position switch, in Dedich, is similarly not much of a worry for Drevno.

“He’s a tough, hard-nosed football player,” Drevno said of Dedich. “Wherever you put him, he will survive.”

And no matter which five linemen are thrown out as starters, there should be some familiar faces anywhere you look, as many linemen not only now have playing experience, but also have experience playing in this offensive system. It was a new one for Drevno, but he said he’s seen enough.

“Something about this offense where I think I’m completely sold on it is the simplicity of it,” Drevno said of Graham Harrell’s USC Air Raid. “I’ve been in offenses before where they’re so much scheme and the book is so think, you have to teach so much of the adjustments for everything and you’re always trying to catch up on that. One thing about this offense is that I get to spend more time getting to know my players and I’m not so bogged down thinking about the next thing I have to teach. The relationship between coach and player can grow, and I can better learn how to motivate them, I can spend time talking to them and I can become a father figure in their life.”

Drevno was quick to point out that the other benefits of the simpler offense is that it allows him more time to recruit and that players can spend more time becoming great technicians, which helps in this offense and with their future NFL prospects.

While none of these college coaches or players have any experience going through anything like this before, Drevno might have a bit of an advantage when it comes to preparing his position group or at least giving them a mental edge. Drevno was with the San Francisco 49ers during the 2011 season, when a lockout stopped the NFL from March 12 through July 25. During that, players could have no communication with the coaching staff or access to team facilities.

“We finally got them in training camp and that year we went to the NFC Championship Game,” Drevno said. “There are things you’re going to miss, but I think we’ll be okay. We’re going to be fine through this. We have a bunch of good guys. It’s a temporary setback and we’re going to come back stronger than ever out of this thing.”