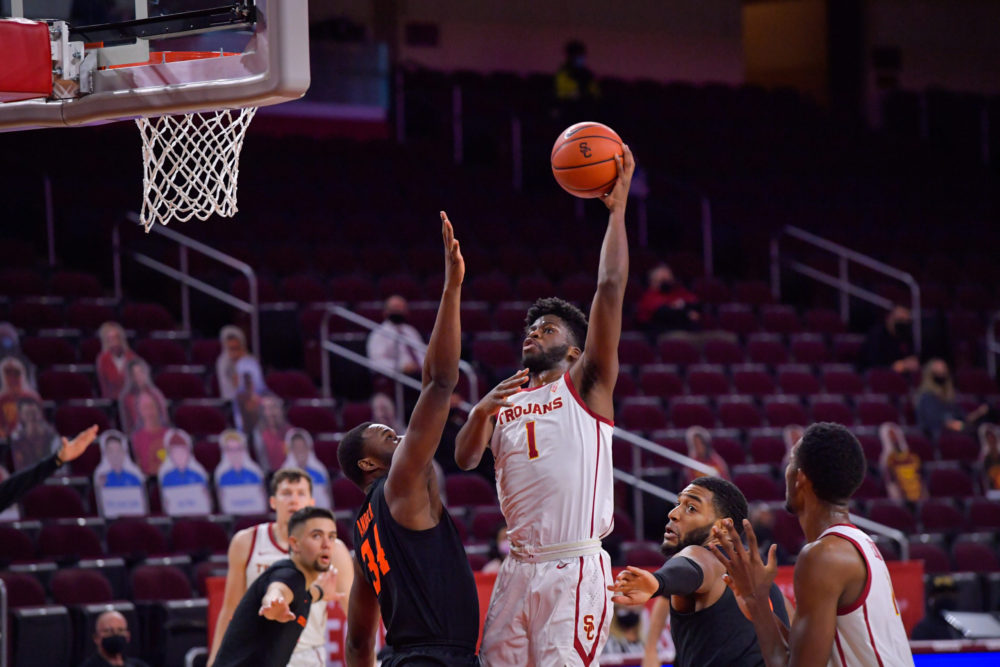 USC beat Oregon State on Thursday 75-62 to remove some of the sting over last week’s loss in Corvallis. The Trojans are now 13-3 and 7-2 in league play.

Both teams struggled to score in the first half. Ethan Anderson suggested that the unusual early start time may have impacted both offenses. The Trojans led at the break 30-27 as a result of dominating the boards including 15 offensive rebounds. In the first half the Trojans shot a very poor 13-39 from the field and 3-14 from three. With all of the rebounds on the offensive end USC only scored 10 second chance points. Fortunately the Trojan defense played well the entire game. OSU had twelve less shots and made 10-27 (37%) in the first half and only 3-11 from three.

The last OSU lead was 27-25 with a minute left in the first half and the biggest USC lead was 16 with just under 5 1/2 minutes left.

The Trojans Did A Lot Of Things Well In This Game

USC finished with 21 offensive rebounds and the Trojan bench outscored the OSU bench 31-10. Enfield said that the Trojans played with a lot of energy and “the bench was huge.” The Trojans also had a big 38-18 margin in points in the paint.

On the defensive end the Beavers’ surprise star from last week, 7’1” Roman Silva, was a complete non factor. He made 1-2 shots in 10 minutes. Only two Beavers were productive in the rematch. Star point guard Ethan Thompson started slowly with only 4 first half points but had a big second half to keep the Beavers n the game and finished with 20 points on 7-16 from the floor. Jarod Lucas contributed 18 points making 6-11 including several threes, but the rest of the Beavs made only 9 shots.

Enfield loved the defensive intensity. Ethan Anderson acknowledged that “cold streaks are bound to happen with so many new players. We are still working on rhythm” and added that the defense has been very good and helped win games. Enfield said that the Trojans switched defenses at times, playing some zone and employing a full court press for a several minute stretch. They had planned to mix up their defenses to keep OSU off balance.

This Was A Team Win

None of the Trojans had a big game statistically. Evan Mobley made 6-12 shots, though his first four makes were all dunks. He finished a team high 14 points and 13 rebounds, five on the offensive end. He also had 3 assists, 3 turnovers and 3 blocks.

Isaiah White had a quiet 11 points along with 5 boards, three on the offensive glass. He made 4-7 shots including his only three point attempt and sunk both of his free throws.

One of the big bench contributors was Chevez Goodwin. In 19 minutes he made 4-6 shots and grabbed 10 rebounds, five at each end.  He missed all three of his free throws; his poor shooting from the foul line will likely keep him on the bench at the end of close games. For several minutes Enfield surrounded Chevez with four shooters to match the Beavers when they played a smaller lineup.

Ethan Anderson continued to come off the bench. He only played 17 minutes due to foul trouble, but Enfield likes his “steading hand on offense.” After not scoring in the first half Ethan finished with 10 points on 3-7 from the floor including 2-4 from three and 2-2 from the line. Ethan said the the Trojans “increased the pace in the second half.”  He acknowledged that it is different coming off the bench and said when he comes in he likes to get an assist or a shot in the paint to get himself going. Ethan has taken on the challenge of playing off the bench and he “wants to be a playmaker to get people the ball in the correct spot.”

Isaiah Mobley started very quickly and it looked like he might have a big game, but after a couple of early baskets and rebounds he was relatively quiet. He finished with 9 points, making 4 of his 8 shots and adding 5 boards.

Noah Baumann had a very good game off the bench. He has been struggling with his shot in recent games but against OSU he made his first two threes and a shot in the lane for a quick 8 points when the team was struggling in the first half. He finished with 11 points in 24 minutes on 3-6 from three and 4-8 overall. He also played well on defense. Noah said “I am trying to get my swagger back over the last month. My teammates and coaches tell me that they believe in me… I have more to offer than a typical white dude shooting from the corner… I believe I can better create for others and defend.

OSU tried a zone and zone press late to get back into the game, but the defensive changes had only a minimal impact on the Trojans.

Drew played 23 minutes and scored only 3 points. He missed his first six shots, four from beyond the arc, before making his final shot from three. He added 5 rebounds and 3 assists and turnovers.

“He missed his first four 3-point shots which were wide open,” Enfield said. “He is missing layups and wide open threes. I talked to him after the game and tried to pump him up. He needs to play with confidence. In three straight games he has struggled on offense.”

Noah added that he “tells Drew to keep shooting. I believe in you.”

Drew is a big part of this Trojan team. It will make a huge impact if he can shake his shooting slump and cut down his turnovers. He is one of the best shooters and all around players on the team.

Several conferences are discussing the possibility of cancelling their conference tournaments to help ensure teams are healthy for the NCAA Tournament.

“We would like to compete for the Pac-12 Tournament title,” Enfield said. “We didn’t get the chance last year.”

He added that he favors all twelve teams participating. He thinks teams can be isolated a few days before they travel to Las Vegas and go into bubbles once they arrive.

His suggestions mirror how teams will handle health issues leading up to and in the NCAA Tournament.  Enfield gave the impression that he thought last year’s team would have made a post season run and that this one will too.

The week 8 winner is Noah Baumann. At one point it appeared the Trojans might play three games this week. Once Stanford decided against playing the Trojans on Monday, two games were still on tap. Oregon shut down its basketball activities early this week and the only game played was against the Beavers.

For the first time a non starter is the player of the week. No one had a huge statistical game, but Noah made three big shots which kept the Trojans in the game in the first half. His two quick threes and a pull up jumper gave the Trojans 8 badly needed first half points when no one else was scoring.  For the game he made three of USC’s eight three pointers and grabbed two rebounds. Without his first half production the Trojans would have had a significant deficit to overcome in the second half and they might not have won without him.

The Trojans have not been as good or consistent on the offensive end lately. Ethan’s return to form will be a big benefit. A huge factor going forward is how well Drew plays. Before the last three games he had played very well in all phases and was a key to the Trojans’ success. The toughest part of the conference schedule starts next week; if Drew can return to form it will add a lot on the offensive end.

The games next week at Stanford and at home against UCLA will be big and begin the Trojans’ stretch run. There have been a few encouraging signs of late. Evan has played with much more aggression in the last two games and is making his foul shots. Having Ethan back helps the Trojans on offense and gives them a good perimeter defender. Chavez, Isaiah Mobley and Isaiah White are all playing with passion and energy. If this game is a sign that Noah has broken out of his slump it is a big addition offensively. And Tahj has been a consistent scorer for the Trojans all season. USC will need good games from most of the core to have a chance to win several of the remaining games.

USC has two games left against UCLA and Stanford, one home game against Arizona and ASU, and a road game at Colorado. The Trojans have played themselves into contention and will now face the heart of the schedule.