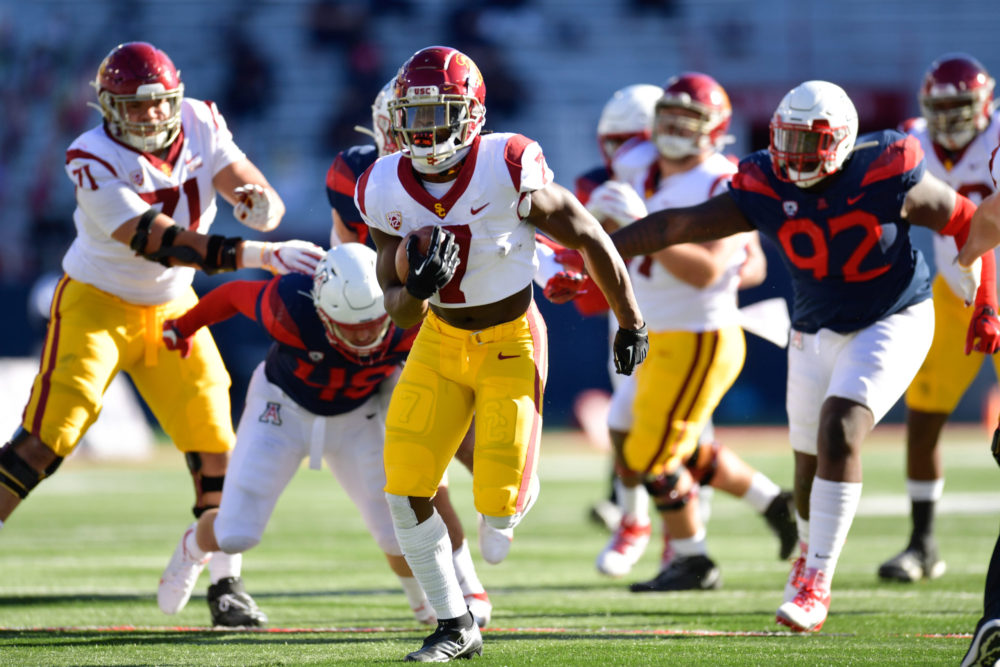 For the second time this season, USC turned a deflected ball into a last-minute win, as the Trojans escaped with a 34-30 win against the Arizona Wildcats and move to 2-0 on the season.

Down by three with 1:35 remaining, USC put together a 75-yard drive with the biggest play coming when Kedon Slovis floated a pass that went in and out of the hands of Arizona cornerback Christian Roland-Wallace before settling into the arms of Amon-Ra St. Brown for a 19-yard gain. USC running back Vavae Malepeai took the next snap into the endzone for an 8-yard touchdown, giving the Trojans a 34-30 lead that they would hold onto. Last week, a batted ball in the endzone led to a Bru McCoy touchdown against Arizona State, and a batted onside kick attempt helped USC gain a final possession that led to a game-winning score.

“Looking at our football team, we, offensively, showed up late again,
Helton said. “We missed some opportunities in the red zone that I thought could separate ourselves. Coming away with no points wasn’t good and left a good team in it.”

Helton said that when it mattered most, he didn’t see any panic from his team.

USC was supposed to clean up the issues that plagued them last week in a close season-opening win. Instead, the Trojans were even sloppier this week.

USC allowed Arizona to put together a 8-play, 65-yard drive to score the go-ahead touchdown with 1:35 remaining in the game. And the Trojans helped plenty on that drive, as they did all game, sending the kickoff out of bounds and committing a facemask penalty that negated a sack. One week after turning the ball over four times, the Trojans were clean in that category, but committed 11 penalties for 110 yards and once again couldn’t find a rhythm on offense until the final two drives of the game.

The final stats look okay, as USC finished with 498 offensive yards, averaged 5.4 yards per rush on the way to 173 rushing yards and Slovis threw for 325 yards and a score. But this was not an impressive win and USC was pushed to the final whistle by an Arizona team that lost its starting quarterback and running back and five of its top six tacklers from last season, and was playing its first game of the 2020 season.

No series of plays better encapsulates USC’s overall play against Arizona than when USC faced a second-and-goal at the Arizona five-yard line late in the third quarter. Running back Markese Stepp carried the ball and dove for the goal line, but was marked short. It was questionable as to whether Stepp might have actually crossed the goal line, but USC hurried to the line to get another snap off but committed a false start. Pushed back five yards, USC then let the play clock expire and was pushed five yards further back. The Trojans then threw incomplete on third down and finally wound up missing a 28-yard field goal.

USC missed two red zone opportunities, as another fourth-and-short run play was stopped by a defender coming in untouched — a near copy of what happened against Arizona State last week. And the Trojans converted just five of 13 third-down opportunities.

Defensively, USC had few answers for Arizona quarterback Grant Gunnell at times, as he completed 24-of-36 passes for 286 yards and three touchdowns against one interception. The Wildcats also found success on the ground, at running back Gary Brightwell rushed 21 times for 112 yards and Gunnell added 40 yards of his own.

USC played for long stretches without safety Talanoa Hufanga, linebacker Palaie Gaoteote and outside linebacker Drake Jackson. The defense was led by Marlon Tuipulotu once again, who finished with eight tackles. And Jackson’s return for the second half was huge, as he had two huge sacks, including one that ended an Arizona drive in the third quarter and one that effectively ended the game on Arizona’s final possession of the game. Helton said Hufanga was dealing with a deep thigh bruise.

One of the big questions facing USC right now is Slovis and his throwing mechanics. He finished by connecting on his final 12 throws of the game and overall, the numbers look good. But over the last two weeks he’s produced a number of passes that have fluttered out of his hand.

USC got off to an extremely strong start against Arizona, as Hufanga collected an interception to stop the first Wildcat drive. The Trojans then capitalized with a short one-yard touchdown run by Markese Stepp. But any thought of a USC blowout was short-lived, as Arizona scored on a 34-yard pass from Gunnell to wide receiver Jamarye Joiner and no team ever led by more than seven points.

USC led 10-7 and then 17-10. The fourth quarter saw four lead changes, as Arizona kicked a field goal to go up 23-20 with 7:49 remaining. Slovis found tight end Erik Krommenhoek for a 6-yard score with 3:30 remaining to put USC up 27-23. The teams then traded touchdown drives over the final three minutes until USC was able to hold firm defensively on Arizona’s final last-gasp drive.

Offensively, St. Brown finished with seven receptions for 113 yards and Vaughns had seven receptions for 70 yards. Stepp led the Trojans on the ground with 82 yards, while Carr had 81 yards. Malepeai had just seven yards on six carries, but his 8-yard run proved to be one of the biggest carries of the game.