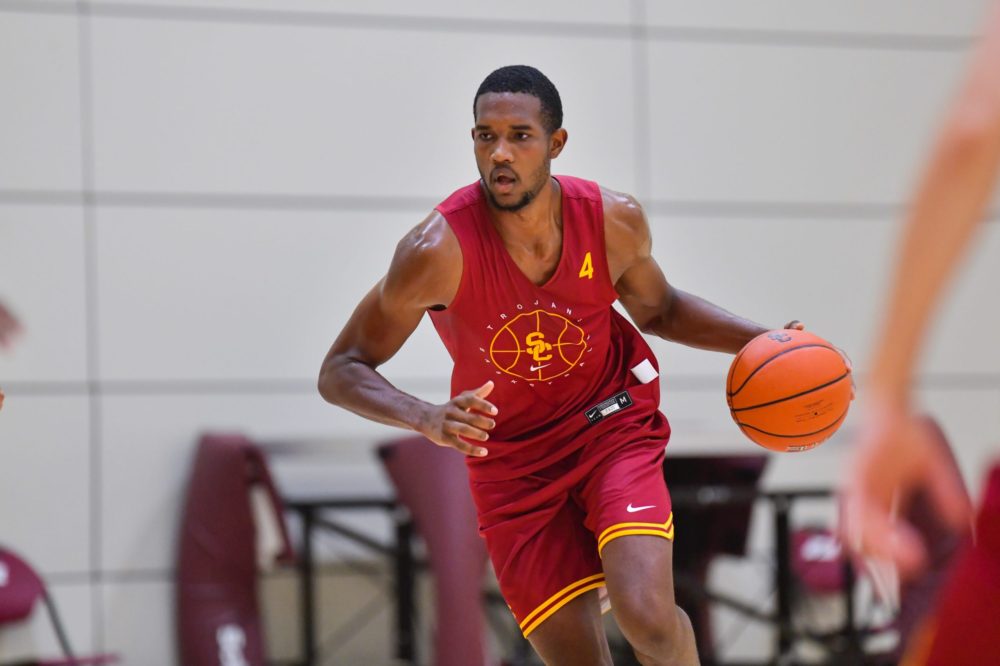 The Trojans and the rest of college basketball will begin play four weeks from today. The Trojans have announced that they will play at home on November 25, but the opponent has not yet been publicly released. The first official practice was October 14; the team was not allowed by LA County health officials to begin to work inside until twelve days earlier.

Some amount of clarity has emerged about this year’s team and the coaches hope to learn much more over the next four weeks as many questions remain.

Several Players Have Demonstrated That They Are Ready For Big Seasons

Players with last names beginning with “M” have starred for the Trojans over the years including Harold Miner, OJ Mayo, Jordan McLaughlin, Chimezie Metu, and Jonah Mathews. This season Evan Mobley will add his name to the list. Evan was recently named a pre season third team All American.  Coach Andy Enfield has raved about Evan in some of the same ways he described Onyeka Okongwu during pre season practice last fall.  Enfield also added that Evan has the ability to score from many more places on the floor, will potentially block and impact more shoots because of his greater length, and is a better passer than Big O. Evan Is not as big and physical as Onyeka and will likely struggle more in post and position defense against big physical players.

Enfield has expressed a lot of enthusiasm for the play and effort of grad transfer Isaiah White, adding that Trojan fans will love watching White play. The coach is also pleased with the improvement of returning sophomores Isaiah Mobley and Ethan Anderson. Their level of play will have a big impact on the team’s success.

The coach said that this will be a good defensive team and that the offense is still a work in process.

Questions Remain About The Roster

Similar to last year the Trojans return only three players and a fourth who has practiced with the team but did not play last year. Last season seniors Jonah Mathews and Nick Rakocevic returned along with sophomore Elijah Weaver who played big minutes as a freshman. Charles O’Bannon also returned but he had barely played in his prior two years and he left at mid season without making any contribution.

This year the Trojans return three sophomores in Ethan Anderson, Isaiah Mobley and Max Agbonkpolo. Ethan was the starting point guard last year and Isaiah was the first big man off the bench. Max played only limited minutes. USC also brings back guard Noah Baumann who practiced with the team but sat out last season after transferring from San Jose State. Last year the Trojans relied a lot on the three experienced returnees, and they will be forced to rely this year on the three sophomores. The lack of experience in Enfield’s system and the inability to get together and bond over the summer will put the Trojans at a disadvantage against experienced teams early in the season.

The Trojans have only nine scholarship players eligible to play. Injuries or foul trouble will significantly impact this team more than last year. Late last season the Trojans swept the Washington schools at home when Onyeka was in concussion protocol. If Evan or Ethan miss games or are on the bench for long stretches the Trojans will likely struggle. In last Friday’s media call Enfield said that there could be more clarity this week about whether transfer Drew Peterson would play or redshirt this season. Drew would add another quality player at guard and give the Trojans another ball handler.

It’s still not clear whether the Trojans have enough backcourt athleticism and quickness to match up against teams with quality guards. As a team the Trojans are very big but are not very quick on the perimeter. Ethan and grad transfer Tajh Eaddy are the only guards with good quickness. Ethan has the potential to become a very good perimeter defender. If opponents play three guard lineups the Trojans will counter with Ethan, Tajh and Noah Baumann or use Max Agbonkpolo or Isaiah White to defend a guard. Since USC’s biggest strength is the size and skill of its front court players the Trojans won’t play small unless forced to matchup with an opponent.

Noah, Max and Isaiah White will likely have a size advantage against most guards, but they might struggle defensively. Max is athletic and has played defense against smaller guards but doesn’t have quick enough lateral movement to defend elite guards. On the other hand, he is six foot nine and may be the perfect size to defend UCLA’s best player, six foot nine guard Chris Anderson. Enfield has said Isaiah White has a very quick first step with the ball on offense and he is listed as a six foot seven guard/ forward. Without seeing him play against smaller guards we don’t know if he is quick enough to defend PAC 12 quality guards or whether he has the same quick first step on defense. Noah is the least athletic player on the team and might struggle defensively against quicker guards.

Will The Trojans Have Enough Perimeter Scoring?

Unless the Trojans can shoot effectively outside 15 feet, defenses will pack inside to try to limit the Mobley brothers and grad transfer Chevez Goodwin. Goodwin made 64% of his shots last season at Wofford but rarely strayed far from the basket to score. Both Mobleys can score from outside, and if either shoots a good percentage it will help open up the court. None of the transfers with the exception of Drew Peterson are proven scorers at the major Division 1 level; the three grad transfers must prove that they can play and score at this level. Only recently has there been talk of Drew seeking a waiver to play this season.

Ethan was inconsistent last season from the perimeter. Tajh Eaddy’s offensive numbers last year dropped  off from his sophomore season, though his scoring increased substantially and his shooting percentage also went up when he was inserted into the starting lineup mid season at Santa Clara. The Trojans will need both guards to score from downtown more consistently.

Noah is a very good catch and shoot player and made a terrific 45% of his three point shots in two seasons at San Jose State, though he only averaged 10 points per game. He is not quick enough to create shots off the dribble. The Trojans will likely try to get him open threes in a variety of ways by running plays for him on inbound passes and fast breaks and by screening for him more than perhaps any player in the Enfield era.

The Trojans will also need perimeter scoring from their big men. Max may be a key player on the perimeter. He didn’t play enough minutes last year to get into any rhythm, but he was very good from three in high school. This season his three point shot will be needed. Both Mobleys have the ability to step out to 15 feet or more, but Isaiah White has not had success from three over his career.

Which Departing Player Will Be The Toughest To Replace?

USC lost eight players from last year’s team. Seniors Jonah Mathews and Nick Rakocevic graduated and grad transfers Daniel Utomi and Quinton Adlesh are gone. Onyeka Okongwu will be a high draft pick in next month’s NBA draft.  Elijah Weaver surprisingly transferred after the season and is now at Dayton. Charles O’Bannon transferred mid season to TCU and back up point guard Kyle Sturdivant transferred after the season to be closer to home after his father’s death and is now at Georgia Tech.

So which player will be the hardest to replace?  The best player was clearly Big O, but Evan Mobley will replace him and may exceed Onyeka’s overall production. What this year’s team lacks is anyone who can do all the things that Jonah Mathews contributed. Jonah was one of the best perimeter defenders in the Pac 12, led the team in three point shooting and made several clutch threes, was able to drive to the basket and finish or put the ball in the hands of an open teammate, and was the major ball handler during stretches and closing out some games. None of the players on this year’s team has this combination of skills.

This year the Trojans will have to rely on several players to replace parts of Jonah‘s game. Ethan will need to improve his scoring from downtown and become a better perimeter defender. Noah Baumann must make shots and some of the bigs will need to make threes. Isaiah White needs to have success when he takes the ball to the rim.

Everything would become much easier for the Trojans if Drew Peterson plays this year Drew can handle the ball and score from outside.  He has a quick first step and can take the ball inside to score or find open teammates; he led Rice in assists last season. He is not a big a three point threat but can make threes.  He is not a lockdown defender like a Jonah, but the Trojans will be a much better and deeper team if Drew plays.

A lot will change over the next four weeks. The staff is trying different combinations to find a starting lineup and determine rotations. There are legitimate expectations for a lot of growth and continued improvement before the November 25 opener.