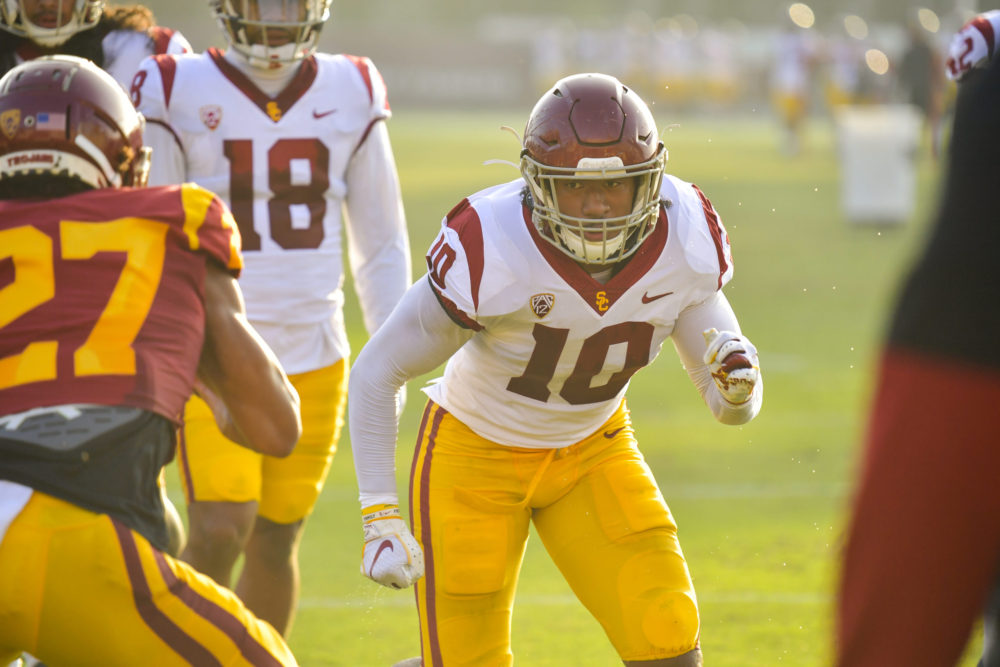 USC was without several key players for its game this past Sunday against Washington State. Starting left guard Andrew Vorhees and top offensive line backups Justin Dedich and Liam Douglass all missed the game due to isolation or contact tracing. The Trojans lost starting right guard Liam Jimmons to an elbow injury before halftime. And starting middle linebacker Ralen Goforth didn’t play because of a foot sprain he suffered against Utah two weeks before.

But USC is likely to welcome them all back this weekend for the rivalry game against UCLA.

Helton said Thursday morning that if USC’s Covid tests continue to return negative results, the Trojans should get all of the players who had been in quarantine back for Saturday’s game. He said he appreciated the medical plan in place to be able to turn four positive tests into a situation where USC was forced to cancel just one game and return to a full roster three weeks later. There have been programs shut down for weeks and without full rosters for much longer than that throughout college football this season.

There was some overall good news on the injury front as well.

Linebacker Ralen Goforth sat out the Washington State game due to an injury, but is on track to return against UCLA. Helton said Goforth has had a good week of practice. Goforth wasn’t missed much against the Cougars as USC had just one traditional linebacker on the field for a lot of the game, as safety Talanoa Hufanga dropped down a level. But against a run-heavy team like UCLA, getting Goforth back in the middle could be vital.

The good news continued for the offensive line as well, as Liam Jimmons should be able to return from an elbow injury. Jimmons initially injured the elbow last season and suffered a subluxation of that same elbow in the first half against Washington State. Helton said the injury hasn’t turned out to be as significant as they originally thought. Jimmons has practiced the last two days.

Having the complete offensive line in place is huge news for USC, as the group struggled against Washington State while playing mostly with two true freshmen at the guard positions and with three other starters who hadn’t practiced all season.

There should be a fire lit under these starters coming into the game against a UCLA team that has been pretty good against the run and very good at getting to the quarterback and piling up tackles for loss this season.

In other injury news, USC will be without cornerback Dorian Hewett this weekend, as he is in concussion protocol.

Helton also said that surgeries for safety Greg Johnson (knee) and tight end Jude Wolfe (foot) went well. He doesn’t see them being long-term issues and expects both back next fall.