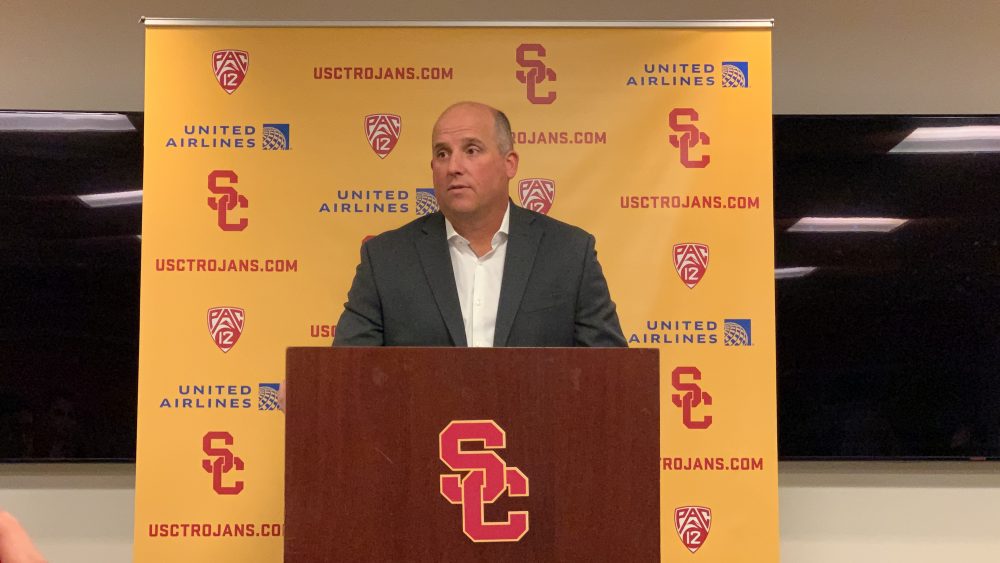 While USC’s 2020 recruiting class isn’t officially finished, the Trojans announced 11 players who signed on the first day of the early signing period. The Trojans will have the ability to add more players at a later date, as several USC targets are scheduled to announce their commitments during the January All-Star games, and USC is also chasing players who won’t commit or sign until February’s regular signing period.

Overall, today was not the signing day to which USC fans have become accustomed. USC had limited scholarships to hand out, so the 11 signees were four fewer than the next-smallest Pac-12 class and just half of what Washington and Oregon signed, as the Huskies and Ducks checked in with the Nos. 1 and 2 classes in the conference. But at the end of the day, USC finished with the lowest-ranked class in the Pac-12, which is simply unheard of for any Trojan recruiting class. USC finished with one four-star prospect, as six Pac-12 programs (including Cal and UCLA) signed at least two.

Of the top 25 prospects in California, USC did not sign a single one. Oregon signed four. Georgia grabbed two of the top six. Washington signed three of the top 18. And the biggest blow came when the Trojans couldn’t close the deal for five-star linebacker Justin Flowe (Upland, Calif./Upland), who signed with the Ducks.

While watching local elite prospects sign with other programs was a big letdown for many USC recruiting fans. For USC and head coach Clay Helton, Wednesday’s class was about big men.

“It’s always great to welcome some newcomers to USC,” Helton said. “For us, as you can tell, it was a big man’s day.”

Helton said that without a lot of attrition from the roster — just seven scholarship seniors will be removed from the roster for next season — they knew this would be a smaller class going into it.

“To acquire the six offensive linemen that we did on the front, as well as the three defensive linemen–two interior linemen–was exactly what we were looking for,” Helton said.

Offensive lineman Jonah Monheim (Moorpark, Calif./Moorpark) was the only four-star prospect USC signed on Wednesday. But Helton went to bat for his staff’s evaluation process.

“To be able to have what we acquired with such a limited number, I’m very satisfied with what we needed,” Helton said. “At the end of the day, I’m not necessarily about perception, I’m about wins and how to produce the best football team. And so you have to maybe not worry about popular opinion, and get exactly what your needs are as a team.”

Helton said there could be additional prospects added to this class in the coming months. Wide receiver Gary Bryant (Corona, Calif./Centennial) could be one of those additions and would immediately become the highest-ranked player in this class, as the nation’s No. 57 overall prospect. Cornerback Dwight McGlothern (Spring, Texas/Klein Oak) is another four-star USC target who plans to announce his commitment in early January.

Of the Wednesday signees, Jackson, Lewis and Pepe will join the team this spring as early enrollees.

Here is a look at the USC signees announced on Wednesday:

DL Kobe Pepe—He made 2019 PrepStar All-American as a senior defensive tackle at St. John Bosco High in Bellflower (Calif.).  He had 74 tackles, including 12.5 for losses (with 11 sacks), 5 deflections and a forced fumble in 2019.  St. John Bosco won the 2019 CIF Division 1 and California State Open championships.  As a junior in 2018, he made Cal-Hi Sports Junior All-State honorable mention while getting 68 tackles, including 5 for losses (with a sack), plus a deflection and a forced fumble.  He had 19 tackles and 2 deflections as a 2017 sophomore.

OT Casey Collier—He made 2019 PrepStar All-Central Region as a senior offensive tackle at Barbers Hill High in Mont Belvieu (Tex.).  As a 2018 junior, he allowed just 2 sacks.  He also played basketball at Barbers Hill.  His sister, Charli, is a sophomore center on the Texas women’s basketball team.

OT Andres Dewerk—He made 2019 PrepStar All-Western Region as a senior offensive and defensive lineman at Los Gatos (Calif.) High.  He had 17 tackles and 2 deflections in 2019.  Los Gatos won the 2019 CIF Central Coast Division II championship.  As a 2018 junior, he had 4 tackles.  He had 22 tackles, with 1 for a loss, and blocked a field goal as a 2017 sophomore.

OT Courtland Ford—He made 2019 PrepStar All-Central Region as a senior offensive tackle at Cedar Hill (Tex.) High.  As a 2018 junior, he made All-District 7-6A first team and Dallas Morning News All-Area second team.

OL Jonah Monheim—He made 2019 PrepStar All-American and All-Camino League Co-Offensive Lineman of the Year as a senior offensive tackle and guard at Moorpark (Calif.) High.  He was a 3-year starter at Moorpark.

DL Jamar Sekona—He made 2019 PrepStar All-American and All-Marin County Athletic League Player of the Year and Lineman of the Year as a senior offensive and defensive lineman at Marin Catholic High in Kentfield (Calif.).  He was a 3-year starter with 150-plus tackles and 21 sacks.  He had 71 tackles with 9 sacks in 2019.  As a 2018 junior, he made USA Today All-California second team, Cal-Hi Sports All-State Medium Schools first team, Max Preps All-State Medium Schools second team, Cal-Hi Sports Junior All-State first team, San Francisco Chronicle All-Metro and All-Marin County Athletic League Lineman of the Year.  He made Cal-Hi Sports Sophomore All-State first team as a 2017 sophomore.  He also was on Marin Catholic’s track team, with bests of 48-8 in the shot put and 108-3 in the discus.  He spent his 2016 freshman season at Tamalpais High in Mill Valley (Calif.).  His uncle is Haloti Ngata, who played defensive line at Oregon (2003-05, earning All-American honors in 2005) and in the NFL with the Baltimore Ravens (2006-14, including on the XLVII Super Bowl champs), Detroit Lions (2015-17) and Philadelphia Eagles (2018).

OT Caadyn Stephen—He made 2019 PrepStar All-Western Region as a senior offensive lineman at Camas (Wash.) High, despite sitting out most of the season with a back injury.  He also was on the track team at Camas.  He spent his 2017 sophomore season at West Anchorage (Ak.) High.

DE Tuli Tuipulotu—He played defensive end as a 2018 senior at Lawndale (Calif.) High.  As a 2018 junior, he made All-CIF Division 5 and South Bay Daily Breeze All-South Bay first team as he had 95 tackles, including 24 for losses (with 9 sacks), plus 2 deflections and a forced fumble on defense and had a 20-yard reception on offense.  He had 49 tackles, including 12 for losses (with a sack), plus 2 forced fumbles and a fumble recovery as a 2017 sophomore.  His brother, Marlon, is a sophomore defensive lineman at USC.