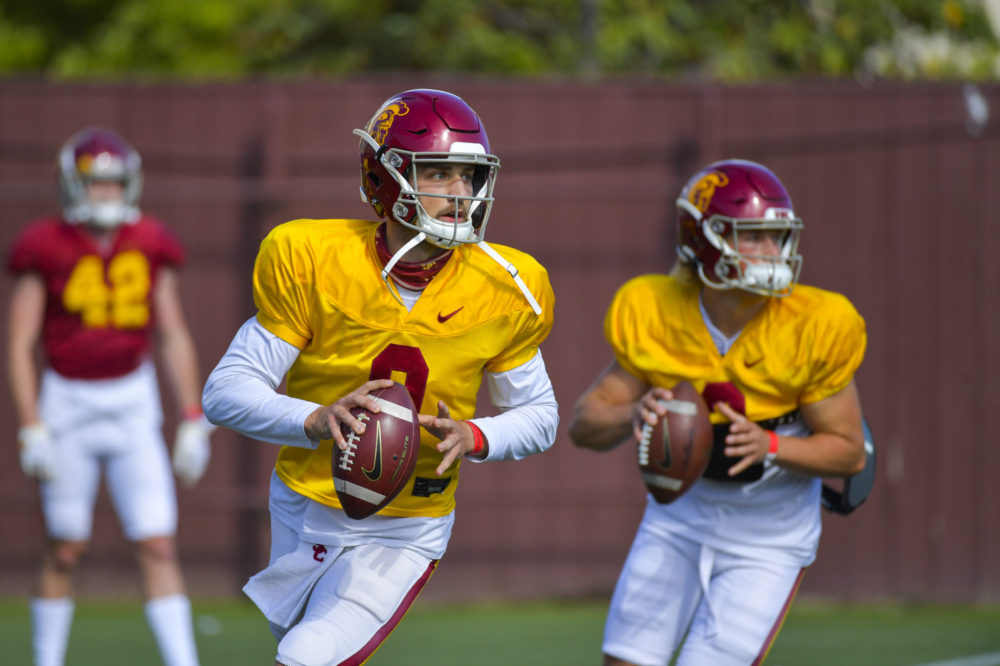 USC’s quarterback depth chart has been anything but a sure thing over the past several seasons and the Trojans were heading into the 2021 season facing a shortage at the position, with only true freshmen Jaxson Dart and Miller Moss positioned behind starter Kedon Slovis. Enter former Oklahoma State quarterback Brendan Costello, who will transfer to USC as a walk-on, according to a weekend report from USA Today’s Pete Thamel.

The move will bring Costello back home and could put him in position to compete for the No. 2 job behind Slovis.

Costello was a three-star prospect in the 2019 class out of San Clemente High School, who held several Power 5 offers before committing to Oklahoma State. The 6-foot, 195-pound quarterback completed 63% of his passes for 2,328 yards and 22 touchdowns against five interceptions as a senior in high school. He was a major threat with his legs as well, rushing 108 times for 658 yards and nine touchdowns. Costello redshirted his first year at Oklahoma State and then entered the transfer portal in the spring of 2020.

USC has just three scholarship quarterbacks on its roster right now and a spot opened when Mo Hasan, also a walk-on, who came to USC from Vanderbilt via the transfer portal, was lost for the season due to an ACL injury suffered during USC’s spring game.

Costello won’t push Slovis for the starting spot, but he gives USC another capable arm in the quarterback room and someone who has at least seen some defensive looks at this level before.

Slovis has finished each of the last two seasons injured, so making sure that spot has the necessary depth is a priority for the USC offense.

The last few years have featured plenty of shuffling on the quarterback depth chart for the Trojans. There was the early arrival of JT Daniels in the 2018 class, after he’d initially been in the 2019 class. In 2019, USC lost Jack Sears to the transfer portal when Kedon Slovis arrived and was named the No. 2 quarterback. In 2020, Daniels entered the transfer portal and headed out to Georgia. And this season, Matt Fink elected not to return to the program to use his extra year of eligibility. All three of those quarterbacks could have been on the depth chart for the 2021 season.

The race for the No. 2 spot behind Slovis will continue to be something to watch this fall and Costello could factor in there. Hasan gave the Trojans an option with playing experience at this level and while Costello doesn’t have that, he is a talented quarterback.

USC coaches weren’t publicly tipping their hand when it came to comparing the performances turned in by Dart and Moss this past spring, but it was safe to say that Dart had the advantage by the end of spring ball. Moss looked to be hurt by not having a high school senior season, but he had some positive moments as well, making it obvious that he could have a say in this competition at some point.

Getting a full, healthy, bounceback season from Slovis is priority No. 1 for the Trojans at this position. He put together a workmanlike spring and appeared to be all the way back from whatever physical or mental block was causing some of his errant throws during the shortened 2020 season.