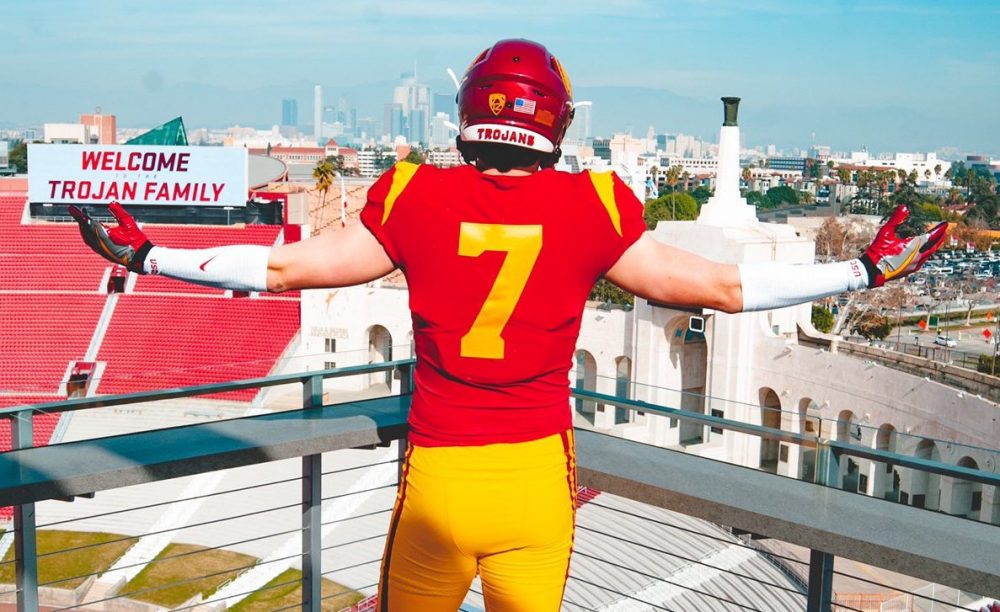 It will likely be a fairly quiet day for the Trojans as the late signing period for the 2020 recruiting class kicks off Wednesday morning, but we’ll keep you updated here with all the news and notes from the day.

USC starts the day with the No. 52-ranked recruiting class in the country, and the No. 10 class in the Pac-12.

USC’s 2020 recruiting class as it stands heading into Wednesday

Tight end Jack Yary announced his commitment to USC. Yary had been committed to the Trojans until he backed away from that this past November. He was down to USC and Washington before electing to rejoin USC’s 2020 class on Monday, heading into today’s signing day.

USC, still in the hunt for a quarterback in this class, extended a late offer to Cade Fennegan (Dallas/Woodrow Wilson). Fennegan originally committed to North Texas (and offensive coordinator Graham Harrell) as part of the 2018 recruiting class before taking his mission. Set to return, Fennegan committed to Boise State in mid-January and will now likely need to decide between sticking with that commitment to the Broncos, or taking the Trojans’ offer.

One of the few targets left on the board for USC is running back Michael Drennen II (Dublin, Oh./Dublin Coffman). The tailback announced Tuesday that he will make his announcement at 6:00 PM local time (3:00 pm PT), with Kentucky looking like the overwhelming favorite.

5:40 AM: Quarterback Blake Shapen (Shreveport, La./Evangel Christian) is officially announced by Baylor. Shapen became USC’s top quarterback target over the past few weeks and took an official visit to see the Trojans in January. But the one-time Arizona State commitment received a late offer from new Baylor head coach Dave Aranda and would up committing there last week. The football and baseball standout stuck with that commitment and signed with Baylor on Wednesday.

8:00 AM: We are now an hour into signing day and there hasn’t been a single tweet from the main USC athletics handle or the football handle. Nearly all of the attention on this day has been removed by the early signing period, but it’s fairly remarkable how much of a non-factor USC has been in this class overall, and especially in the early part of today.

8:20 AM: It’s always interesting to look at what other schools are doing with social media to announce signees, and compare it to what USC is producing. Here are a couple that have stood out today, including Tennessee and former USC offensive coordinator Tee Martin, Arizona and Ohio State, against USC’s early January announcement of signing wide receiver Gary Bryant.

8:30 AM: USC’s hopes for signing a quarterback in this recruiting class look finished as Boise State announced the signing of Cade Fennegan. USC offered Fennegan this week, but he stuck with the commitment he made to the Broncos in mid-January.

8:40 AM: Just to show what kind of morning it’s been for the Trojans, the most noise USC has made on the recruiting trail thus far has been extending an offer to 2021 cornerback Jakailin Johnson (St. Louis/DeSmet). Johnson is the No. 51 prospect in the 2021 class and called USC his dream school, but he already holds offers from Florida, Georgia, Michigan, Notre Dame, Ohio State, Oregon, Texas A&M and others.

9:30 AM: Cornerback Dwight McGlothern (Houston/Klein Oak) is officially in at LSU. McGlothern looked headed to USC for a while until LSU flexed its muscle, extended a late scholarship offer and got McGlothern into the class via a verbal commitment at the All-American Bowl (where McGlothern had two interceptions, including one returned for a touchdown).

12:30 PM: A report from Rivals USC reporter Ryan Young states that quarterback Cade Fennegan has not signed his NLI to Boise State, despite the Broncos announcing him as part of their class. Fennegan, according to Young, via his parents, has not yet made a final decision on his ultimate destination after he finishes his mission.

2:30 PM: USC announces tight end Jack Yary has signed. Yary had been committed to the Trojans for a while until he backed off that pledge in November. He was down to USC and Washington before committing again to the Trojans earlier this week. He’s the 13th prospect signed by USC in the 2020 recruiting class.

3:40 PM: Running back Michael Drennen II (Dublin, Ohio/Dublin Coffman) announced his commitment to Kentucky over USC. Drennen took an official visit to USC in early December and was the last running back the Trojans were chasing in this class. Without a commitment from Drennen, it appears that Yary will be the lone signee on the day for USC.