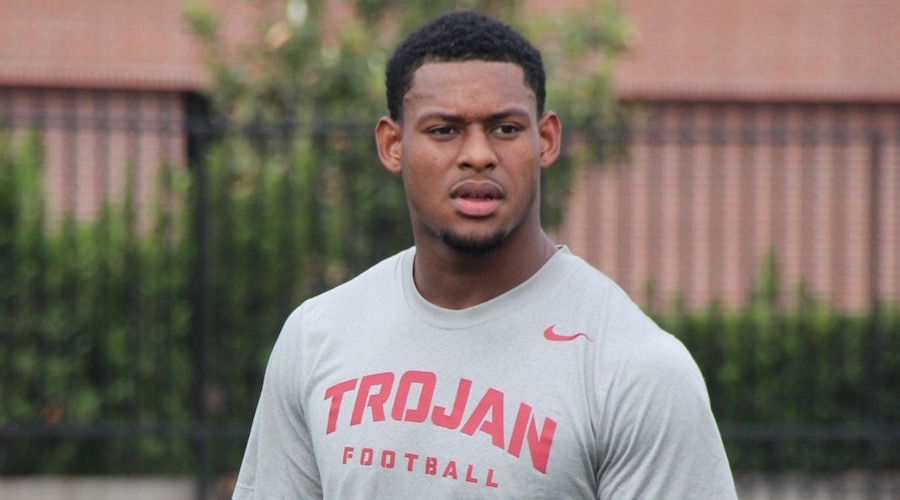 It has been an off-season of change with the USC Trojans – a new football coach, a new quarterback, a new athletic director – and that brings a lot of anticipation to the start of fall camp on Thursday.

By all accounts this should be a very good USC football team, particularly on offense, but there are always question marks with a program in transition to a new staff. Especially with a schedule that is ranked as the toughest in the nation, starting with the defending national champions Alabama in the opener.

Everywhere you look on the USC offense there is experienced talent, all except the quarterback spot. The competition has continued through spring ball and summer workouts between junior Max Browne and redshirt freshman Sam Darnold to take over the starting position but Clay Helton likely won’t make a decision until midway through fall camp. Both players can make a case for the job, Browne with his supreme knowledge of the offense and deep ball ability, and Darnold with his unique physical gifts to make plays.

Whoever wins the QB job he will have plenty around him to work with. Justin Davis is a physical senior running back who has set the tone in summer workouts, and he pairs with the explosive Ronald Jones to form what should be one of the more productive tailback duos in the country. And there might not be a better receiver in the country than JuJu Smith-Schuster, who will be joined by Darreus Rogers as leaders of a very deep position group. The tight end spot offers more options with three talented players in Tyler Petite, Taylor McNamara and Daniel Imatorbhebhe.

As good as the skill players are, the line offers as much talent, depth and experience as any line USC has put on the field in recent memory. You have a pair of senior tackles in Zach Banner and Chad Wheeler, solid options at guard with Viane Talamaivao, Damien Mama and Chris Brown, plus the return of Toa Lobendahn at center along with Nico Falah.

Offensive question that needs to be answered

Helton has made it clear that he wants to see an increased physical element return to the USC trenches, and that goes hand-in-hand with the ability to run the football when needed. In order for that identity to be developed it needs to come together on the offensive line, and all the pieces appear to be in place with a deep group and an old-school position coach in Neil Callaway to guide the way.

Clancy Pendergast returns as defensive coordinator with memories of a top-ranked defense the last time he was at USC in 2013. Pendergast arrives this time to find a defensive line that is short on experience although the coaches did take some steps in the off-season to address the issue with graduate transfer Stevie Tu’ikolovatu and former center Khaliel Rodgers providing depth to a group that is led by Rasheem Green. On the edge, which is where Pendergast loves to apply pressure, Porter Gustin looks ready to take a big step forward.

The leader of the linebacker group will be Cameron Smith, the first true freshman to lead USC in tackles, but it remains to be seen when Smith will be available as he continues to rehab from a knee injury. Look for seniors Michael Hutchings and Quentin Powell, and sophomore Osa Masina, to make their cases in fall camp for increased playing time.

The secondary should be the strength of the defense with a chance for Adoree’ Jackson and Iman Marshall to be one of the best corner duos in USC memory. Pendergast loves to play man-to-man coverage with his corners and that suits both guys just fine. The position switch of Ajene Harris to corner will pay off for depth, and true freshman Jackie Jones will be in the mix right away. Marvell Tell and Chris Hawkins lead a deep safety spot.

Defensive question that needs to be answered

While there were additions to the defensive line depth, will it be enough to stand up to the physical match-ups such as Alabama and Stanford? There are plenty of available bodies for new position coach Kenechi Udeze to mold his way, it will just help if that growth process can happen in a hurry for such a young group.

The placekicking job will likely be split between Matt Boermeester (placekicks) and incoming blueshirt Michael Brown (kickoffs), at least that is the plan heading into camp. Chris Tilbey looks to take over at punter. Zach Smith is back at long snapper. Adoree’ Jackson and JuJu Smith-Schuster were the primary return guys last season but there are other options available if the coaches don’t want to use those two stars.

Helton couldn’t have had a much better off-season, from signing day success to endearing himself to fans and boosters to instilling a cohesive atmosphere in the program. All that stuff is great, but it doesn’t answer the question about his coaching acumen for the job. There’s simply know way to know for sure if he is the right guy until we see the results with his staff and plan fully in place. And that time is at hand. He’s had a lot of preparation for this moment, ten games in fact where he was the interim coach or head coach at the end of last season, and he’s been on the staff the entire time every player on the roster has been here. That’s a lot of familiarity to help lessen the learning curve for a first-year coach. And while the schedule makers didn’t do him any favors, you would be also hard-pressed to find many coaches who wouldn’t gladly trade for the talent he has available to him.