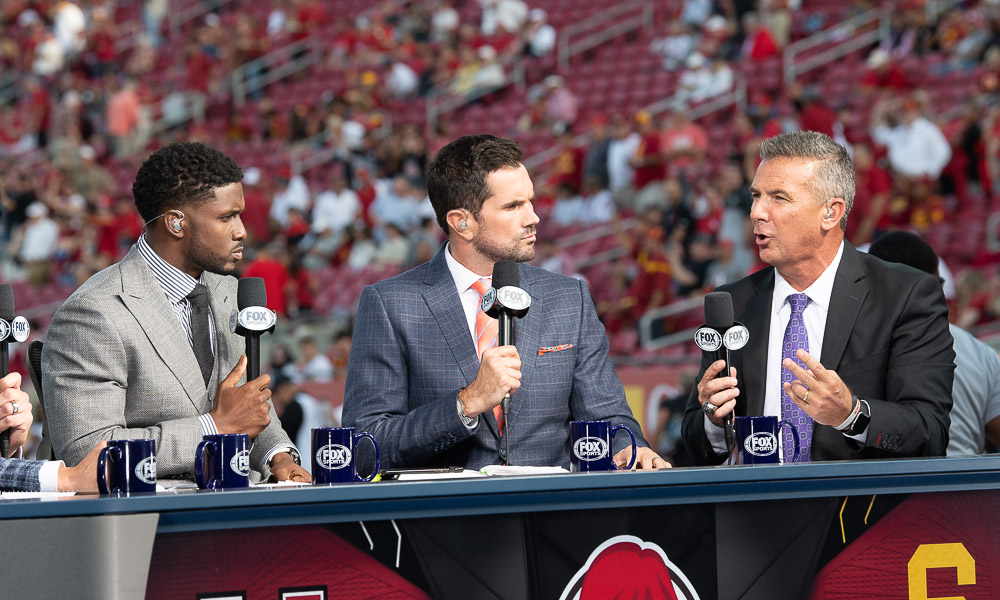 When talk on the Fox set turned to USC on Saturday morning, former Trojans Matt Leinart and Reggie Bush offered a few thoughts about USC’s one-point win against Arizona State last weekend. Leinart talked about USC quarterback Kedon Slovis finding checkdowns with his running backs, while Bush spoke about USC’s spotty run defense against the Sun Devils. Then Urban Meyer stepped up and tried to drill down to the heart of the matter for the Trojans.

“Every conversation around USC is about throw and catch,” Meyer said. “Throwing and catching doesn’t win championships by itself. What about defense? What about toughness? What about special teams? What about running the ball when you have to run the ball? This is still USC and I go back to the glory days of watching you guys (Leinart/Bush) play. Yeah, you threw and caught. But you know what, you ran the darn ball and your offensive line came smoking off the line of scrimmage. This is still the game of football. I want to see USC get the big tough guys up front, move people off the line of scrimmage. At the end of the day, football is still football. Yes, throwing and catching is really important. By itself, you’re not going to win a championship.”

USC struggled with its short-yardage running game against Arizona State last week. The Trojans should have an opportunity to get things going on both sides of the ball today against an Arizona team missing some key pieces from last year’s team and playing its first game of the 2020 season.

Just before the game kicked off, Meyer offered his final thoughts on USC. He touched on a few positions, but ended it by saying it’s time to focus on the most important position: offensive line.

“If you want to start winning championships, let’s start talking bout the power and offensive line and physicality of USC,” Meyer said.