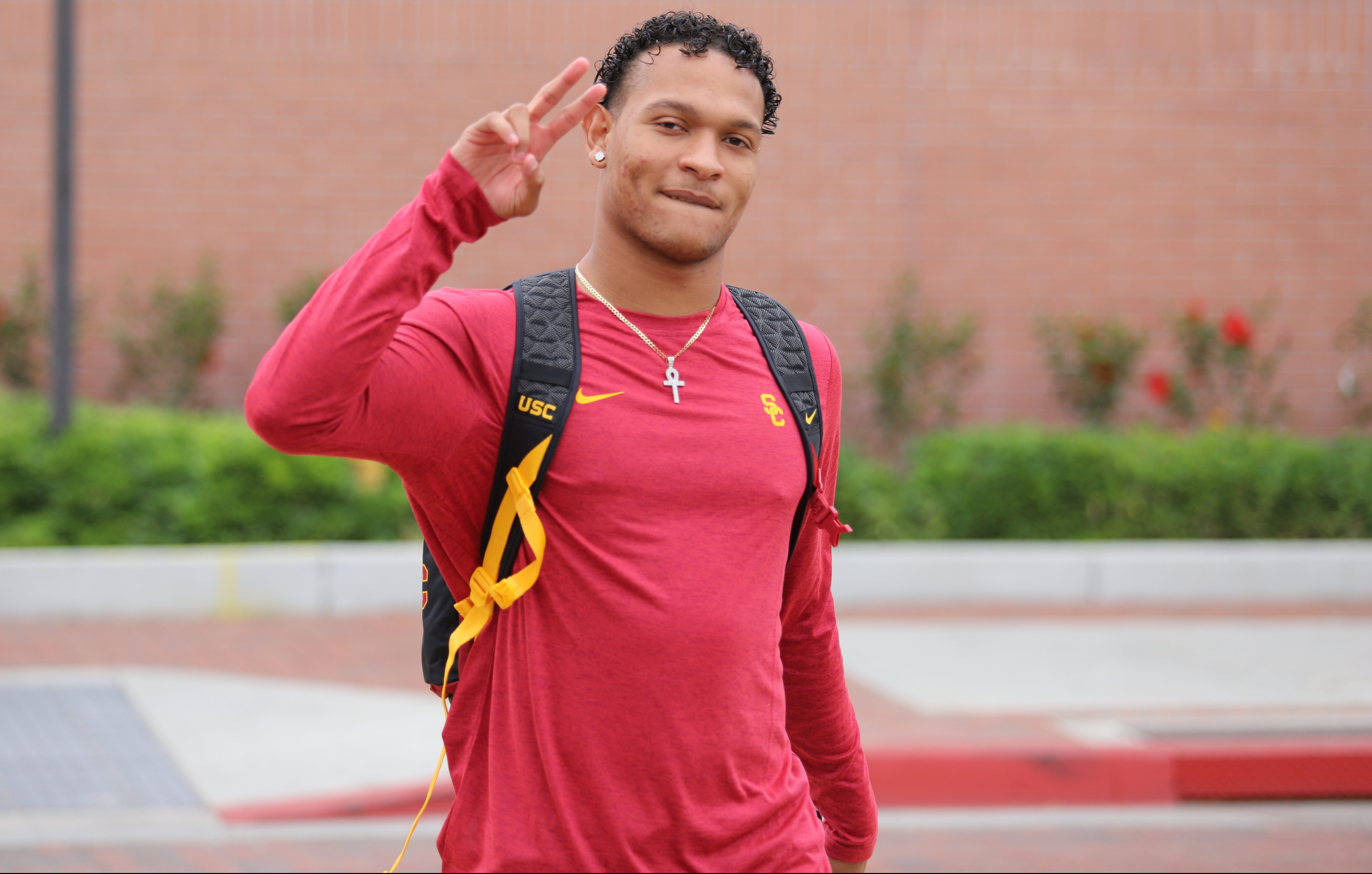 The newest members of the USC Trojan football team have their uniform numbers for the 2019 season.

All told, 27 new members of the team had their uniform numbers revealed in a post by the official site.

Of the 27, 11 took part in spring ball and already had their numbers assigned.

Of the newly revealed numbers, plenty of attention will be paid to the wide receiver position, where four new additions join the roster. Kyle Ford will carry over his familiar No. 81, which he wore at Orange Lutheran. The other three freshmen receivers are Munir McClain (No. 13), Bru McCoy (No. 14), and Drake London (No. 15).

McClain will share his No. 13 with cornerback Adonis Otey, a 6-foot-1, 180-pound corner who was a late addition to this recruiting class but should have an opportunity to compete for early playing time at a position where experience is scarce and depth is even more so.

Fellow cornerback Chris Steele (photo above) begins his USC career as No. 8, taking over a number vacated by longtime USC starting cornerback Iman Marshall. Steele will need an NCAA waiver in order to be eligible to play this season, but if that is granted, there should be an opportunity for Steele to see the field early and often.

Elsewhere in the defensive backfield, safety Dorian Hewett is No. 22, safety Kaulana Makaula is No. 23, and safety Jayden Williams is No. 29.

Tuasivi Nomura (No. 44) and Maninoa Tufono (No. 45) join the linebacker corps, and Tufono, listed at 6-foot-3 and 235 pounds, is someone to keep an eye on as a potential immediate-impact player.

Rounding out the defensive additions is defensive tackle De’jon Benton (No. 79) a late recruiting flip from Washington State.

The offensive backfield will get an injection of pure speed from running back Kenan Christon (No. 23), the Gatorade Track & Field Athlete of the Year for California after winning the state championship in the 100 and 200 meters. Christon tied the state meet record in the 100.

Perhaps the most intriguing addition to the roster is offensive tackle Drew Richmond (No. 53). The graduate transfer from Tennessee begins his USC career looking to help solidify an offensive line that has to take a gigantic step forward from the 2018 season. We should see Richmond jump straight into a fall camp battle for a potential starting spot at right tackle.

Richmond is joined in the offensive line room by Jason Rodriguez, who will wear No. 77 at USC. That number comes with plenty of history behind it, as it was worn by Ron Yary, Sid Smith, Pete Adams, Anthony Muñoz, Pat Harlow, and Jacob Rogers, among others.

And rounding out the new additions is tight end Ethan Rae, who will wear No. 85. Rae is coming off two ACL injuries, but looks to be running well during the summer throwing sessions. He and Wolfe should provide a huge boost to the tight end group down the line, or potentially even this season if he is healthy enough to contribute.

A few other interesting roster notes.

Cornerback Chase Williams is now No. 7, after wearing No. 17 last season.