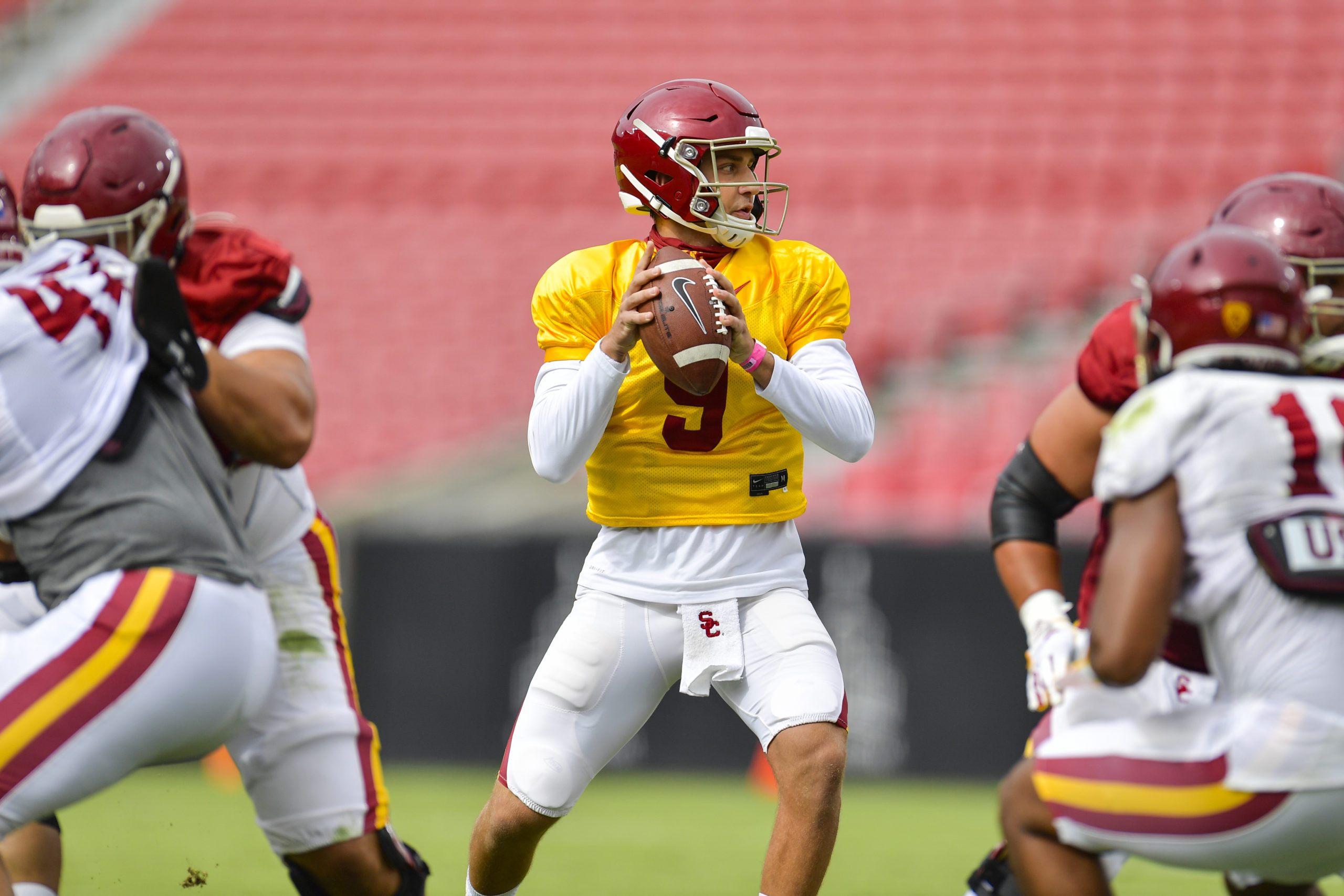 With two fall scrimmages behind them, the USC Trojans will spend this week looking ahead a bit to their season opener against the Arizona State Sun Devils. Head coach Clay Helton said the Trojans this week will straddle the line between fall camp–where the focus is solely on themselves and improving fundamentals–and getting into full-blown opponent prep, as USC will begin putting in some schemes for the Arizona State game.

“This week, we’re two weeks away from getting ready to play ASU,” Helton said during his media availability on Monday morning. “We’ll continue good, competitive drill work–good on good–but we’re also going to start our Arizona State gameplanning this week.”

Helton said that both coordinators–Todd Orlando on defense and Graham Harrell on offense–pushed to keep working the competitive aspects of practice with starters going up against starters.

“Now we shift to starting some basic game plan for ASU, but in talking to our coordinators, they still don’t want to leave the competitive aspects of getting good on good,” Helton said. “So it will be a mix this week of doing half continuing to concentrate on us and us getting better fundamentally, and working on putting in some basic schemes for ASU.”

USC will get one more opportunity to acclimate itself to the 9 am kickoff on November 7. The Trojans held an early-morning scrimmage this past Saturday, which will serve as the final true game-like atmosphere in terms of both off the field and on, before USC kicks off its season.

“We had an unbelievable, great experience on Saturday,” Helton said of the scrimmage. “To be able to get a morning opportunity that’s going to be extremely similar to Saturday, November 7, I thought was really important. It was our second chance at that. I thought our kids handled it extremely well.”

Helton said the USC marketing staff and Coliseum handled the scrimmage in a way where the environment perfectly mirrored what they will experience in that first game, from the music to crowd noise.

“It was more a game simulation than the first scrimmage that we had, and it felt like a game,” Helton said.

Helton also said that there was a “major difference” between how the team handled this scrimmage and how they handled the first one. USC will get one more opportunity in the Coliseum–another scrimmage this coming Saturday–but Helton said it probably won’t be as physical as this past scrimmage.

“We’re going to do it one more time,” Helton said. “Probably not as physical as this last one, but the ability to go through each phase of special teams, all situations offensively and defensively, and really have a mock game-like situation one more time for our kids before we hit November 7.”

It was the defense that stood out during this most recent 81-play scrimmage, and Helton said that was good to see considering the offense was the clear winner during Thursday’s full-pads practice.

The USC defense played without defensive coordinator and linebackers coach Todd Orlando, who was back home tending to what Helton called a “personal family matter.” In his place, safeties coach Craig Naivar called the defense and Helton credited him with a terrific performance.

He commended both Naivar and cornerbacks coach Donte Williams for their work with the secondary this fall. After giving up some big plays through the air in the first scrimmage, the secondary bounced back this past Saturday.

As for the defense overall, Helton said of the four defensive position coaches, “I can’t believe how far we’ve come in such a short period of time, and it has a lot to do with the investment they’ve put in since July.”

“I’m really expecting huge things from him this year,” Helton said of Gaoteote.

He said Ralen Goforth, who is working as the starter at middle linebacker with Kana’i Mauga sidelines, has had a really good camp. Tuasivi Nomura has also taken advantage of the extra reps he’s gotten due to injuries ahead of him.

Helton said they expect to get Mauga and Tayler Katoa back soon, and that Raymond Scott has also been added to the linebacker depth chart, as he makes a move back to that position from safety, where he’d been playing since spring of last year.

There are still a couple of starting spots that might be up in the air–Goforth and Mauga at middle linebacker, or how the running back depth chart shakes out when Markese Stepp and Vavae Malepeai return from injury–but Helton said he’s focused on figuring out how the backups shake out.

“The twos are really what I’m really looking forward to,” Helton said. “I think that’s where the most competition is at right now…We worked three groups in that scrimmage and all three groups really produced. There weren’t a lot of missed assignments. There weren’t a lot of lack of fundamentals. Credit to our coaches; I think they’re doing a nice job building from the ground up.

Helton mentioned Stepp, Mauga and wide receivers Gary Bryant Jr. and Josh Jackson Jr. as players who still need to return from injury and could dictate what the Trojans look like in that first game against the Sun Devils.

Helton specifically mentioned the play of some of the backup offensive linemen during the scrimmage. Casey Collier, Liam Douglass, Justin Dedich, Jason Rodriguez, Courtland Ford and Jonah Monheim are the names consistently mentioned just behind the five starters. Helton said he told that entire group that he’s comfortable with any of them needing to enter a game and being able to contribute.

Helton said Saturday provided some great insight into the special teams play. With new coordinator Sean Snyder unable to implement his scheme during the spring, this was the first time they were able to get to see all phases of special teams in a live setting.

“Bring able to see the specialists, returners, scheme, and put it to full speed use was great to evaluate off of,” Helton said. “So it was a good day there.”

Helton said starting quarterback Kedon Slovis continues to develop mentally, but it’s his physical maturation that has been truly striking heading into his sophomore season.

He said Slovis poured himself into his strength training beginning in May, once his arm was fully healed, and is up to 215 pounds at nearly 6-foot-3. Where he looked the part of a true freshman last season, Helton said that’s no longer the case, and his throwing ability is the better for it.

“I think he’s developed a lot of core strength,” Helton said. “He’s always had great arm talent, but he’s making every throw on the field. He’s making back-shoulder throws 35 yards downfield and everybody on the field is going, ‘Whoa.’ You’ve got to have some special arm talent and strength to be able to do that.”

Helton praised both Orlando and Harrell for their total control over their sides of the ball, which has allowed him to focus elsewhere this fall camp and moving forward.