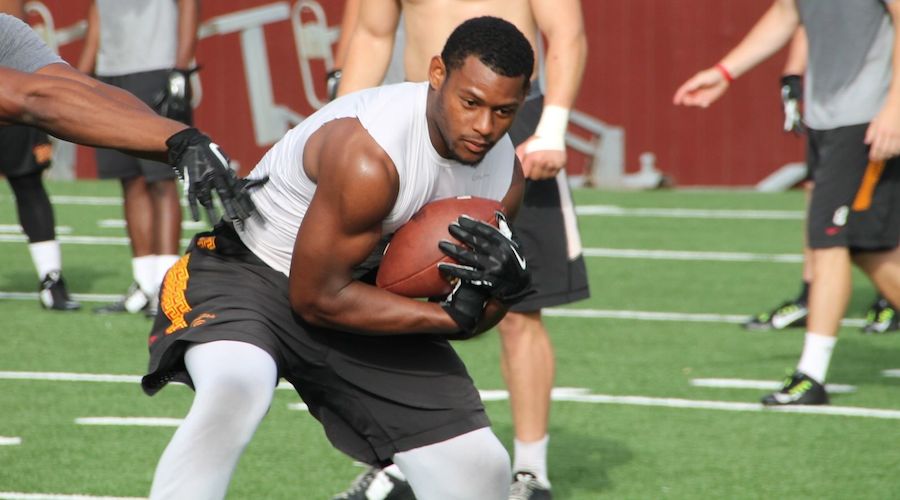 The throwing session this morning got started with some early action for the defense in 7-on-7 with three interceptions, one apiece by Matt Lopes, John Platternburg and Jonathan Lockett. There was also a nice deep completion on the opening play from Cody Kessler to Christian Tober.

Lots of work for the running backs today, both running and catching the football. Ricky Town hit Dominic Davis with a swing pass that allowed Davis to show his burst after he caught the ball. There were also plays by Tre Madden, Justin Davis, Jahleel Pinner and Aca’Cedric Ware. Ronald Jones left shortly after the 7-on-7 started, while Soma Vainuku took part in the conditioning session but left immediately after that.

It was a limited group at defensive back so a few guys took a ton of reps. There was no Seymour, Adoree’, Biggie, Langley, McQuay or Ross, while Tell was there but didn’t take part. That meant the foursome of Lockett and Hawkins at corner and Plattenburg and Lopes at safety took almost all, if not all, of the reps. At one point when the second unit was going, Kessler filled a water bottle and ran it out to the secondary to give those guys a chance to get a drink.

Deontay Burnett had one impressive catch along the sideline where he had to extend his arms to bring the ball in, nicely done. I heard Isaac Whitney get praise from the quarterback on two separate plays for running a nice route.

Devon Kennard was in attendance.

Click here to view photos from the throwing session