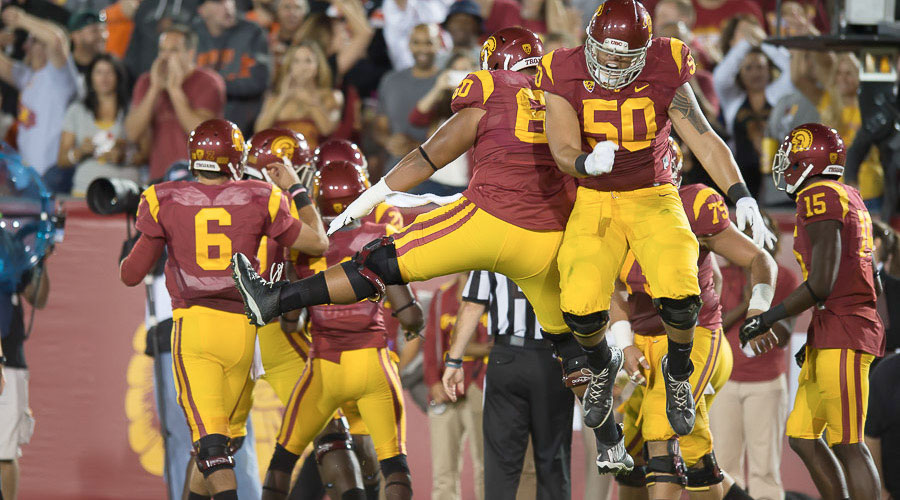 The Trojans are coming off a disappointing 38-20 loss to UCLA in the Rose Bowl, but with another rivalry game on tap against Notre Dame this weekend, Steve Sarkisian’s squad was in high spirits as they took part in a physical, full-pads practice session on Tuesday, with the USC head coach noting afterwards that his team has successfully switched their focus.

“It was good to get with the team yesterday and kind of get some closure on the game – to kind of understand where our downfalls were, areas where we can improve, and put that to bed, move forward and focus on Notre Dame,” Sarkisian said. “This is a great matchup for us. It’s a great matchup for them. Two teams that are kind of fighting with their backs against the wall. We’re in very similar situations. I think both teams will be hungry, ready to come out and put on a really good show in the Coliseum on Saturday.”

In addition to it being another rivalry game, another factor that is providing added motivation for USC players like quarterback Cody Kessler is the fact this weekend’s contest will mark the final time that the seniors on the team will ever line up in a Trojans uniform in the Coliseum.

“This is the last game for Randall [Telfer] and Hayes [Pullard], guys that have been through so much here, and we’re playing for them,” Kessler said. “We’re playing for the Trojan family and all of the guys before us that played in this game – the USC-Notre Dame rivalry game – so guys are going to be ready, and I think they showed that today at practice.”

With the USC offensive line having struggled as of late, and particularly so against the Bruins, there was a change on Tuesday as freshman Damien Mama ran exclusively with the No. 1 unit at left guard in place of Khaliel Rodgers, who has started the past three games at that spot.

The 6-foot-5, 370-pound Mama was a starter for the Trojans in the team’s first two games of the season, and while he has contributed steadily as a key reserve throughout a majority of the rest of the schedule, he’s also been hampered by some injuries – most recently a knee injury that forced him to miss the Washington State game on Nov. 1.

Now fully healthy, however, he’s begun to make his presence felt in a major way, once again. He played significant minutes against UCLA, and now appears poised to reassume his role as a starter.

“Just being able to compete out there with the ones, it’s good to be back up there,” said Mama following practice.

Sarkisian is encouraged by what Mama has shown when he’s been healthy.

“Damien is a very powerful guy — really strong hands,” Sarkisian said. “When he gets on double teams and different things he can really move bodies to create running lanes. When he’s healthy, he’s really good. He’s obviously battled through a different couple things here throughout the season that have kind of held him back some, but he appears to be healthy again, and so hopefully we can utilize his talents.”

– Safety Leon McQuay III wore a yellow non-contact jersey and ran primarily with the No. 2 defensive group. Gerald Bowman and John Plattenburg lined up with the No. 1 unit at the two safety spots.

– Josh Shaw, who returned to practice last week and participated in his first game of the year for the Trojans this past Saturday, saw time at cornerback and nickelback on Tuesday – at times with the No. 1 defense.

– There was a wide receiver-defensive back one-on-one period that got the players animated. Josh Shaw had a nice pass-break-up against Darreus Rogers, Kessler hit Nelson Agholor with Seymour in coverage, Max Browne connected with Steven Mitchell against Bowman, and Kessler hit JuJu Smith deep along the sideline with a walk-on in coverage.

– Javorius “Buck” Allen and Justin Davis had a fairly light day, although Allen did break off a nice long touchdown run during a service team period.

– Kessler kicked things off by connecting Agholor over the middle about ten yards downfield, and he turned on the jets and picked up another 15 yards before Jackson made the stop.
– Bowman tipped a Kessler pass at the line of scrimmage.
– Leonard Williams came in and stop James Toland IV for a loss.
– Kessler hit Telfer outside for a pickup of seven or eight.
– Browne completed a pass to Ajene Harris for close to ten yards before McQuay made the stop.
– Olajuwon Tucker and Co. sacked Browne.
– Claude Pelon stopped Toland after a short gain.
– Browne connected on a deep pass to George Farmer at the pylon to complete a 35-yard touchdown play with Matt Lopes in coverage.
– Pullard stopped Toland for a loss.
– Pullard stopped Toland for no gain.
– Delvon Simmons stopped Toland after a short gain.
– Vainuku ran for five or six yards before Michael Hutchings made the stop.
– Kessler hit Farmer outside for 10 yards with Seymour in coverage.
– Kessler completed a seven or eight-yard pass outside to Telfer before Shaw made the stop.
– Kessler hit Smith over the middle for close to 10 yards.