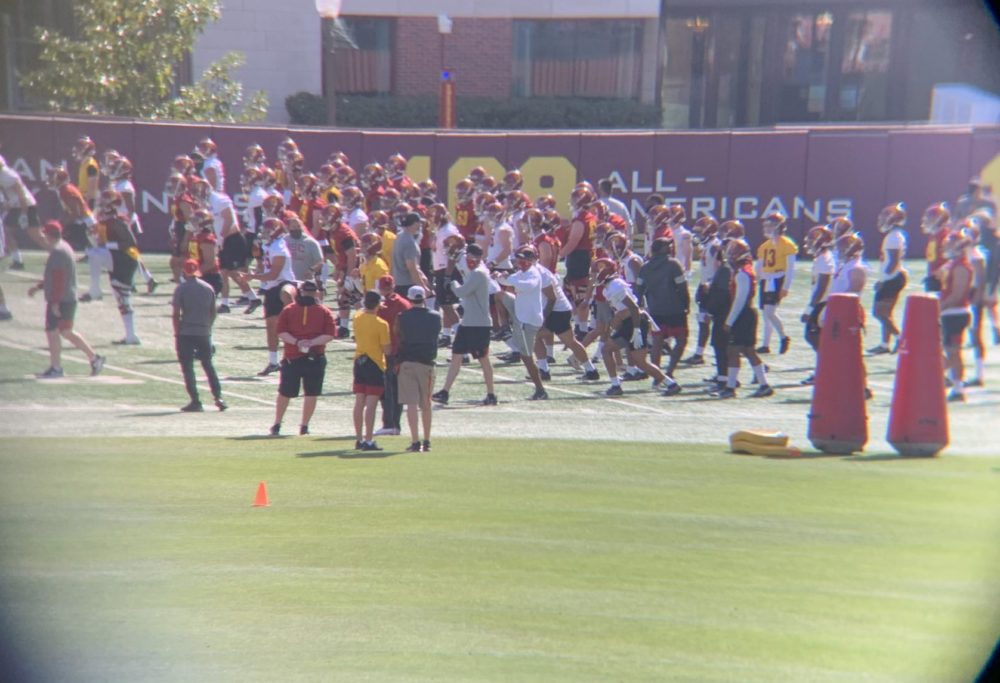 USC’s 2021 spring ball kicked off on Tuesday, as the Trojans took to Howard Jones and Brian Kennedy Fields for the first full practice of the spring. It was a session that was more notable for who wasn’t in attendance compared to who was, but there were more than a few interesting notes from Tuesday’s practice.

Head coach Clay Helton said earlier Tuesday that USC would be without some players due to health and safety protocols. He did not name any of those players specifically.

Absent from Tuesday’s practice were some major names, though without media availability following practice, there is no confirmation that the missing players were specifically due to health and safety protocols.

Inside linebackers Jordan Iosefa and Solomon Tuliaupupu did not participate either, but Helton said previously they would both be continuing their knee rehab assignments.

That meant seven of the 22 potential starters, including six of 11 defensive starters, did not practice on Tuesday.

That’s a nice feather for Ford that he’s the first one up as USC looks to replace Alijah Vera-Tucker at left tackle. It’s noteworthy because Ford played left guard last season and started there against Washington State, so he’s making a bit of a position move in heading out to tackle.

Offensive coordinator Graham Harrell said they would likely take a look at a number of offensive linemen in a number of different positions and different unit arrangements. But in terms of Tuesday’s practice as a standalone event, there wasn’t any movement.

The defensive line did not have Pili or Alabama transfer Ishmael Sopsher available in the interior, so the first unit was Tuli Tuipulotu, Jamar Sekona and Jacob Lichtenstein, with Hunter Echols at outside linebacker.

The second defensive line was Caleb Tremblay, Kobe Pepe and De’jon Benton up front with Juliano Falaniko at outside linebacker.

One of the striking visuals during Tuesday’s practice was the overall number of players present on the field. It is a huge roster for spring with the addition of 14 newcomers plus the seniors who are using their extra year of eligibility. Even with so many players missing due to injury or other reasons — and some positions are definitely thin — there are a bunch of players out there.

The offensive line had 18 available bodies, which is a huge number compared to what we’ve seen in the recent past. There were nine safeties, eight defensive linemen and six tight ends.

The two light spots right now are at wide receiver and inside linebacker.

Drake London and Gary Bryant are the two go-to receivers right now, and K.D. Nixon is going to quickly make his presence felt. John Jackson III was involved throughout and true freshman Michael Jackson III had a nice showing. But that’s just five scholarship receivers going today, and walk-ons were called upon quite a bit.

It was good to see Kyle Ford going through drills, but he’s not going to be pushed anywhere near contact yet. Getting McCoy back will obviously be huge.

The Trojans struggled with numbers at inside linebacker last season and not having Goforth available today moved Raymond Scott into a starting spot alongside Kana’i Mauga. Walk-ons Clyde Moore and Danny Lockhart Jr. ran with the second team.

A few of the newcomers absolutely jumped out on the first day. Running back Keaontay Ingram is definitely going to be a player to watch. He’s such a big body and has a very interesting style to his game, where he’s doing so much movement with his arms and legs but everything is so under control. There were a few times on Tuesday where he was able to make a catch while instantly performing a spin move around a defender. There was no contact because there were no pads, but it wasn’t hard to see that even with a seemingly clear shot, it might have turned into a tough tackle. He’s a terrific receiver and was able to show off his hands a few times.

K.D. Nixon is a little reminiscent of former USC cornerback Nickell Robey-Coleman with his smaller stature, big personality and No. 21 jersey, but he’s thicker than Robey (obviously plays a different position). Just one practice in, and it’s pretty clear that Nixon is going to be a factor this season.

Joshua Jackson Jr. isn’t technically a newcomer, but he fits here because he’s flipped over to cornerback and showed up for the first time at a new position. It’s interesting that both he and Isaac Taylor-Stuart are wearing No. 6 at cornerback. That might need to change this season, because Jackson was very impressive in his first outing there. He had back-to-back pass breakups and the second one was really nice, as the offense tried to pick on him a bit. The first play was a slant where the wide receiver stopped short and the quarterback led him, with the ball hitting Jackson in the hands for a play he’d probably say he should have caught. The offense went right back at Jackson the next snap and tried to get over the top. Jackson was a step behind the receiver, but showed great timing and instincts in going up and getting his hands up in the way of the ball with his back to the quarterback.

Tight end Ethan Rae gets the same treatment here. He’s definitely not a newcomer, but this was his first full practice at USC after dealing with injury recovery his first two years. It was great to see him out on the field and even better to see him contributing in a meaningful way. He had one of the catches of the day, going up high over a linebacker to bring down a lofted pass as he landed on his back and secured the catch.

The freshmen quarterbacks were always going to be big talking points during spring ball. Jaxson Dart went ahead of Miller Moss in virtually every drill, not that there’s much to be gleaned from that in just one practice. Dart had a few plays where you could see the athletic ability as he rolled out and fired downfield on the run. But both looked like very talented true freshmen playing in their first practice at this level. Both fumbled handoff exchanges that resulted in turnovers and both threw late into coverage with passes that probably should have been intercepted. There’s a lot to like about their games, and this is going to be a fun battle to watch.

Helton said Tuesday that USC would need to find its kickoff and punt returners this spring. The Trojans trotted out the same group for both, as Gary Bryant, Stephen Carr, Michael Jackson III, Brandon Campbell, K.D. Nixon and Keaontay Ingram all rotated through.

It was difficult to watch both the offensive and defensive linemen one-on-ones and the seven-on-seven work between the offense and defense, as it was taking place simultaneously on different fields. So this definitely isn’t a complete representation of the battles between the lines.

Defensive end Caleb Tremblay was a problem for just about every offensive lineman he went up against. He appeared to be the star of the drill.

Tuli Tuipulotu put together some impressive reps, and Jamar Sekona had a great day, bouncing back nicely after getting stopped cleanly by Brett Neilon on a couple reps.

Jay Toia got stood up by a few offensive linemen, including Jason Rodriguez on one rep. Toia possesses impressive size and strength, but it seemed from this one practice that he’ll need to continue developing some pass rush moves. The talent is there, but sometimes being the biggest and strongest at the high school level doesn’t immediately translate at the next level when the size is equal.

Gary Bryant was a major target every time he was on the field and Kedon Slovis found him on his first two throws of the 7-on-7 portion of practice. Slovis then found Drake London and Michael Jackson III for big games before Joshua Jackson Jr. had his first pass breakup of the day.

Max Williams nearly had an interception of Dart, when Williams jumped underneath a crossing receiver. Isaiah Pola-Mao helped stall the possession when he was able to just tip away a pass intended for Josh Falo.

Miller Moss tried to hit K.D. Nixon with a deep ball but Isaac Taylor-Stuart recovered nicely to force an incompletion after it looked like Nixon had a step on him early.

Freshman tight end Lake McRee had a nice reception on a comeback route where he had to go out and get it with his hands.

John Jackson III had one of the plays of the day when he went up high down the sideline to grab a deep ball from Mo Hasan. Cornerback Adonis Otey had great coverage and got his arm between the ball and Jackson’s chest, but he wasn’t able to get it out as Jackson came down to the ground with the ball.

Jackson Jr. then recorded what looked like a sack fumble when he came in and knocked the ball away from Slovis as the quarterback held the ball looking for a receiver.

It didn’t happen in 7-on-7, but Slovis found Bryant for a big offensive play during run drills, when they took a shot downfield. Bryant got behind Taylor-Stuart on the play to bring in the long completion, but safety Chase Williams got an earful from safeties coach Craig Naivar. Overall though, it seemed like there was a lot to like from the secondary during the practice.