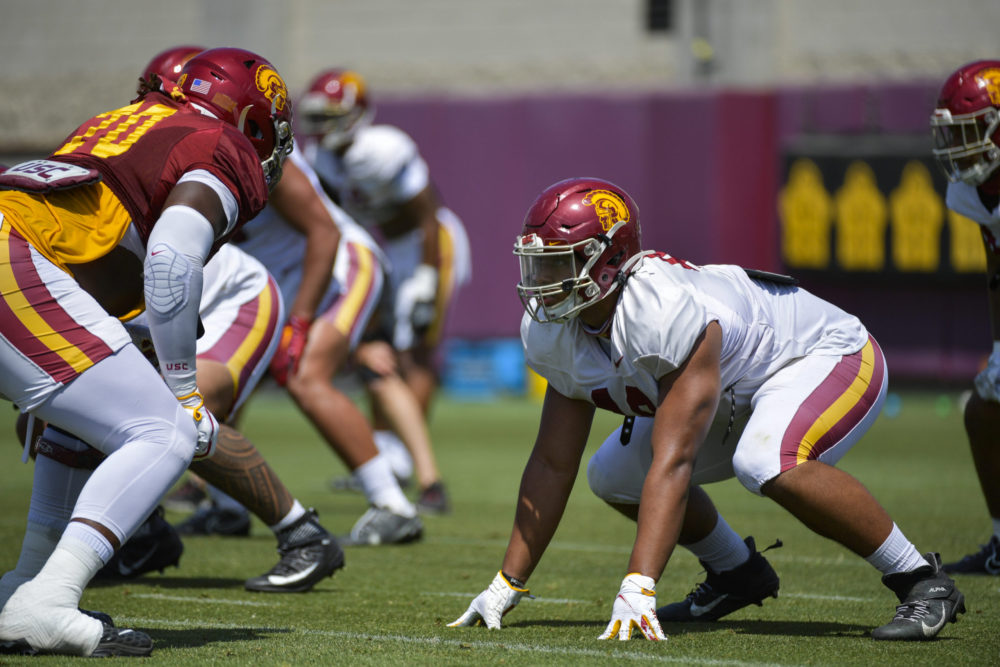 USC kicked off its fifth and final week of spring ball with a Tuesday afternoon practice that featured standout plays from two expected sources, a few new offensive line units and a substantial group of players sitting out due to various injuries.

Wide receiver Drake London and defensive end Tuli Tuipulotu continue to turn in phenomenal spring ball performances. London is the best offensive player going for the Trojans right now and Tuipulotu might be in the discussion for the best defensive player this fall (Drake Jackson will obviously have something to say about that).

On Tuesday, London made several receptions where there was really nothing any defender could do. He got deep down the sideline against good coverage from Chris Steele, but when Kedon Slovis’ pass arrived, London was able to turn his head late, make a subtle adjustment and easily bring it in. He got Steele again on a similar play, although Steele might have been looking for a push off call against London in a game. London went up high to catch a bullet throw from Slovis in front of a defensive back. And London finished his day by hitting a long touchdown on a post route against Xamarion Gordon. Slovis saw that matchup of London on against a true freshman safety from the snap, if not before, and simply waited for London to get himself open.

Tuipulotu picked up two quick sacks during the team period, beating Jonah Monheim both times. He combined a little later on a sack with Ralen Goforth.

Three players who went down during Saturday’s practice remained out on Tuesday. Offensive lineman Liam Jimmons, running back Brandon Campbell and wide receiver Michael Jackson III all sat out practice.

Stephen Carr went to the trainer’s table during practice after it looked as though he might have tweaked something in his leg during a run into the endzone.

With Jimmons out due to injury, USC slid Jalen McKenzie in from right tackle to right guard and Jonah Monheim remained in at right tackle. The left side of the line featured Courtland Ford at left tackle, Andrew Vorhees at left guard and Brett Neilon at center.

The second group featured some mixing throughout practice, but Casey Collier and Jason Rodriguez took all or most of the snaps on the left side of the second line. Gino Quinones continues to get a lot of looks with the second team at guard. Ford played a little right tackle today in addition to a bulk of the time at left.

There were some ups and downs for the offensive line today. This was a non-full contact day, so everything is taken with that grain of salt, knowing the defense wasn’t going to the point of taking players to the ground. NCAA rules don’t allow for full tackling at every spring ball practice.

The line got off to a great start during run drills, as it opened a huge hole right up the middle for Vavae Malepeai to get through.

Jacob Lichtenstein got into the backfield for a tackle for loss on the next snap and offensive line coach Clay McGuire addressed Ford after the play.

Keaontay Ingram found a hole following a nice block from Andrew Vorhees, who pulled on the play. There were some atta boys from the offensive teammates directed toward Monheim and McKenzie on the right side.

Jamar Sekona had a tackle for loss against the second-team offensive line. Sekona had a very active day and he’s become a pretty safe bet to contribute this fall.

Tight end Lake McRee had a nice block on a play and also looked to mix things up a bit against outside linebacker Hunter Echols. Echols responded on the very next play with a physical stop at the line of scrimmage, but McRee has impressed as a willing blocker, a target with very reliable hands and a guy who can take a hit and keep going.

Offensive guard Liam Douglass has missed some time this spring, but he had a nice block on a run here as well.

While London was unstoppable at times on Tuesday, the biggest defensive play of the day proved that he wasn’t unstoppable all the time. Slovis looked to hit London on a slant to get the drill started, but cornerback Isaac Taylor-Stuart was able to get his hand in and knock the ball into the air, eventually getting intercepted by safety Xavion Alford.

Taylor-Stuart nearly grabbed an interception of his own on the next play. Slovis tried to hit a receiver on a corner route but Taylor-Stuart read it well and was able to drop back into the line of the throw. It looked like it was going to be a sure pick but Taylor-Stuart couldn’t quite bring it in.

Quarterback Jaxson Dart had one of the best throws of the day, when he was able to hit London along the sideline. London went out and up against Steele and Dart was able to fit it on a line to London before Steele could drop back or Chase Williams could get over.

Dart found Erik Krommenhoek on a well-placed deep ball, but Williams likely wants to see that play again, because Krommenhoek might not have enjoyed the hit Williams would have been ready to put on him had this been a game or a full-contact day.

Tuipulotu’s two sacks came on the first drive of the team period. The offense did get a bit of revenge as Vorhees put a nice block on Tuipulotu during a Malepeai run following the sacks.

With the second team in, Dedich and Quinones combined to lead Quincy Jountti to a nice gain.

Sekona recorded a sack of Miller Moss when he had nowhere to throw to due to good downfield coverage.

Julien Simon ran down Jountti on a wide run. Simon looks to still be adjusting to the speed of the game at this level, but he’s making notable progress of late.

Slovis found Nixon on a quick throw, but Taylor-Stuart and Gordon did well to corral Nixon early.

Slovis made a really nice throw on the run, forgoing the short completion and instead lofting it over a defender to Nixon on the sideline, but it looked like Nixon’s toe landed on the sideline for an incompletion.

Slovis finished his day with the beautiful touchdown toss to London deep down the field.

With Dart in at quarterback, Quinones and McKenzie combined to help spring Jountti for a long run.

Parker Lewis drilled field goals from 41, 47 and 52 yards. The 52-yarder would have been good from at least another five yards and probably more.

Alex Stadthaus connected from 41 and 47 but miss-hit the attempt from 52, which came off his foot funny and wound up well short.

Other areas of note

Wide receiver Kyle Ford won’t go through contact drills this spring, but he’s doing all the individual drills and running routes. He had an opportunity today to let loose and go chase down a deep ball from Dart and it was good to see Ford get up to full speed and go bring it in over his shoulder. It’ll be easy to root for Ford whenever he’s able to get back on the field after he’s recovered from multiple knee injuries.

The young safeties got a lot of work today and they continue to rep at cornerback as well. Today, both Anthony Beavers Jr. and Gordon took reps at cornerback. Calen Bullock has played cornerback this spring as well.

With diminished numbers at wide receiver and cornerback, position coaches Keary Colbert and Donte Williams jumped into the mix during one-on-ones. Colbert, wearing Bru McCoy’s No. 4 jersey and a helmet, squared up with Chase Williams and tried to get deep on him but the pass fell incomplete. Donte Williams went against K.D. Nixon, who went straight at him on a deep route and connected. Colbert went again, this time against Steele. It looked like Steele might have an interception but the ball looked to tip through his hands and Colbert made the catch, immediately spiking the ball off of Steele in celebration.