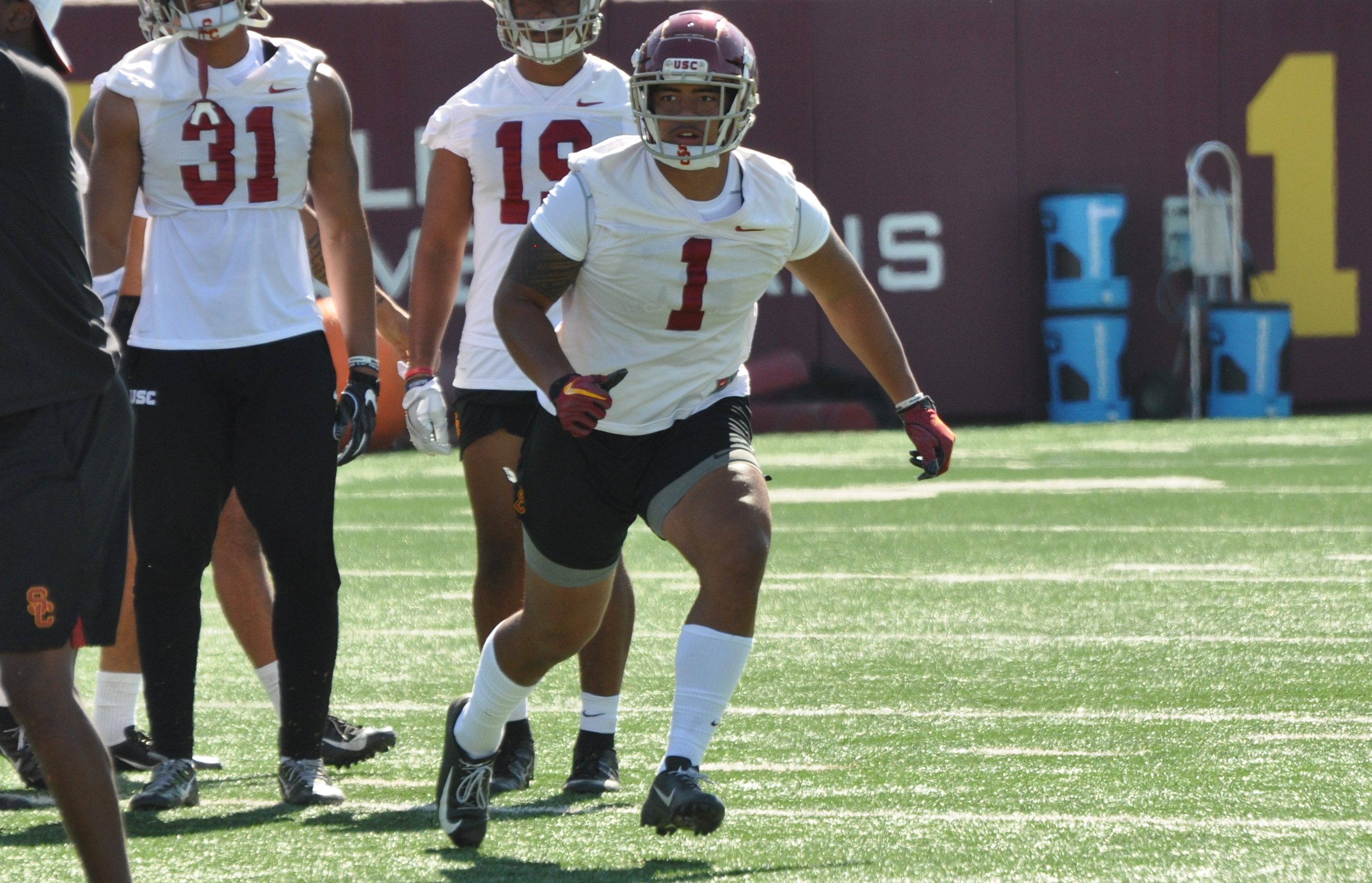 The No. 24 and undefeated USC Trojans (2-0, 1-0 Pac-12) began preparation for the BYU Cougars (1-1) on Tuesday afternoon by being in full practice uniform, meaning pads and helmets.

The weather certainly was advantageous with the temperature in the mid-70s with a cool breeze, which seemed to put a bounce in the team’s step. Of course, it doesn’t hurt to return to practice after a rousing 45-20 rout of the Stanford Cardinal last Saturday night in the Coliseum.

As the Trojans came through Goux Gate and onto Howard Jones/Brian Kennedy Fields, the team was all smiles and appeared to be loose and looking forward to the challenge at BYU.

Since the Trojans are on the road this week, the offense was in the white jerseys and the defense in red jerseys.

There was a large assemblage of TV trucks present for Tuesday’s practice, hoping to get comments from Trojans’ head coach Clay Helton regarding the resignation of former athletic director Lynn Swann.

In the small window of time the media is allowed to view practice, Trojans’ punter Ben Griffiths was booming punts for both distance and hang time. Much has been made how Ben’s punting in practice doesn’t carry over to games, but the Australian punter appears to be taking orders from special teams coach John Baxter and doing what the coach wants during games.

As expected after practice, Clay Helton immediately addressed both his thoughts on the departure of former AD Lynn Swann and shared a phone conversation he had with new USC President Carol Folt.

Helton opened his post-practice session by saying, “I know everybody is going to ask me about the athletic director position, so I am going to knock that out so we can talk football later.

Helton then turned the conversation to Dr. Folt.

Helton said, “We’re really, really excited to have Dr. Folt here and what’s she’s doing right now across campus. Anytime you have change in leadership, there’s transition and changes in other positions. It’s just a natural occurrence. We have utter faith in Dr. Folt, and she’s going to bring a great AD, one that’s going to be great for this university and great for this athletic program.

“What can we do as a coach and a football team? Win, that’s our job. To win and have great success on and off the field and represent the tradition of excellence that is USC. That’s our job, and that’s what we’ll continue to do here.

“I can’t tell you tell you how excited I was to receive a call from Dr. Folt, she didn’t have to do that. To take the time to reach out to me and say, ‘Coach, I love what you’re doing, the staff, the players, it was so fun to watch last Saturday. I want to help you in any way that you and your team can be successful. That meant a ton to me.”

Helton went on to praise quarterback Kedon Slovis, saying that the true freshman knew how to not only deal with his teammates but the situation on Saturday night overall.

The coach went on to say this team has a chip on its shoulder, and there is a different attitude this season. Helton said a great deal of effort was put into the off-season to bond the team together.

Helton did not go into any analysis of upcoming opponent BYU.

Quarterback Kedon Slovis was made available to the media and discussed among other things his excitement about playing on the road, how he got his first name, and his late grandfather, who had his own rooting interest.

Asked first about the BYU defense, Slovis said he didn’t have to worry about it because Coach Harrell was putting together a great game plan and he doesn’t have to focus on it.

Thinking about playing in his first road game. Slovis said, “I am excited. I’ve never played at the college level in an away stadium. It should be a lot of fun.”

Kedon also revealed how he got his first name. The talented freshman QB said, “My mom and dad, Max and Lisa, really wanted to name their kid something unique and they came up with Kedon. Not much to it. It’s not a cross between two names. They just wanted something unique.”

The signal caller also confirmed that his late grandfather, Thomas, was a big Michigan fan, having had season tickets for Wolverine games for some 50 years.

Asked how his late grandfather would like him playing for USC, Kedon said, “He’d get a kick out of it. He’d think it’s pretty cool.”

Trojans starting offensive left tackle Austin Jackson was also available to the media and gave his assessment of the defensive front for BYU.