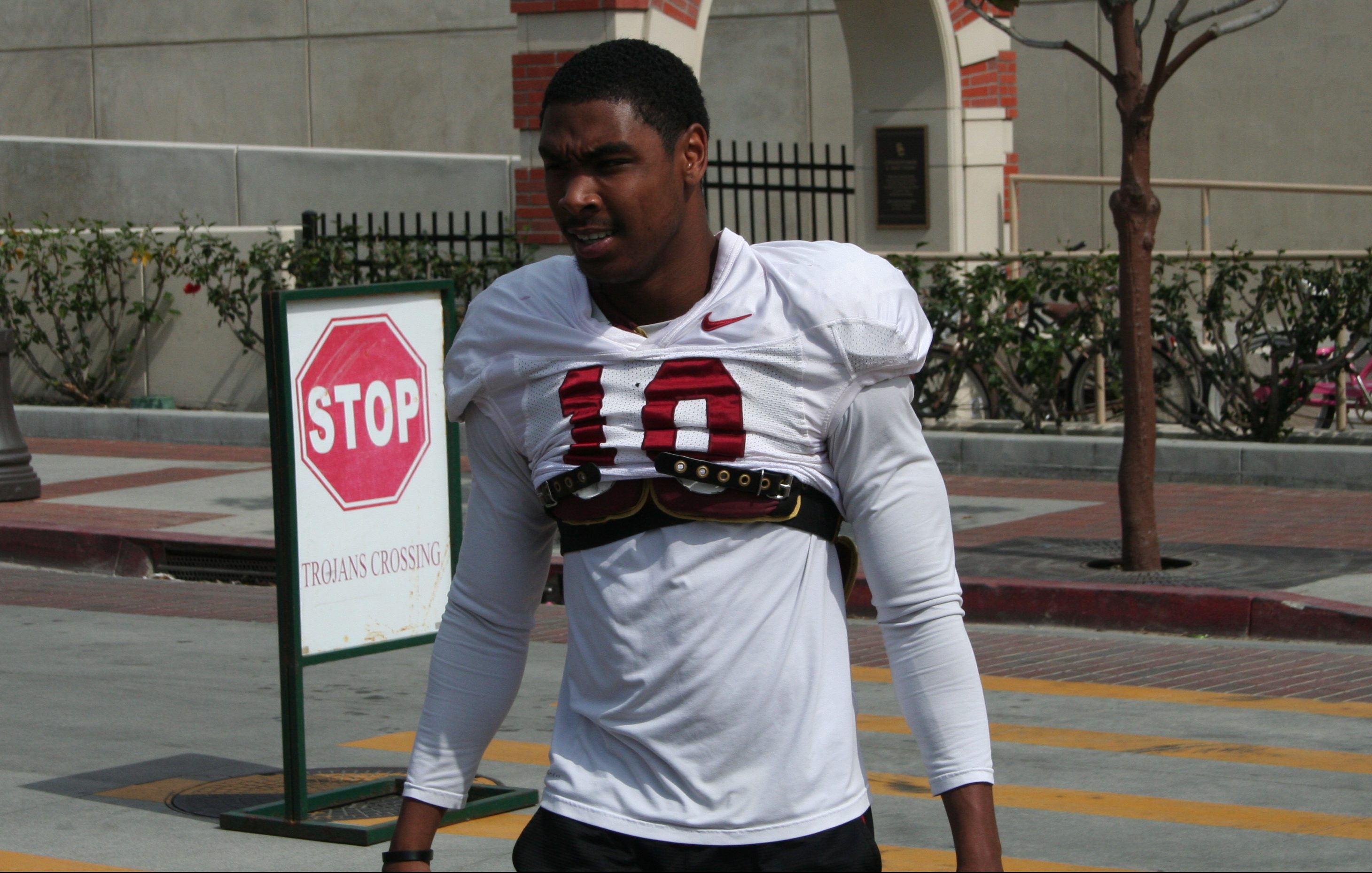 The USC Trojans hit the field in full pads for Tuesday’s practice, as the running game took center stage for chunks at a time and the offensive line delivered a strong performance.

It was a solid showing that carried over from the last time the group was in full pads, for the scrimmage this past Saturday. Offensive coordinator Graham Harrell said he came away from the scrimmage impressed with the running game.

“I thought we ran the ball really well,” Harrell said. “We protected well, too, but what I’m most excited about is probably the way we ran the football. They did a good job…To me, you’re a good run team if you can run when you have to run the ball and we did a good job of that.”

That was a point of emphasis on Tuesday as well, as the team took the field for two four-minute drills, where the offense is tasked with grinding out a first down in order to drain the clock and preserve a win.

Matt Fink led the first team to a first down, while Kedon Slovis moved the chains with the second unit.

USC Trojans radio sideline reporter John Jackson II was in attendance for the first time since he suffered a stroke last December. Jackson was greeted by members of the media and received a warm embrace from head coach Clay Helton. Simply put, it was great to see JJ back on the practice field.

Today was the first time we saw some rearranging of the offensive line, as Jalen McKenzie slid over to right guard with Drew Richmond at right tackle. Andrew Vorhees played some right tackle, and Liam Douglass spent some time at left tackle. Offensive line coach Tim Drevno chalked it up to cross training at two spots in order to continue building depth across the line.

While this was not a full contact practice throughout the two-plus hours, the Trojans did get in a couple physical periods with live tackling—the four-minute drills and some 9-on-7.

We saw the linebackers and running backs square up in a blitz pick up drill again, with this time the running backs looking like they got the better of things. Quincy Jountti and Stephen Carr both did well to hold off Palaie Gaoteote, while Carr stopped John Houston (Houston got him back later with a strong rush right at him), and Markese Stepp showed well against Tuasivi Nomura. It is by no means flawless from the running backs, but they looked much improved today.

Chase McGrath and Michael Brown took turns kicking field goals, with McGrath hitting twice from what looked to be 50-yards. Earlier, he was good from 42, and missed from 45. Brown made one from 45 yards out.

Players hit the 9-on-7 period hard, as it seemed to bounce back and forth between live tackling and thud. The first play was established as a third-and-one situation. Stephen Carr received a lot of work during this drill, and took the first carry right behind Alijah Vera-Tucker for a first down, then went back up the middle for positive yards on the next play.

With the first-team offense going against the second-team defense, Carr found a huge hole up the middle, and then bounced outside and was able to get the corner. Going with the second-team offense against the first-team defense, Carr showed his suddenness by coming to a full stop, then hitting a spin move around a defender to get outside for positive yards. Carr continues to impress this fall and looks to be all the way back.

John Houston had a nice pop on a running back with the first units going against each other, and Hunter Echols raced all the way across the line to bring down a ball carrier. Isaiah Pola-Mao got in on the action with a hard hit of his own.

During one-on-ones with the wide receivers and cornerbacks, Amon-Ra St. Brown continues to show the improvement that could make him the most dangerous wide receiver on the team. He hauled in a touchdown that he juggled with one hand before bringing in, then caught another touchdown while fighting against a cornerback that was flagged for pass interference.

Drake London had another highlight reel catch, which actually had Olaijah Griffin celebrating with him.

Velus Jones got deep for a touchdown, as he continues to show real improvement as an all-around wide receiver this fall.

Matt Fink was up first with the starters in the four-minute drills, as Carr was able to spin away from Pola-Mao at the line of scrimmage, but was cut down almost immediately by a tough tackle from Talanoa Hufanga.

Pola-Mao got some revenge on the next play, as he and a second defender chased Carr down and forced a fumble, though someone on the defense drew a flag for a facemask.

Fink eventually picked up the first down to win the drive by hitting Erik Krommenhoek just out of the reach of a diving Ralen Goforth.

Kedon Slovis led the second unit out and simply handed the ball off to Markese Stepp, who exploded over the left side for an easy first down. Later, Chase Williams made a nice play to trip Stepp up before he could really get moving, but Jountti picked up the first down on the following play.

Practice then shifted into thud only, as JT Daniels got his turn with the ones and was promptly intercepted. Houston made a terrific play to get his hands on a ball as it was arriving to Krommenhoek, knocking it into the air. Cornerback Isaac Taylor-Stuart was able to complete the play with a diving interception.

Daniels then fired incomplete to St. Brown, and had another incompletion with Houston right in his face. This was arguably Daniels’ least impressive practice of spring ball and fall camp, as he just couldn’t seem to get anything going for any extended amount of time.

Fink completely four passes with the second unit against the second defense. This was a good day for Fink, who probably had the two most impressive throws of the day during 7-on-7 work, as he hit Michael Pittman down the sideline between two defenders (a game situation with a safety able to make the hit might have resulted in a different ending), and then found Josh Falo on a great throw and catch that beat very good coverage from Chase Williams.

Pittman and Velus Jones both turned short catches into long touchdowns, while Amon-Ra St. Brown likely had the easiest score of his career, when Kedon Slovis found him over the middle against a busted coverage, where St. Brown didn’t have a defender within 20 yards of him.

On his final drive, Daniels bounced back after being sacked by Drake Jackson to find Drake London with a quick pass. Hufanga went for the pass breakup, but when he missed, London was free to take off downfield for a long touchdown.

Overall, this felt like the most disjointed the passing game has been throughout fall camp. There were more incompletions and dropped passes than we’ve seen in most other practices combined. It wouldn’t be surprising to see the offense bounce back during Wednesday’s practice