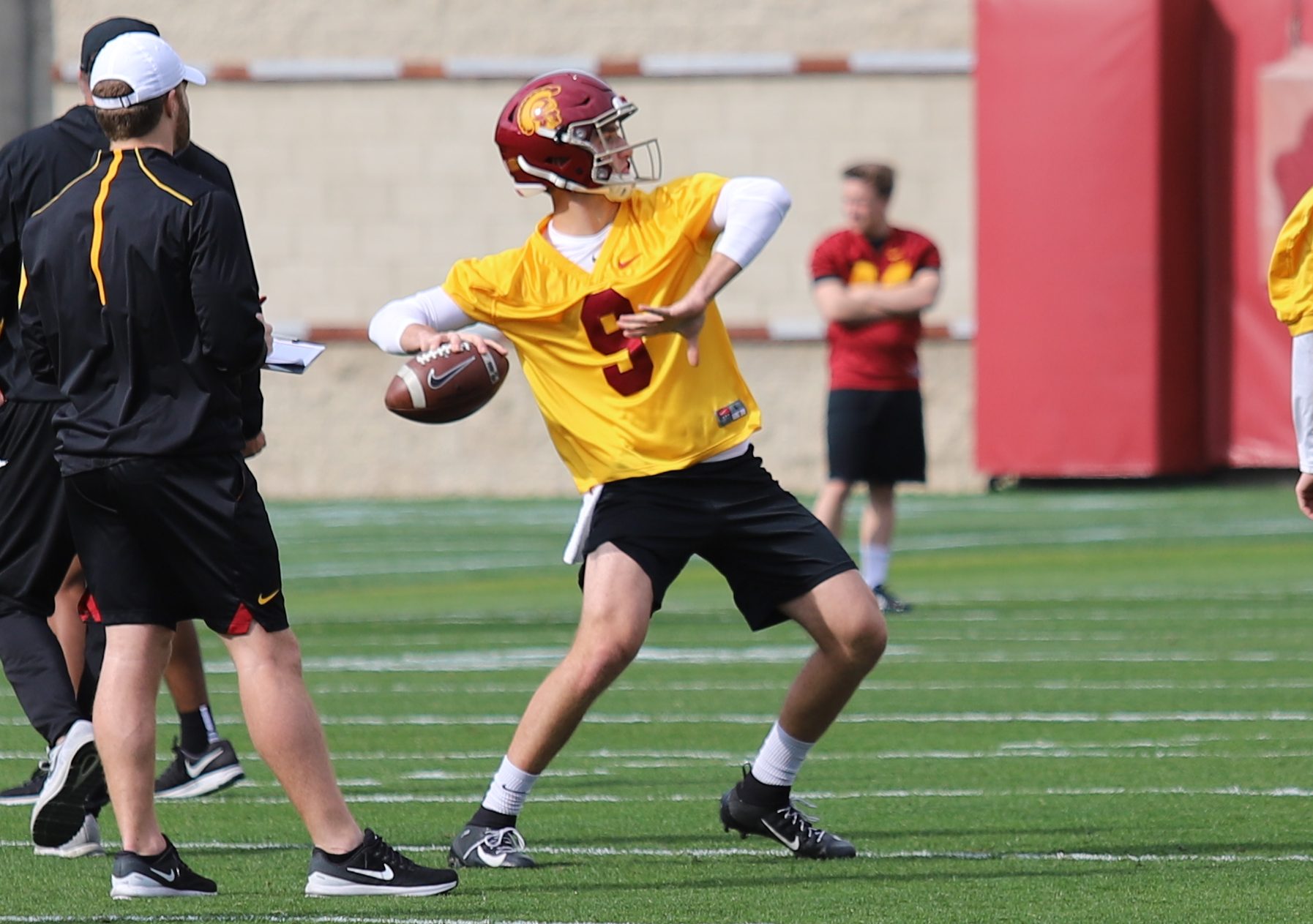 The USC Trojans returned to Howard Jones/Brian Kennedy Field on Tuesday with a helmet and shorts practice under blustery conditions.

The quarterbacks continue to duel, as each has taken his turn looking like the potential starter, and perhaps no player on the roster has put together a more eye-opening spring, regardless of position, than true freshman Kedon Slovis. While other players have perhaps played at a higher level, few have done so when the expectation was for them to take a backseat to the real battle for a starting spot, especially at such an important position.

“It’s great to be around so many great athletes and get out here and compete,” Slovis said. “It’s all been a lot of fun.”

Slovis said adjusting to the speed of his receivers has been one of the difficulties this spring.

“You’re throwing to a lot of guys that are great athletes and faster than anyone I’ve ever thrown to before,” he said.

Coming in as a spring enrollee has been a massive advantage for quarterbacks in the past, as getting accustomed to the college game, as well as just college in general, can be a huge plus for an early enrollee once fall camp rolls around.

“It’s different for sure,” Slovis said of being at USC right now as opposed to still in high school. “All my friends are still back home in Arizona, but I’m really glad I did it. It’s great to get classes out of the way and really get on the field and learn from Coach. I can’t imagine what would happen if I came in the fall and dint’ have the entire spring to prepare for this.”

Slovis was coached by Hall of Fame quarterback Kurt Warner in high school, and said his advice this spring has been to that point.

“Just play ball,” Slovis said of what Warner has told him. “Don’t worry about the competition too much and just do your thing.”

Slovis also praised his fellow quarterbacks for bringing him along quickly.

“They’ve all been really great,” he said of JT Daniels, Jack Sears, and Matt Fink. “IN terms of taking me under their wing and showing me the ropes. I know Jack came in early himself, so he knows what it’s like to be the new kid. Hats off to them for being great teammates.”

It seems to be so far, so good for Slovis, who has certainly made a few true freshman mistakes with interceptions, but has also played far above what was perhaps expected of him by USC fans this early in his career.

“I’m really happy just being an early enrollee and coming out here and just playing,” Slovis said, adding that he’s received some advice from offensive coordinator Graham Harrell as well.

“Keep doing what I’m doing and keep learning as a freshman,” Slovis said of the message from Harrell. “Really emerge as a leader to the older guys.”

The Trojans welcomed presumptive starting offensive tackles Austin Jackson and Jalen McKenzie back to the lineup after both missed the spring showcase on Saturday. Clayton Bradley also suited up and went through some individual drills. Josh Falo was back from an AC issue that kept him out for several practices. Max Williams continues to get more and more work, doing some conditioning and taking part in a drill or two as he rehabs from his knee injury. Jude Wolfe remained out, and was joined by Gino Quinones.

It was a fairly quick practice today, as the final week of spring ball got underway.

JT Daniels was intercepted by Greg Johnson on a pass that looked catchable by Tyler Vaughns, but was high and bounced off his hands.

Jack Sears was intercepted by Isaiah Pola-Mao on a terrific play by the safety, who undercut the receiver heading toward the sideline to come away with the ball. Both interceptions happed during 7-on-7 drills.

Kedon Slovis had a nice completion to John Jackson III, as he dropped a ball in between Dominic Davis and Jordan McMillan. It was a ball that looked like it would be picked off or deflected, but somehow found its way into Jackson’s arms.

JT Daniels threw a pretty pass to Erik Krommenhoek, but the big tight end couldn’t quite come down with it as he was running down the field. The two came back on the very next play for a short completion.

Matt Fink took over the offense during 11-on-11 work and was moving it down the field, but just overthrew Amon-Ra St. Brown on what could have been a deep touchdown, then had a pass batted down by Christian Rector at the line to stall the drive.

Without pads and the linemen not quite going full speed, it was difficult to tell which plays would truly have been extended and which ones likely would have resulted in a sack. Still, Jack Sears had a nice play where he bought some time and found Jackson for a touchdown.

Slovis had a similar play to find St. Brown in the endzone.

The loudest cheers of the day came when grad assistant Michael Hutchins went up high along the sidelines to intercept a pass that was thrown away. He received some cheers from the defensive players.