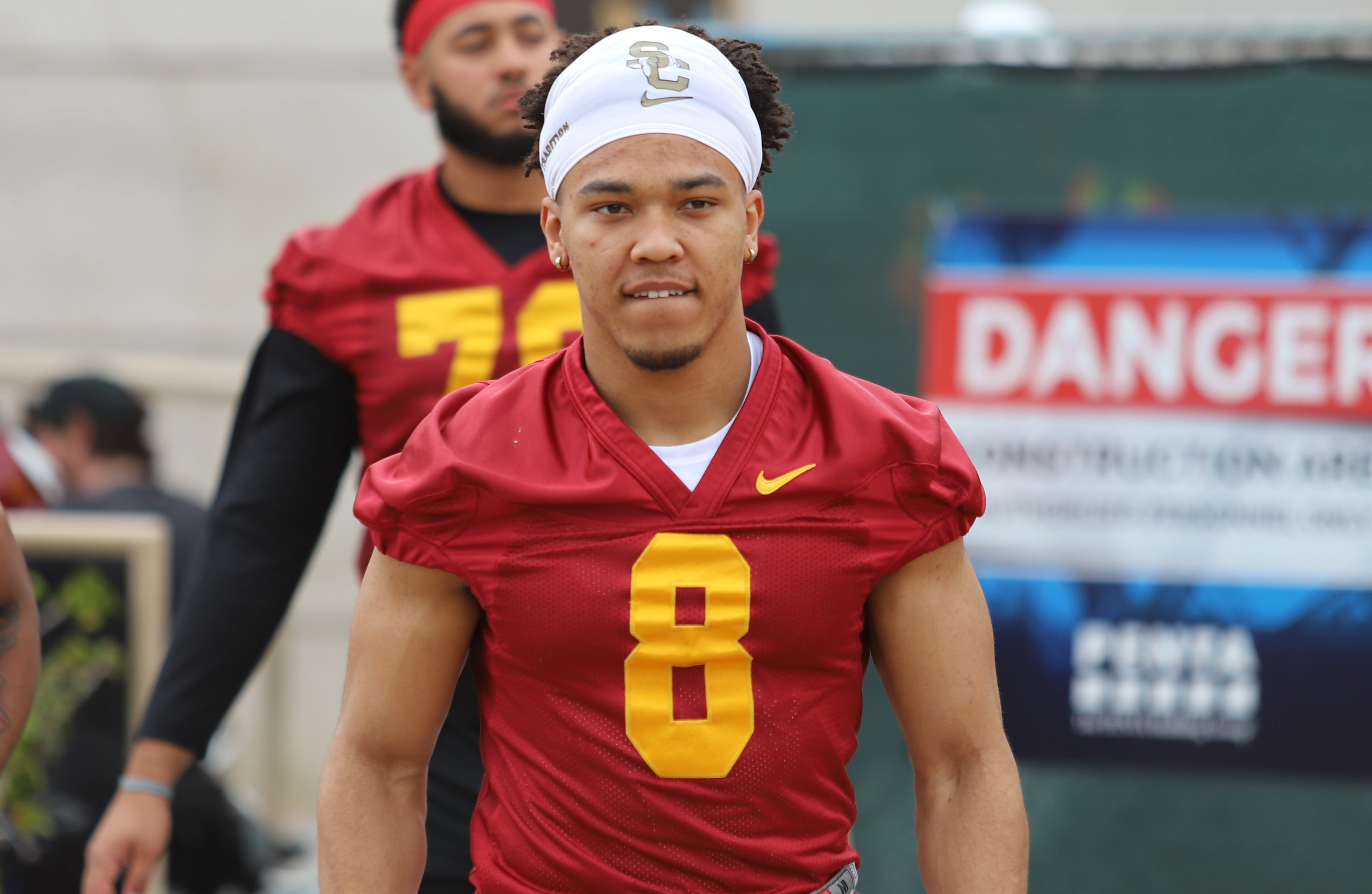 The USC Trojans were back out in full force on Tuesday, as the defense turned it up a notch, the quarterbacks were put in tough situations, and a certain wide receiver looks unstoppable.

Although the Trojans were only out in helmets and shoulder pads, that did not take away from the physicality and the seriousness of Tuesday’s practice. The overall tone of today’s practice was quick and fast-paced on both sides of the ball. The defense seemed to own the day as the offense was purposely put into tough spots against blitz schemes and man-to-man coverage.

The Trojans started the day off with their normal special teams routine. Punter Ben Griffiths continues to show out while even participating in field goal kicks. Special teams does not seem like a concern heading into the fall season.

The defense had quite a day as they won today’s practice off of Kana’i Mauga’s fumble recovery from the endzone. The defense started the intensity early on as they stuffed the offensive line up in running drills and forced the running back group to bounce around blockers. Overall, the defense didn’t commit many penalties throughout the day, which was one of defensive coordinator Clancy Pendergast’s main areas of focus for spring ball.

The quarterbacks were constantly put under pressure and the results were mixed. The first drill the quarterbacks participated in was 7-on-7 but with personnel on the field holding up blocking pads to simulate the reach of a defensive lineman. This virtual pressure led to some mishaps, as JT Daniels forced a ball to Michael Pittman down the middle, but the play was broken up by multiple players for an incompletion. True freshman Kedon Slovis threw an interception during this drill, to Greg Johnson, attempting to force an out route to Pittman. Matt Fink ran the offense from his own 5-yard line against a blitz package and avoided a safety by throwing it away twice during this drill, while he had no completions. When placed on his own 20, Fink efficiently led the offense down to the opposing redzone.

Only seven wide receivers were on the field today and although wide receiver depth is a big concern heading into the new season, the guys on the field today looked excellent. There were some great grabs by all seven of them, but Amon-Ra St. Brown seems unstoppable when he catches the ball. Being utilized as both a quick pass and down the field target, St. Brown has been limiting his amount of drops per practice and it shows.

Vavae Malepeai had some great plays today as he bullied his way up the middle of the defense for a nice score. He did this twice today.

Matthew Hocum had a great touchdown over Jack Drake on a long route thrown by Daniels to the edge of the endzone.

Pittman stiff-armed his way through two players for a touchdown after a catch from Slovis in the red zone.

John Jackson III had a 30-yard reception down the field from Daniels.

Jack Webster caught a short pass from Fink and turned it into a nice 12-yard gain.

Daniels was intercepted in the red zone by Briton Allen.

Jack Sears had an excellent 30-yard run up the middle while leading his team down the field.

“I think the offense has been playing with a better tempo recently and we’re just making minor improvements.”

“To me, Amon-Ra and Pitt are guys that give you everything they’ve got when they play in there, and we don’t have a ton of receivers and our numbers are probably lower than what you would want to run this offense and try to practice, so we are probably killing them. But when those two are in there, they’re as competitive as I have ever been around. They play as hard as any receiver I have ever been around. I told them my standard that I hold all receivers to from now on has changed because of how hard they go. For Tyler, I think what we do fits him really well and allows him to show us his skills; he understands concepts, how to get open, route running, so those three guys set the tone for the entire team.”