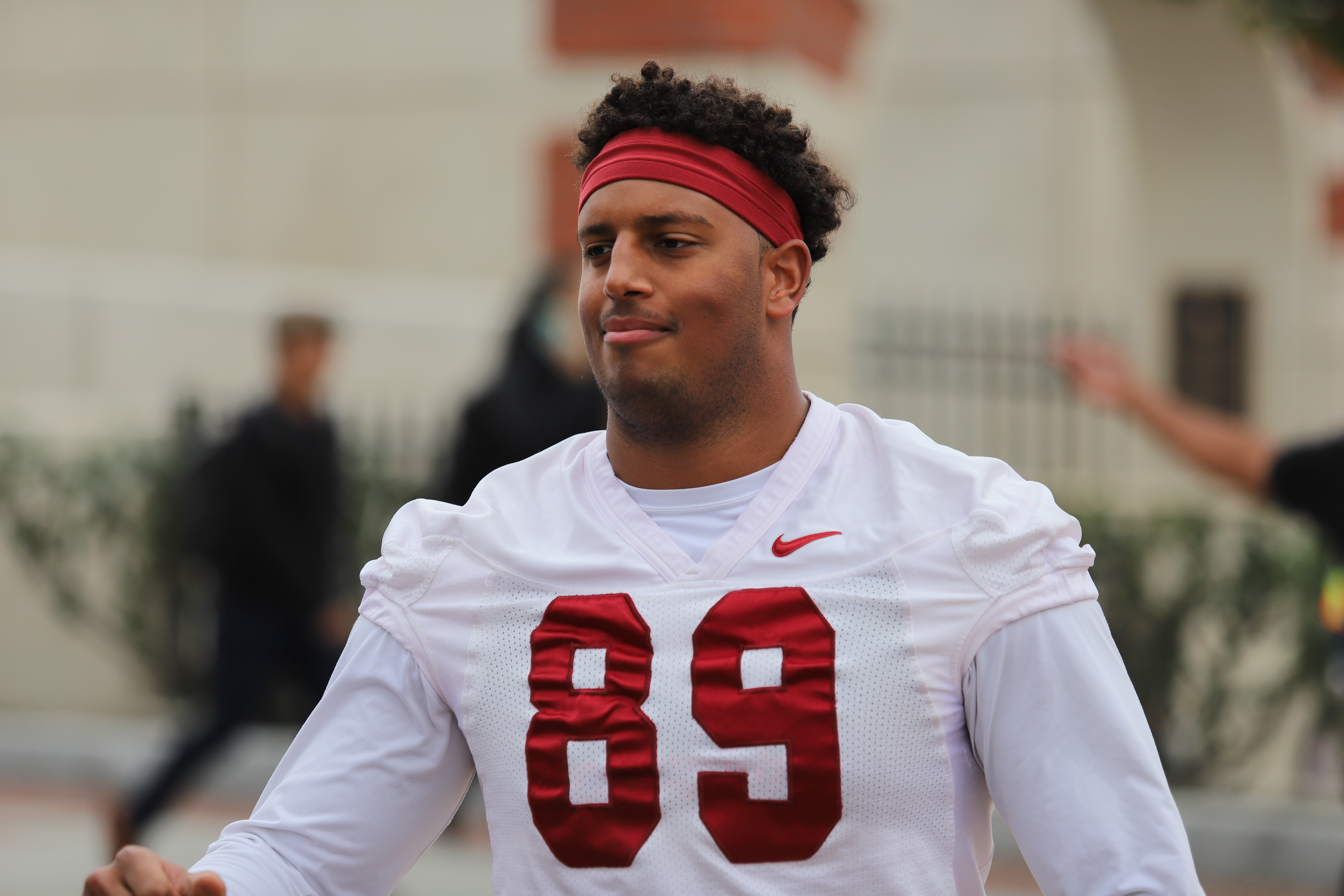 The USC Trojans were back on the practice field Tuesday, as the defense turned in a very good day, Matt Fink stepped up, and Michael Pittman had the catch of the day.

It was helmets and shoulder pads for the Trojans today, though there were some physical moments, with a few collisions and guys being thrown to the ground. Overall, the day went to the defense, as one portion of the team period was almost completely derailed by the front seven, as the offensive line seemed to have trouble against blitz pressure.

There were a number of players sitting out Tuesday’s practice, as Trevor Trout, Solomon Tuliaupupu, Clayton Bradley, and Caleb Tremblay were joined by Jacob Lichtenstein, Brandon Pili, and Jude Wolfe.

Devon Williams went to the sideline during practice and did not return.

Josh Falo received some praise during a special teams drills when he physically manhandled his blocker into the returner.

Palaie Gaoteote had a nice stop on Stephen Carr during run drills. It was good to see Carr back and going through an entire practice.

Markese Stepp continues to impress, as he had a nice run during run drills.

During one-on-ones, Michael Pittman had the catch of the day—and I’m still not sure the physics of it—as he grabbed the ball around the back of Isaiah Pola-Mao as both players were twisting around each other. Pittman came up with the ball, though it was eventually ruled that his foot landed out of bounds.

Chase Williams had a few nice plays today, staring with a pass deflection of a ball intended for Amon-Ra St. Brown. Williams also delivered a hit on Tyler Vaughns and he came through the receiver to bat a pass away late in the day.

Pola-Mao made a nice read on a JT Daniels throw, though he couldn’t come up with the interception.

Christian Rector (photo above) then decided to take practice over, as he had a sack or pressure on three-straight plays. The first was a sack of Daniels. Then he and Abdul-Malik McClain pressured Daniels into an incompletion. The third play, Rector flushed Daniels out to his left and possibly could have sacked him had this been a game situation. But to Daniels’ credit, he rolled left and fired a beautiful ball downfield to Michael Pittman.

Matt Fink then entered as quarterback and was immediately greeted be quick pressure up the middle from Kana’i Mauga. But Fink authored a really nice drive during his time at quarterback, making several quick, decisive throws and moving the offense. It was a really good day for Fink—one of, if not his best of the spring.

During 7-on-7 work, Jack Sears had a nice pass to Pittman.

JT Daniels was bailed out a bit when a cornerback couldn’t quite get his hands on a pass and the ball deflected to John Jackson III for a completion.

During team work to finish practice, Rector and Pittman got a little physical with each other following a play.

Rector then got his hands on a ball at the line of scrimmage to force an incompletion.

John Houston made a really nice play to intercept JT Daniels on a throw in the flat.

Jay Tufele stopped Vavae Malepeai at the line of scrimmage.

The defense put together a quick three-and-out when Sears took over. Hunter Echols had a sack, then Juliano Falaniko combined with Brandon Perdue for a sack, and Falaniko finished the drive by making a nice play to knife through the line on a blitz and bring the running back down in the backfield.