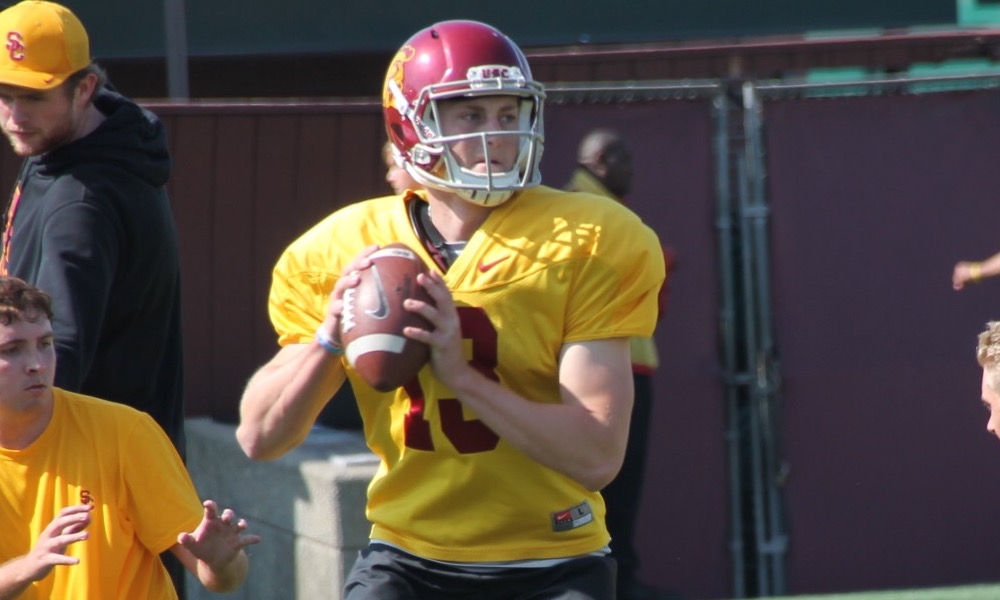 It was a beautiful day on Brian Kennedy-Howard Jones Field as the Trojans began the final two weeks of spring ball and the primary topic remains the play of the quarterbacks.

It’s been well documented that neither quarterback – Matt Fink or Jack Sears – has really separated themselves or made a solid claim to be the lead guy in competition for the starting spot, and there were more struggles today as the defense worked on a lot of blitz packages.

There were some bright spots for the QB’s, Sears zipped a ball along the sidelines to Vaughns, Fink had a nice completion to Trevon Sidney for 10 yards, and both Pittman and Josh Imatorbhebhe extended their long arms to make catches from Sears. Holden Thomas also had a nice TD pass to Vavae Malepeai over the middle.

We also saw a few passes that missed badly as the quarterbacks were under pressure on a blitzes from Cam Smith, Porter Gustin and Christian Rector, among others. Clay Helton said after the practice that Gustin is “unblockable one-on-one right now”.

One of the things that Helton commented on from the scrimmage on Saturday, and which has been true throughout spring, is the lack of deep passing. “We’ve got to get better at deep ball accuracy,” Helton said. “Our eyes got to the right spot but we need to anticipate better. Velus Jones is one guy who keeps popping out to me, he’s showing his speed and he’s getting open, that’s the big thing. The light bulb is going off for him in terms of knowing what he needs to get out of the route, not just running the route.”

Trojan QB coach Bryan Ellis said “It’s on me right now with the quarterbacks, I’ve got to get them to the point where they are making decisions faster, and making plays. We will continue to push them, come out every day and work hard.”

Ellis also said he thinks the QB’s have hit a wall in terms of the playbook installation that has taken place, and Helton said the entire playbook is in so the next two weeks will be rehashing, which should help the QB’s the rest of the way.

Helton talked about the influence of Tim Drevno so far on the offense “We’re going under center a little bit more, using more 22-personnel with two backs. And he can help the RB’s understand the whole run game and how it coordinates with the other parts of the offense. Ced Ware commented to me the other day about how he’s learning about the o-line and how everything works together.”

Other highlights from today included:

* Biggie Marshall got things started on the first play of the team period with a nice PBU on a Fink pass intended for Josh Imatorbhebhe.
* Vavae had two runs in a row, including a nice cutback for extra yardage.
* Sears tried to hit Velus deep but Biggie knocked another one away
* Vavae took a pitch and turned upfield for a nice gain
* Vavae with a 10 yard reception from Fink
* Ajene Harris with a third down pass break up of a Fink pass
* On the final play of the day, Sears tried to hit Josh Falo but the ball was tipped and C.J. Pollard came down with the interception

Chuma Edoga was pulled for a lower back and we saw Clayton Johnston go in his place at right tackle. Jordan Iosefa twisted his knee and Kana’i Mauga took his place.

Among those in attendance were former USC fullback Terry Barnum, and recruits Max and Macen Williams from Serra and QB Bryce Young from Mater Dei.