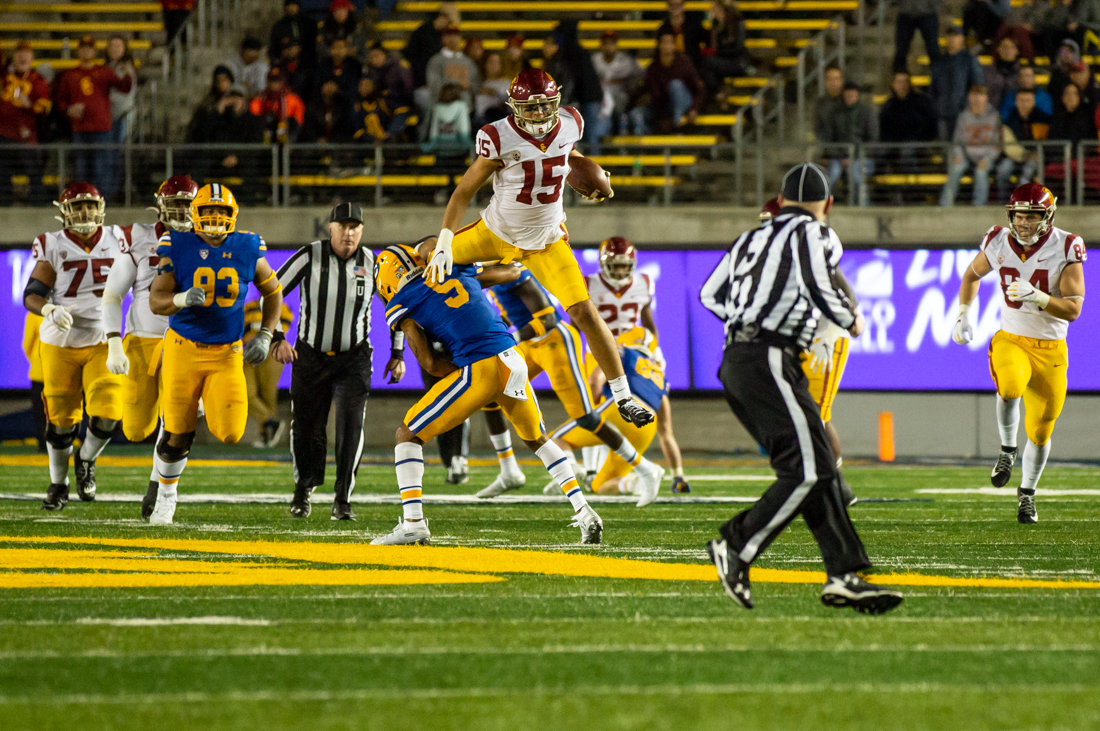 The UCLA Bruins visit the Coliseum this weekend and the Trojans put together a strong practice Tuesday evening in preparation for the Crosstown Showdown.

“I love the prep today, love the energy and focus,” USC head coach Clay Helton said. “I love how this team has grown and gotten better each week.”

The Trojans are riding a two-game road winning streak after suffering their first home loss of the season against Oregon. Now, USC needs to beat UCLA to keep pressure on Utah in the race for the Pac-12 South title. Of course, lining up against the Bruins is all the incentive the Trojans need to turn things up a bit.

“This is special,” Helton said. “We know how important this game is to both fan bases, our community. It’s a special game and we look forward to it each and every year.”

USC players need no reminders of what happened last season, as UCLA won 34-27 behind 313 rushing yards.

“Last year we didn’t get the outcome that we wanted,” said wide receiver Amon-Ra St. Brown. “I think we’re all coming into this week with a little chip on our shoulder wanting to get the outcome we want this year.”

“This is the biggest week of the season,” said offensive lineman Jalen McKenzie. “From the standpoint of university pride, city pride, all that, you’re playing for everything. It’s not just playing another game, it’s UCLA.”

McKenzie said it’s not about playing harder than in any other game, but players look to lock in mentally a bit more because of the importance of this one.

One player who has a little more riding on this one is wide receiver Tyler Vaughns, whose younger brother Jonathan Vaughns recently committed to UCLA to play football and baseball. Vaughns said he hasn’t gotten into it yet with his brother, but he expects that it’s coming.

“I’m going to talk to him tonight to see if we can go back and forth with it,” Vaughns said with a smile. “I know he’s always on my side, but it’s his school at the end of the day, so I know what it is.”

While the Bruins were blown out last weekend at Utah, they’d won three straight games heading into that one, following a 1-5 start to the year. Helton said he loves what Chip Kelly has done with the Bruins of late and that they have really improved behind two “gamebreakers” in quarterback Dorian Thompson-Robinson and tailback Joshua Kelley.

Wide receiver Drake London earned Pac-12 Freshman of the Week honors for his performance against Cal, where he had six receptions for 111 yards and a touchdown. It was his first 100-yard receiving performance and it certainly feels as though it could be the first of many in his USC career.

“He has a skill set I’ve never seen; he’s as good as I’ve ever been around,” offensive coordinator Graham Harrell said. “There’s a lot of talented freshmen out there and very few of them play at the level Drake’s played, especially lately.”

Harrell chalks the performance up to talent, but also the mentality London brings both to the football field and to his position.

“Obviously his talent is exceptionally high,” Harrell said. “I haven’t been around one with his skill set.”

But Harrell actually left the Cal game more impressed with his blocking than receiving, and said that London has actually requested specific plays that allow him to block certain defensive players.

“A lot of talented freshmen that don’t play at his level because they don’t have the same mindset and the same mentality that Drake has, and I think that separates him as a freshman and that’s going to continue to separate him the longer he plays,” Harrell said.

Running back Vavae Malepeai was in full pads and went through the entire practice. Helton said he is still day to day at this point.

Linebacker Palaie Gaoteote looks as though he will remain out this weekend. He did some rehab running work on Tuesday, but Helton said he is “still a little ways off” from returning.

Vaughns was very limited against Cal as he dealt with an ankle injury suffered against Arizona State. He went through about 75% of Tuesday’s practice and Helton said they will continue to ease him along.

Wide receiver Velus Jones sat out practice today and was wearing a boot after suffering a high ankle sprain against Cal.

Center Brett Neilon remains sidelined with his foot in a boot after suffering a calf injury against Arizona State.