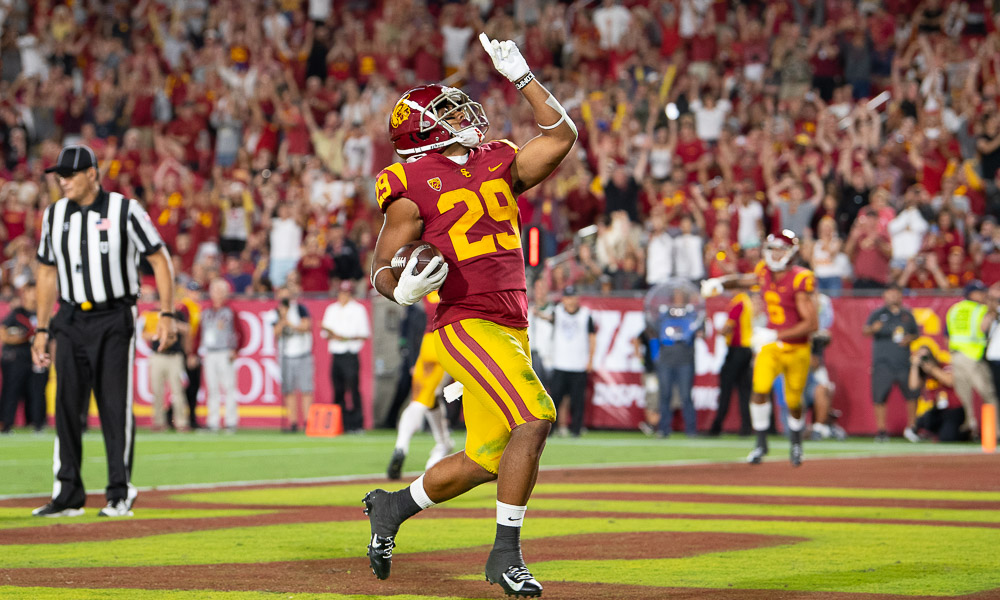 USC might be in line for a bit of good news on the injury front this week, as running backs Vavae Malepeai and Stephen Carr returned to practice on Tuesday.

USC’s running back depth chart has been tested this season, as the Trojans lost Malepeai, Carr and Markese Stepp all for extended time when Malepeai underwent surgery on his knee the same week that Carr and Stepp were injured in a win against Arizona. Recently, the Trojans have relied on true freshman Kenan Christon to carry the load, backed up by former walk-on Quincy Jountti and wide receiver Amon-Ra St. Brown.

Getting the two veterans back this week would provide a huge boost for the USC offense overall, and the running game specifically.

“It’d be nice to have those guys,” offensive coordinator Graham Harrell deadpanned after practice, before breaking into a smile.

Whether the duo will return for USC’s game at Cal still remains to be seen. Malepeai and head coach Clay Helton both said after practice that they would see how the players respond on Wednesday to Tuesday’s full practice in pads. But this was the first real sign that both could be that close to a return to action.

Christon has performed very well in stepping up as the lead back. The plan coming into the season was to redshirt Christon and ease him into four games later in the season. Now, given his workload and his performance, the redshirt plan is scrapped, and he’ll have a healthy dose of responsibilities over the coming games. That being said, the coaches want to be cautious in how many hits he takes, both carrying and catching the ball as well as absorbing hits as a blocker. The Trojans have shied away from leaning on the run game the last three weeks, as Christon isn’t ready to put in 20-25 carries per game.

“Obviously, if you have those other two guys, I think it definitely helps the run game,” Harrell said. “I don’t know if play-wise or schematically you’re going to do anything differently, but you’re probably going to run the ball a little bit more just because you have more guys who can get carries.”

The Cal defense has been fairly good against the run and pass this season, but it presents a strong secondary and getting something on the ground will be important for USC.

“Depth obviously helps at that position and if we can have those two guys back, it just makes the offense that much better.”

Talanoa Hufanga is still wearing a yellow non-contact jersey. He had an interception during scout team work.

Of course, seemingly no practice this season would be complete without at least some negative injury news.

The Trojans will be without center Brett Neilon for “multiple weeks” according to Helton, as Neilon deals with a calf injury that took him out of the Arizona State game. Justin Dedich took over at center and will continue there this week. There are absolutely no concerns from Helton or offensive line coach Tim Drevno about Dedich’s ability to keep things running up front. Jalen McKenzie will serve as the backup center and has some snapping experience from high school. Helton said his snaps looked good today.

Tyler Vaughns went down late with an injury against Arizona State. He tried to go on Tuesday but couldn’t make it through individual drills. He’ll likely be day-to-day this week.

Harrell was asked about the Cal defense (which has given up more than 24 points in just one game this season) and he said the thing that stands out is that all 11 guys are always on the same page. Because there are so few missed assignments, they are able to close windows and tighten gaps, where a defense with a missed assignment would create bigger spaces for wide receivers to work and quarterbacks to throw the ball.

Athletic Director Mike Bohn was in attendance (then made his way over to the men’s basketball game). He spent time speaking with every media member in attendance when he arrived at practice, then talked with injured offensive lineman Liam Jimmons for a while. He said his plan was to engage with every student-athlete on campus and so far he’s delivering. Helton said he’s been to two team meetings already and delivered a congratulations to the team for the win at Arizona State.