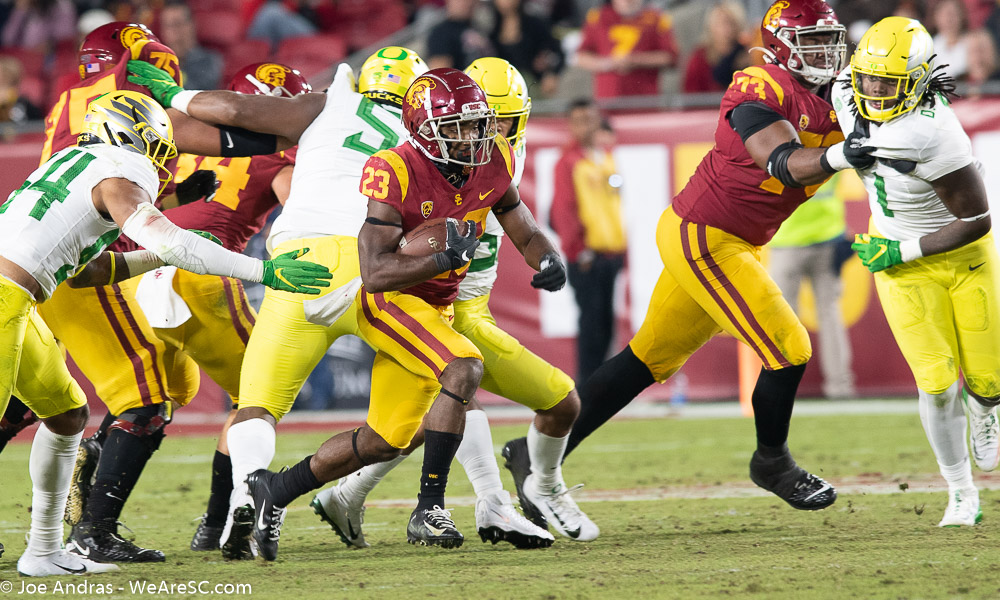 It’s difficult to pinpoint exactly which of the three units should shoulder a bulk of the blame following Saturday’s 56-24 loss to Oregon. The offense turned the ball over four times and turned two possessions inside the 10-yard line into just three points, the defense allowed the Oregon offense to score touchdowns on six-straight possessions, and special teams allowed a 100-yard kickoff return touchdown just before halftime.

On Tuesday, it was the offense and special teams that took their turn reflecting on the performance.

“We got to be more consistent, more than anything,” said offensive coordinator Graham Harrell, mentioning a buzzword he has used repeatedly following virtually every loss this season. “I think that’s kind of been a theme all year. Obviously turnovers hurt, but I think consistency can help with the turnovers, but also across the board.”

Harrell said the offense bounced back well on Tuesday and was moving around fast. The Trojans will head out on the road this weekend, as they’ll face an Arizona State team that ranks second in the conference in turnover margin. That stat will again be one to keep an eye on, after USC quarterback Kedon Slovis turned the ball over four times against Oregon, on three interceptions and a fumble.

“The other night, he had some bad luck a little bit,” Harrell said, referring to an interception on a ball that was batted into the air and another when wide receiver Tyler Vaughns was knocked down. “But at the same time, he’s got to be smart with the ball. That’s the quarterback’s job.”

One area where Slovis has been impressive this season is in his ability to create inside the pocket, keep his eyes downfield and find an open receiver. On USC’s first drive of the game, Slovis improvised long enough in the backfield to find Drake London for a touchdown. But a few drives later, Slovis again looked to buy himself time and was ultimately sacked and fumbled.

Harrell said Slovis has a great feel for space in the pocket and what he needs to be able to get a pass off, but that he needs to develop that same feel when he’s moving around and outside the pocket. Harrell added that he believes that will simply come with reps and experience.

“He has to understand when the ball’s got to come out and when he has to tuck it and take the sack,” Harrell said. “Obviously that was a huge play and a really costly play, but again, you’ve got to let him play. I don’t think you can really handcuff anybody.”

Harrell said he’ll continue to work with Slovis on understanding that sometimes the best result when a play breaks down is to simply take a sack. The challenge is balancing that with not limiting what Slovis is capable of on the field.

“Even on the one where he threw the touchdown, the first thing I say to him is, ‘Hey, great play,’” Harrell said. “‘But understand that was a very dangerous play, especially when you started rolling to the left, when you turn back around the other way, you’re asking for trouble.’”

Slovis was under the microscope against Oregon, as he set a USC record for passing attempts in a game. The Trojans have been without their top three running backs for the past two-plus games, and will rely again on true freshman Kenan Christon and former walk-on Quincy Jountti this weekend at Arizona State.

Asked whether that game was an example of the lack of running back bodies finally caught up with the Trojans, Harrell quickly agreed.

Running backs coach Mike Jinks said the lack of depth hurt a little bit, but he also came away very impressed with Christon’s effort against Oregon.

“I am dang proud,” Jinks said of Christon. “He picked up all his blitzes. He got thrown all over the field, but his job that day was to get run over slowly and he did a good job of it. He impressed the heck out of me, because they were flying around and that’s a good football team, and he didn’t shy away from them. I couldn’t be prouder of him.”

Jinks said there are limitations in the run game, as perhaps one of the bigger guys could have run through an arm tackle down inside the red zone, but that Christon has earned touches with his performance.

The Trojans have put Amon-Ra St. Brown in the backfield and worked some motion touch passes into the gameplan against Oregon, and it appears as though they’ll continue to tinker with getting new additions loaded into the run game going forward, as Christon likely has a 15-20 carry limit due to his size and how the coaches plan to use him.

“We’ve got some thoughts that we’ve been playing with in the middle of the night,” Jinks said. “Some interesting things to stay competitive.”

Given an opportunity to look back at the decision to keep the ball deep with 20 seconds left in the first half, special teams coach John Baxter said performing a squib kick in that situation wouldn’t be his decision.

“In the fan’s playbook, everybody says squib it,” Baxter said. “Certainly there’s a thought, but we don’t squib very well. Maybe a better play would have been a high ball over to the left side or something like that.”

But ultimately, Baxter is comfortable kicking deep in every situation.

“At the end of the day, I guess my basic belief as a coach is I believe in my ability to teach and coach kickoff coverage and I believe in my players’ ability to execute it,” Baxter said. “You can go back in time and watch every play and I don’t think you’ll see a squib kick from us.

“Unfortunately when we ran down the field, we had one player get bumped, and he got bumped pretty hard off his spot, and he got bumped into Ray Scott and Kyle [Ford] and they got bumped off and left a hole. The guy got in the hole and we weren’t able to fill it fast enough.”

Baxter likened the play to bowling, where you can throw the ball one time and get a strike, and throw it the next and be left with a split.

As for what exactly happened, Baxter said: “The boundary corner got blocked, the kicker triggered to the field, the scraper was late and the backside corner was up in the hole and was too slow to get it down. And that’s the formula for a kickoff return goes all the way. Super unfortunate that it happened at that moment.”

As more and more players have missed time due to injury this season, the special teams units have been adversely affected, as players without a lot of experience have been called upon.

“As we’ve had some attrition — we’ve had more and more inexperienced players in the game,” Baxter said. “My job is to coach them and help them. At the end of the day, it’s something we’ve got to clean up and fix and we’re doing that right now.”

USC President Carol L. Folt and Board of Trustees Chair Rick Caruso were in attendance

Safety Talanoa Hufanga and Drake Jackson returned to practice, with Hufanga wearing a yellow non-contact jersey. Neither is fully cleared for the game yet, but head coach Clay Helton said both are progressing toward Saturday and he will have an update as to their availability following Thursday’s practice.

Max Williams is out with a foot injury.

Velus Jones was back home in Alabama due to a death in the family. Helton said he will return to Los Angeles Tuesday night.

This weekend could be the final appearance for Kenan Christon this season. The overall plan is still to redshirt him, but this would be his fourth game. Helton said they are hopeful to get Stephen Carr and Vavae Malepeai back for Cal, which would allow them to sit Christon and preserve his redshirt season. But that is far from a definite plan, since there is no guarantee Carr and Malepeai will be able to return next week.