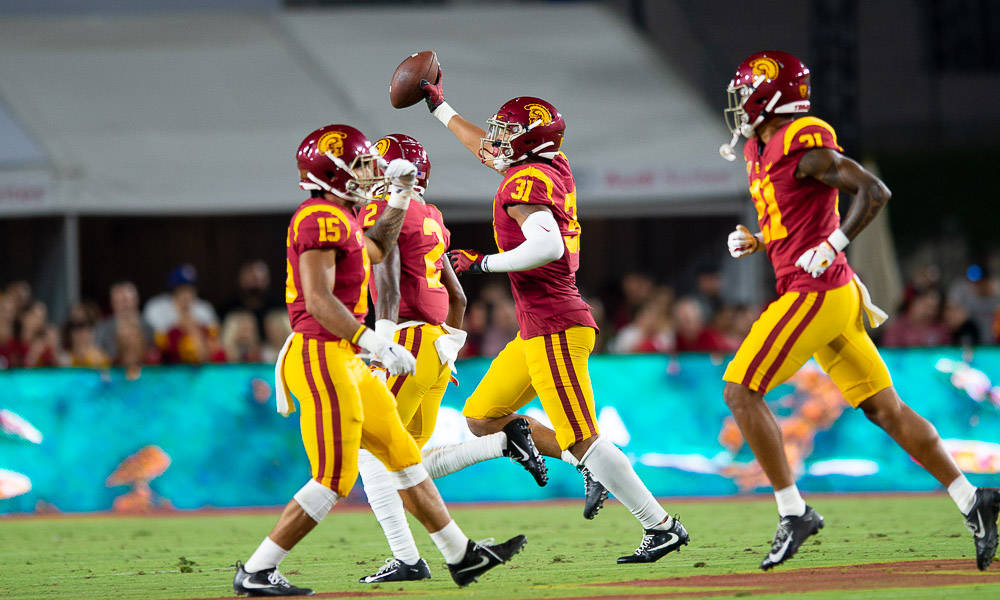 The USC Trojans had their depth tested this past weekend against Arizona in a big 41-14 win. It looks as though they’ll need to pass that same test Friday night at Colorado.

Facing the Wildcats without four defensive starters, and then losing two more during the game, the Trojans pitched a shutout for more than three quarters and completely shut down a potent Arizona offense for long stretches.

Defensive coordinator Clancy Pendergast said there wasn’t really anything special about the game plan going into that contest.

“We’re not really doing anything new when we walk in there Monday and Tuesday and hand them the gameplan,” Pendergast said. “It’s stuff everybody is familiar with…I think the nucleus of that group is really starting to play together and has a good feel for each other. And sometimes it takes time for guys to get on the same page and trust each other. It’s about the time of the season where I kind of figured they would potentially jell…I think they came together and played well, and I was happy with the way they played.”

There won’t be official word until Clay Helton delivers it following Wednesday’s practice, but judging by the sideline on Tuesday, the Trojans are likely to head to Boulder without defensive ends Drake Jackson and Christian Rector, linebackers Palaie Gaoteote and Malik McClain and safety Talanoa Hufanga on that side of the ball.

“It’s a concern, obviously,” Pendergast said of the number of injuries to important players. “The guys have gotten good reps in practice during the week…Whether it’s a starter or a backup, they’re familiar with the calls.”

The defensive line — with the help of outside linebacker Hunter Echols — performed extremely well against Arizona, keeping dynamic quarterback Khalil Tate in the pocket and harassed for much of the game.

Echols said the Trojans spent extra time in practice working on staying in their rush lanes and taking proper angles to the quarterback, not allowing him to step up and through the pocket. With Rector out and an outside linebacker in, the Trojans also had enough speed on the field to chase Tate or backup Grant Gunnell down if they tried to spin outside. Colorado’s Steven Montez doesn’t have the running ability that Tate does, but he’s capable with his legs and can hurt defenses with his scrambling.

Defensive line coach Chad Kauha’aha’a has faced Montez previously, as Montez put up big numbers against his group on the ground.

“We’re going to have the same goals,” Kauha’aha’a said of this week for his line. “We have to contain Montez. He’s not running as much as he used to, but he’s always a threat with that.”

The Trojans also must be aware of wide receiver Laviska Shenault, the most talented player on the Colorado roster and someone capable of lining up all over the field.

“You have to be aware of where he’s at at all times,” Pendergast said, adding that Shenault can get the ball on fly sweeps, in the wildcat or simply as a receiver catching the ball downfield. “There’s a reason he’s going to be a high draft pick receiver when he comes out.”

Kauha’aha’a said the regular run game package for Colorado will provide a test as well.

“They have a big O-line,” he said, adding that Colorado does a very good job in the run game with a line that is a bit different than Arizona. “The run game is not just fly sweep stuff. They run stretch on the edges and they do a good job of pressing the edges.”

The Trojans will continue to feature Jay Tufele and Marlon Tuipulotu inside, with Brandon Pili backing up both of them, while flipping between nose tackle and 3-technique.

On the outside, with Jackson likely sidelined, the Trojans are in line to turn to Caleb Tremblay as a starter. Pendergast said the Arizona game was probably the best game Trembley has played at USC. Nick Figueroa and Connor Murphy are also battling to replace Jackson.

“We keep hearing the word ‘next man up,’ and that’s the truth,” Kauha’aha’a said of playing without his two starting defensive ends. “Right now there’s a battle…Caleb has the lead, but Nick and Connor are pushing him, and those are good football players. I don’t expect it to be a huge drop off. I expect them to know their alignments and assignments, work their technique and we’ll be fine.”

Echols said the team is looking forward to the challenge of playing without some of their defensive leaders, as well as taking on the task of playing a Friday night away game.

“We can’t hang our face because we have some of our best guys out,” he said. “We have to go out there and show we are USC, and at USC we have depth here, and we have to show that depth on Friday.”

Echols and the team are well aware that they are 0-3 on the road this year.

“We know what’s in front of us. We know we control our own destiny. We take every game like it’s the championship game.”

There did not appear to be any changes in the injury status of players.

Tight end Josh Falo practiced again this week. No word yet as to how close he is to returning to the field for a game.

Cornerback Olaijah Griffin and nickelback Greg Johnson both practiced and will be ready to go against Colorado after both missed the Arizona game. Johnson lined up with the first team defense.