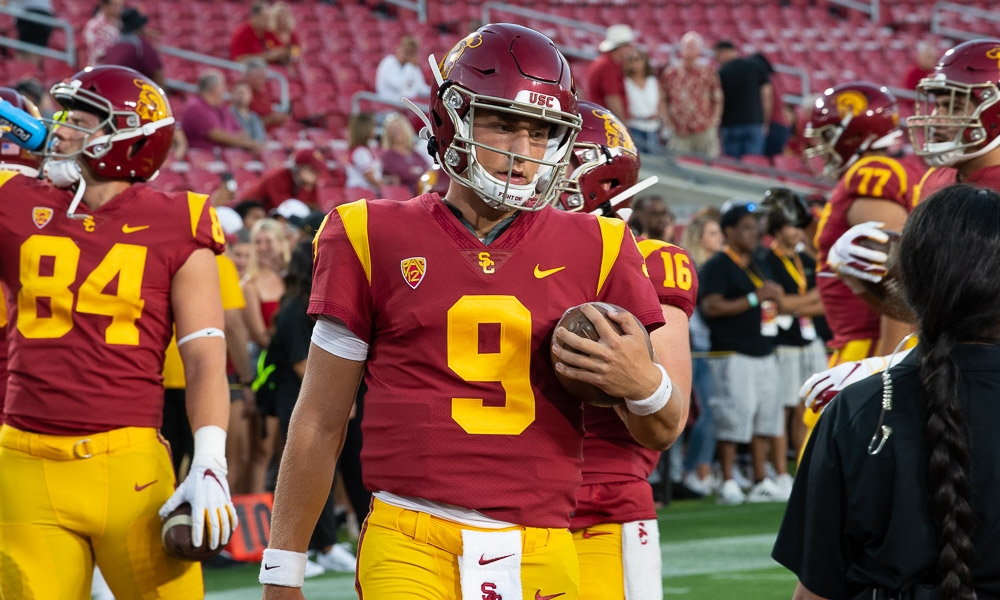 Tuesday marked the first practice of Notre Dame week, as well as the return of two significant contributors, as head coach Clay Helton announced that quarterback Kedon Slovis and safety Talanoa Hufanga are both medically cleared and out of concussion protocol.

Slovis will get the start against Notre Dame. It will be his first start since suffering a concussion on the second play of the Utah game. And it will be his second start on the road, as he previously threw three interceptions in an overtime loss to BYU.

The true freshman quarterback acknowledged the significance of the USC – Notre Dame rivalry and said that a few of the graduate assistance walked him through what the atmosphere will be like in South Bend, Indiana. But Slovis said playing on the road won’t change what he needs to do as a quarterback.

“I don’t think it makes a big difference whether I’m on the road or in the Coliseum,” Slovis said. “Just being disciplined, going through the reads, not letting the last play affect what I do the next time.”

Harrell said there was some rust with Slovis returning after missing so much time due to the concussion, but that he believes his arm feels good after the time off. Now, they have four days to get ready for Notre Dame and his confidence level in Slovis’ ability to be at 100% is high.

“I’m always confident in Kedon,” Harrell said. “I think he’s a heck of a player.”

Harrell reiterated that the moment or atmosphere wasn’t too big for Slovis against BYU, but rather chalked it up to an off day for a true freshman quarterback. He expects Slovis to carry his calm demeanor into Notre Dame Stadium this weekend.

“I expect him to play well and I don’t think the moment or the stage will be too big,” Harrell said.

“Kedon looks good,” Pittman said. “He looks like he’s back.”

Pittman will be making a return trip to South Bend, as he was on the USC team that fell behind 28-0 and wound up losing 49-14 to Notre Dame in 2017. The Trojans committed three first-half turnovers in that game and let the Fighting Irish build momentum right from the first USC offensive play of the game. Pittman said he’s spoken to his teammates about how to keep control in a rivalry game like this.

“We have to brush off mistakes and not feed into the crowd’s energy,” Pittman said.

“There’s not much more you could ask for,” Slovis said. “It’s Notre Dame – USC.”

There is going to be plenty made this week about Pittman’s other quote, as to what else he told younger players about dealing with the weather back in South Bend.

“I told them to embrace the suck,” Pittman said. “It’s going to be cold, but it’ll be fun when we’re running up the score.”

Yes, he said it. But it was pretty obviously a quote that was going to be taken a little bit out of context and used all week by the media in general and likely Notre Dame specifically. It didn’t feel aggressive or braggadocios from Pittman — just something that slipped in when he was finishing a good-natured thought about the weather.

Still, he said it, and it’ll definitely make the rounds in the Notre Dame locker room via Notre Dame media this week. So we’ll see if Pittman and the offense can back it up.

Defensive end Christian Rector (ankle), wide receiver Amon-Ra St. Brown (foot, shoulder) and running back Vavae Malepeai (knee) all returned to practice, as the bye week came at a much-needed time for those players dealing with some nagging injuries.

Middle linebacker Jordan Iosefa looked to go through some individual warmup drills along the sideline with the rest of his teammates, but did not participate in football drills during the portion of practice media is allowed to view. Helton had said before the bye that this could be a target game for Iosefa to return, but was far from sure that would be the case. We’ll see if Iosefa is able to go more fully later in the week.

It was a full pads practice, as game-week Tuesday practices have been all season.

Talanoa Hufanga is medically cleared, but wore a yellow jersey today as a precaution.

Cornerback Olaijah Griffin is getting closer to being ready for the Notre Dame game. Helton said he participated in the last two practices, and if he continues to progress throughout the week, the expectation is that he will be able to play on Saturday.

The starting cornerbacks were Chris Steele and Isaac Taylor-Stuart, with Greg Johnson in at nickel. Defensive backs spent time during the open portion of practice working on fighting through blocks and wrapping up the ball carrier. That’s something defensive backs coach Greg Burns emphasized last week — that he wants the backs to be able to get through a block and make the play, rather than just take on the block.

Asked about Markese Stepp’s role in the offense, Harrell said he doesn’t really anticipate seeing it increase or decrease as the season progresses, simply because of the two guys ahead of him deserving the reps they’re getting. Helton said he’s pleased with Stepp’s performance thus far, and mentioned that his role has increased as the year has gone along. Certainly, Stepp’s performance and usage against Notre Dame will be heavily monitored, as he will be playing in front of plenty of friends and family back in Indiana.