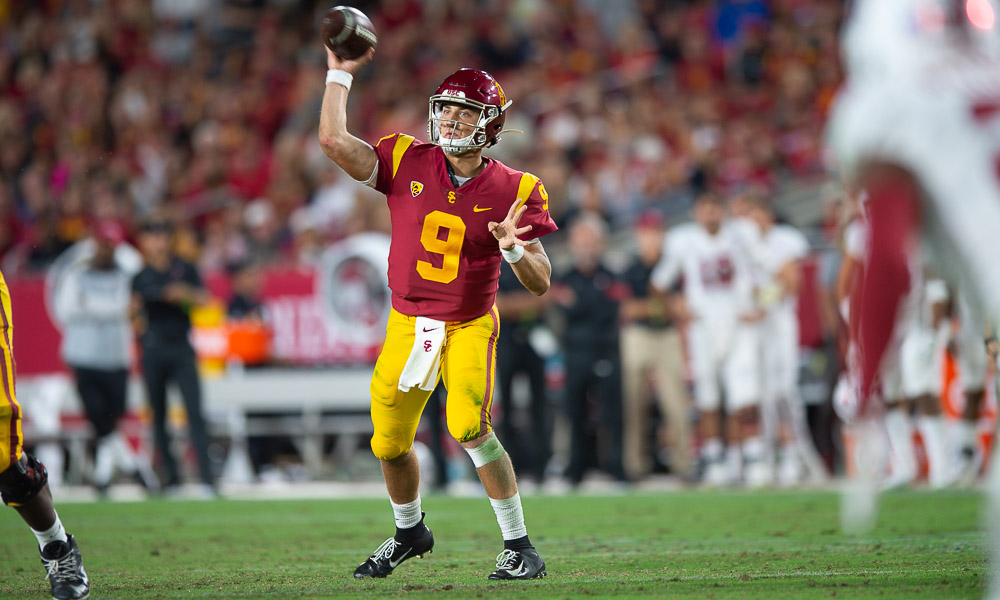 After suffering their second loss of the season this past weekend, the USC Trojans hit the practice field on Tuesday looking to regroup during their bye week. Despite the setback, there was some good news, as quarterback Kedon Slovis and safety Talanoa Hufanga were both cleared to practice after missing the Washington game due to concussions.

Neither player has been cleared for contact yet, according to head coach Clay Helton, but getting them back in the mix for an important road trip to South Bend, Indiana, to take on Notre Dame, is extremely important.

Offensive coordinator Graham Harrell was asked if Slovis would retain his position as the starting quarterback if cleared to play.

“Yeah, I think if Kedon’s healthy,” Harrell said. “We named him No. 2 because he gave us our best chance to win…When he does get healthy, we plan on playing him.”

The Trojans have now played two road games and two different quarterbacks have each thrown three interceptions in those games. Road games at Notre Dame, Colorado, Arizona State and Cal still loom, and Helton said learning from those experiences will help both quarterbacks moving forward.

“Being on the road, they’ve learned, is hard,” Helton said. “There’s a level of decision making and discipline that’s even harder when you’re not in the friendly confines of the Coliseum. For both of them to get that experience? Wow. That’s awesome — just raises their stock as players and helps them grow as players.”

Offensive coordinator Graham Harrell gave his thoughts on his group’s performance against Washington, where the Trojans had 375 total yards, just 163 passing, scored 14 points and turned the ball over three times.

“Every time we got moving it seemed like we turned the ball over,” Harrell said. “To me, the big issues was the turnovers…I think we ran the ball well, we ran the ball fairly often. At times we should have handed the ball off and he threw a little RPO off of it. But, I thought the O-line did a heck of a job and the running backs ran pretty well.

“We just got to take care of the football and I think that solves most of your issues.”

Harrell chalked the turnovers up to poor decision making from the quarterbacks.

“To me, it comes down to making better decisions,” he said. “Hopefully they’ll learn from the mistakes and take care of the football.”

“That’s what I thought,” Harrell said of his expectations coming into the season. “That we could be successful playing any style of football because of the guys we have. They’ve shown that. I think redzone mistakes and turnovers in general…have hurt us at times. Other than that, they’ve moved the ball well and been explosive both running the football and throwing the football.”

Harrell said the interception issue simply comes down to the quarterbacks operating more cleanly in the system.

“It just comes down to: execute,” Harrell said. “There’s nothing you can change. A lot of it has to do with experience, I think. The more live reps you get, the more coverages, the more times you’ve seen a play, the more comfortable you get with it, the more you can execute.

“It’s decision making. You have to be disciplined enough to check down the football and that’s something we’ve talked to him about,” Harrell said.

BYU and Washington both threw similar defensive looks at USC, playing often with three down linemen and dropping eight defenders into man and zone coverages. But Harrell said he doesn’t necessarily believe the Trojans will see that repeated over and over by every upcoming opponent.

“We’ll see,” Harrell said. “I think some people, that’s in their package to do it. There’s some teams, it’s not. If it’s in their package, probably. If it’s not, I wouldn’t think people are just going to try to do something they don’t do, just because you’re not going to have many reps on it. If you’ve never done it and you just go try to do it in a week, the execution is not going to be what it is, compared to if it’s something that you have and that you’ve worked on for years.”

Harrell did say that no matter the defense they see, he does expect teams to play a little deeper in order to take away some of the explosive passing plays USC has been able to hit on this year.

“Whatever they play, we got to go try to execute,” Harrell said, adding again that the quarterback simply needs to be disciplined enough to check the ball down rather than take shots down the field against coverage.

“We’ve got special guys,” he said, referencing a play where Michael Pittman was open shorter than where the ball was thrown. “If you throw it to him, then he’s got 15 yards of space. Good luck tackling him. But you have to be disciplined enough to throw it to that guy. As a quarterback, it can be frustrating at times because you want to take a shot, you want to throw it down the field. Sometimes they’re just not going to allow you to do that. But you can still be explosive by throwing a hitch to Michael Pittman and then asking a 170-pound corner to come tackle him…You have to be disciplined enough to do that, and like I said, I think that’s the answer, is just make wise decisions. If they’re not going to let you throw down the field, don’t throw down the field.”

In addition to Slovis and Hufanga being back on the field, cornerback Olaijah Griffin returned to practice after missing the Washington game with a back injury. Helton said he would expect Griffin to be back for the next game, and that this week will hopefully allow guys who have been playing through injuries to get fully, or at least close to fully, healthy.

Offensive lineman Andrew Vorhees and linebacker Jordan Iosefa continue to sit out. Helton said he hopes the bye week will allow players such as linebackers Malik McClain, Eli’jah Winston and Iosefa to get another step closer to seeing the field this season.

The Trojans practiced without pads on Tuesday, and cut things about 30 minutes shorter than they normally do for a mid-week practice. Harrell called it basically a walkthrough.

For the 20 minutes of practice time that the media is allowed to view, the Trojans worked extensively on situational specials teams plays.