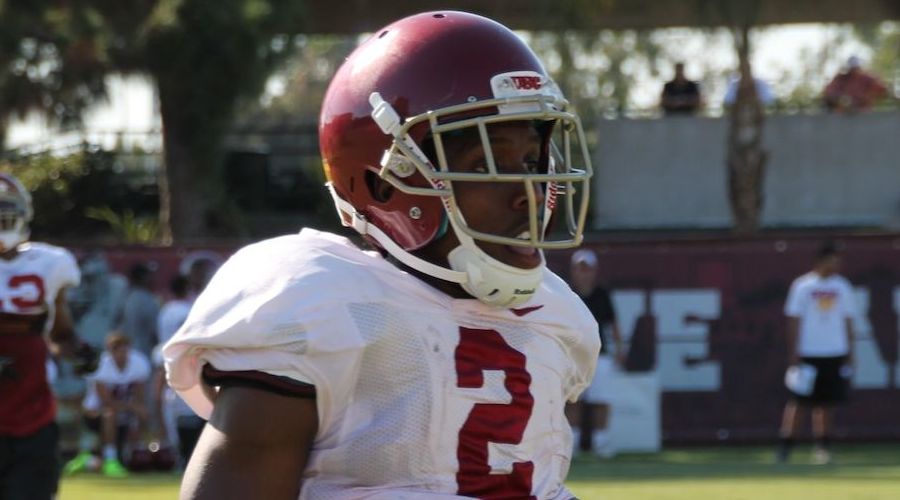 In their first practice session coming off a disappointing loss to Notre Dame, the Trojans came out focused and in positive spirits on ‘Competition Tuesday,’ taking part in a physical, full-pads workout that, with No. 3 Utah coming up on Saturday, had USC interim head coach Clay Helton singing their praises.

The practice, itself, featured plenty of standout plays, including an explosive 35-yard touchdown run by Ronald Jones II, a leaping interception by Iman Marshall during a one-on-one period, and a big-time hit by Quinton Powell delivered to backup punter Scott Tilbey, but the first thing that caught everyone’s attention to start out the day was a new look along the offensive line.

With Chad Wheeler sidelined due to concussion-like symptoms, Zach Banner flipped over from his normal starting right tackle position to left tackle, with freshman Chuma Edoga sliding into Banner’s spot on the right side.

For Banner, a redshirt junior who originally came to USC as a left tackle and lined up there early in his career, the transition back over on Tuesday went off without a hitch, although he did note that there are some slight differences that he had to familiarize himself with again.

“It’s just the footwork, the hand placement, the stance…the sight on the field,” Banner said. “It went really well. I’m just stepping up. I like it.”

Toa Lobendahn continued to line up at center, with Viane Talamaivao at right guard, and Damien Mama at left guard.

Helton said that team doctors will continue to monitor Wheeler.

Jackson spends the day on offense

Another position group impacted significantly by injuries as of late is the Trojans wide receiver corps. And with Steven Mitchell Jr. (ankle), Darreus Rogers (hamstring) and Isaac Whitney (broken clavicle) all sidelined on Tuesday, and Jalen Greene (hamstring) limited, Adoree’ Jackson spent almost the entire day on offense, taking just a few reps at cornerback late in the day.

Jackson, an explosive playmaker, caught an 83-yard touchdown pass against Notre Dame, and he had a productive workout on Tuesday, making a number of plays all over the field. Judging by his workload, there is reason to believe that if some of those injured players don’t return soon, that he could take on a much larger role on the offensive side of the ball against Utah.

“You could tell that we’re a little bit down on wide receivers right now, and you look up in that game and we had to pull a couple guys from the game – Darreus Rogers and Jalen [Greene] – who had hamstring tightness, and we just want to make sure that Adoree’ is totally prepared that, if and when he has to go in, he can help us,” Helton said. “Obviously, he’ll still help us on defense, but he can play a major role for us [on offense]. You can tell, when he touches the ball, everybody holds their breath, and he gives us a great advantage on offense to be able to score.”

Helton said that Greene should be back in the lineup by Saturday.

“Jalen is OK – a little hamstring tightness that we were kind of protective against,” Helton said. “We didn’t want him to pull it or pop it. He felt good today so he came out and did some things. We expect him to play in the game.”

With Jackson spending his time on offense on Tuesday, Kevon Seymour worked with the No. 1 defense at the cornerback spot opposite Marshall for a good portion of the day.

– Linebacker Michael Hutchings, tight end Taylor McNamara and safety John Pattenburg all missed practice due to a stomach bug that Helton said is going around.

– Tailback Tre Madden, who has practiced lightly in recent weeks, continued to do so on Tuesday.

“Any time you have an older guy like Tre that’s played a lot of ball, and has a knee injury that he’s working through, you try to limit him and protect him as much as you can,” Helton said. “You go though a physical game like we did, you’re going to limit him until he can get back 100 percent.”

– Su’a Cravens was involved in a scuffle with James Toland IV during an early hitting drill. Don Hill also got heated at one point during the same period.

– During a field goal period Alex Wood connected on 2 of 3 attempts, and Matt Boermeester was 2-for-2.

– Among those in attendance were Associate Athletic Director J.K. McKay, as well as scout from the San Diego Chargers and St. Louis Rams.

– Jones followed blocks by Edoga and Talamaivao and broke loose for a 35-yard touchdown.

– Aca’Cedric Ware picked up four yards before Osa Masina made the stop.

– Cody Temple and others stopped Ware for no gain.

– Cody Kessler hit Robby Kolanz outside for a gain with Isaiah Langley in coverage.

– Kessler connected over the middle with De’Quan Hampton for a gain of around 20 yards.

– Kessler hit Ware outside for a pick-up of 10 yards.

– Kessler hit Jackson outside for a gain of 11 or 12 yards before Masina made the stop.

– Max Browne connected with Deontay Burnett for a gain of close to 15 yards.

– Browne tried to hit Hampton outside, but Seymour was there to break up the pass.

– Browne tried to hit David Mellstrom, but Marshall broke up the pass.

– Kessler hit JuJu Smith-Schuster over the middle for a gain of over 20 yards before Marvell Tell made the stop.

– Kessler hit Dominic Davis outside, and the freshman showed off his speed, sprinting down the sideline for a gain of over 30 yards.

– Kessler hit a wide-open Hampton outside for a gain of 35 yards.

– Jones weaved his way for a 12 or 13-yard gain before Matt Lopes made the stop.

– Kessler connected with Tyler Petite outside for a gain of eight yards.

– Sam Darnold hit Caleb Wilson outside for a gain of close to 20 yards.

– Jackson ran for a 30-yard-plus gain outside.