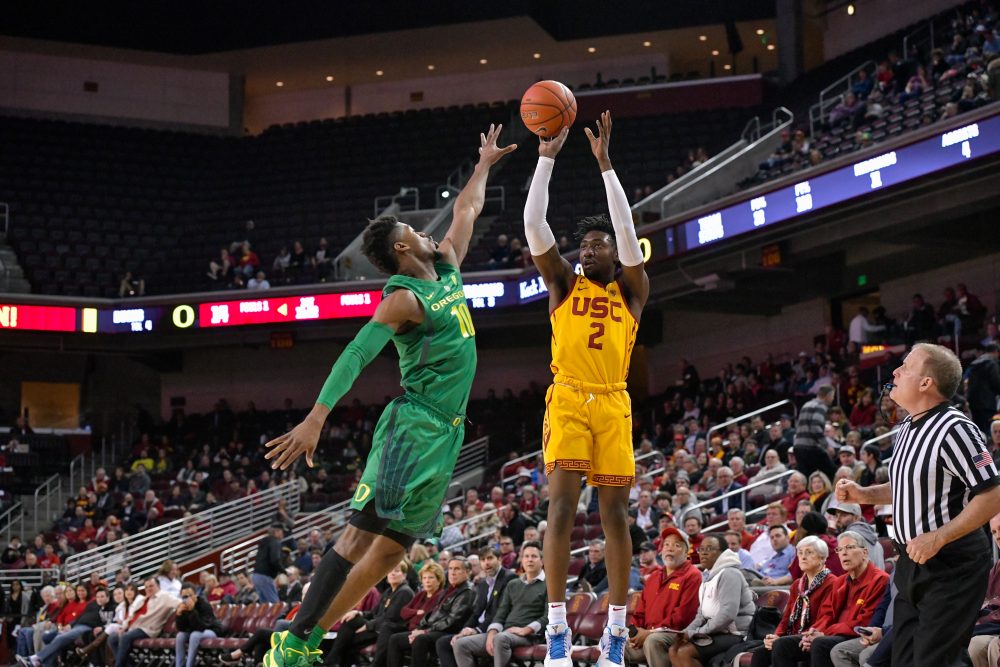 The first place Trojans travel north this week for two big games, and I will be on the trip with the team. These will be difficult games, starting in Eugene on Thursday night at 8:00, and then a quick turnaround in Corvallis on Saturday afternoon at 2:00. The three remaining conference road trips will all be difficult, though this one may be the toughest. Oregon is ranked 12th in this week’s AP poll, and is 16th in the NET ranking. Oregon State’s NET ranking is 67, and USC is 46.

The Trojans are getting very little respect in the national rankings. Surprisingly, SC moved up only five places after the Stanford win to 46 in the NET, and Stanford dropped only five spots to 14. Although neither is ranked in the AP poll, Stanford received 28 votes this week and the Trojans only received 4. SC beat LSU in December, but the Tigers are only two spots outside of the AP top 25 and received 83 votes. The Trojans are the lowest ranked three loss team from a major conference in the NET rankings.

Why are the 15-3 Trojans not getting more national attention? The explanation appears to be that the Trojans were beaten very badly in the losses to Marquette and Washington. Margin of victory or loss is a factor in the NET rankings. Both of these teams have stumbled since beating the Trojans, which also doesn’t help. This week provides an opportunity for the Trojans to get its biggest win so far against the Ducks in Eugene.

Preview Of The Oregon Ducks

The Ducks are a very solid team, led by the potential Pac-12 Player of the Year guard Payton Pritchard. They are 15-4 and 4-2 in conference play, and have played a very difficult schedule. They have beaten several ranked teams including Michigan, Memphis, Seton Hall and Arizona. They lost by 1 in overtime to Gonzaga and by 4 to North Carolina before the Heels’ star point guard Cole Anthony was injured. In conference play, they lost by 9 at Colorado and by 11 at Washington State in their “worst loss.” In their last game, they beat Washington on a late three pointer in overtime.

Dana Altman is in his tenth season as the Ducks’ head coach and has a 13-4 record against SC. Altman may be the best coach and best recruiter in the conference. Oregon had almost a complete roster turnover after last season. The Ducks return only three players who scored last year and one starter in Pritchard. The other returning players are guard Will Richardson and forward Francis Okoro.

Oregon is a very good shooting team. They make 47% of their shots and 38% from three. They are not as good from the line, converting only 67%. Pritchard, the 6’2” point guard, is the key for Oregon with his great all around play. He can control the game, and will have the ball as the clock winds down in close games. He is a very good three point shooter, and very creative when he drives into the lane. He is averaging 19.5 points, 4 rebounds and almost 6 assists, and makes 48% of his shots, 41% from three and 76% from the line. Pritchard is constantly in motion, and is a very difficult player to defend. I expect Jonah to draw the defensive assignment, but he will need help from the bigs when Pritchard drives the lane, and the Trojan bigs will need to alter his shots and limit his ability to make good passes while avoiding fouls. When the Ducks need a big play or a clutch shot, they look to Pritchard.

6’5” sophomore Richardson is averaging almost 10 points and is making 46% of his shots, 42% from three and 84% from the line. 6’9” sophomore Okoro averages only 3 points and three rebounds, but has 15 blocks in limited minutes.

Altman brought in several good transfers, including 6’6” Eugene Omoruyi  who led Rutgers in scoring and was honorable mention All Big 10 last season. Anthony Matters, a 6’4” grad transfer from New Mexico was the top scorer for the Lobos last year, and makes 42% of his shots from three and 81% of his free throws. Matters was a high school teammate of Pritchard’s. 6’6” guard Chris Duarte was the national JC player of the year, and is averaging almost 13 points and 5 1/2 rebounds.

The Ducks also brought in some big freshmen after losing all of their size from last year except Okoro. 6’11” N’Faly Dante is 25-40 from the field, but has not played big minutes. 6’8” Chandler Lawson averages 5 points.

The Ducks play good team defense, holding opponents to 39% from the field and 31% from three. Oregon and it’s opponents have shot approximately the same number of free throws.

Preview Of The Oregon State Beavers

The Beavers are 12-6 but are a disappointing 2-4 in PAC 12 play, though they have two very impressive conference wins, beating Colorado on the road and Arizona by 17 at home. Last weekend they were swept on the road by the Washingtons. The Cougar pair of Isaac Bunton and CJ Elleby combined for 56 against the Beavers. A couple of weeks earlier, the Trojans forced them both into a very poor shooting night in the Trojan win in Pullman. OSU did not play a particularly difficult non conference schedule; the Beavers best non conference win was over Iowa State.

As a team the Beavers are shooting a high 48% from the field, and are 34% from three and 73% from the line. They are led by two very good upper classmen. 6’7”red shirt senior forward Tres Tinkle, Wayne Tinkle’s son, is their leader and an all conference candidate. 6’5” junior guard Ethan Thompson is the son of former Syracuse star and current OSU assistant coach Stephen Thompson.

Limiting Tinkle and Thompson is the key for the Trojans. Tinkle is averaging almost 20 points, 7 rebounds and over 3 1/2 assists. He is making 48% of his shots, 42% from three and 79% from the line. Daniel Utomi is the most likely Trojan to defend Tinkle; he comes closest to matching Tinkle’s size, strength and speed.

Thompson is a big guard and is averaging 16 points, over 4 rebounds and over 4 1/2 assists. He makes 50% of his shots, but is not as good from three, converting 35% from deep. He also makes 76% from the line. Jonah will probably get the defensive assignment on Thompson. Andy has repeatedly said that Jonah is one of the best defensive guards, if not the best, in the conference, and he has guarded taller players in several games. Thompson is not extremely physical and Jonah has a good chance to contain him.

The Beavers best big man is 7’0” senior Kyler Kelly. He averages 11 points and 5 boards, and is making 58% of his shots and 65% of his free throws. Big O and Nick, with help from Isaiah, should have an advantage inside.  The other OSU player having a nice season is 6’5” junior guard Zach Reichie. He averages 8 1/2 points, and shoots 42% from the field. He is not a good three point shooter, making only 29% from deep, but makes a very high 78% from the line.

Pac-12 games on the road are difficult, especially this year when there appears to be such great balance from top to bottom. Most teams have a legitimate chance to finish in the top four and earn a first round bye in the conference tournament. The Trojans cannot have a poor start and get behind by 20 and expect to win on the road. They learned how hard it is to come back from a big deficit before a hostile crowd in Seattle.

Oregon is undefeated at home this season and it will be difficult for the Trojans to get a win in Eugene. If SC can keep Payton Pritchard somewhat under control, they have a chance to pull off the upset. In order to win they must also avoid a slow start which has been a problem in several games, limit their turnovers, and make free throws, and several Trojans need to have good offensive games. Big games from at least two of the Trojan big men, Onyeka, Nick and Isaiah, will likely be needed. The Trojans can get this upset, but many things will need to go right.

The Trojans have a better opportunity for a road win in Corvallis. The path to a win is clearer. If SC can limit Tinkle and Thompson, and control the inside, they have a good chance to win.

A road split would be acceptable, and I think SC will beat OSU. A sweep would be a tremendous accomplishment, and this Trojan team has a shot.

Jonah now has 1204 career points and is tied with Maurice Williams for 25th most points as a Trojan. He is 7 behind Ron Holmes for 24th. Jonah has 217 career threes, and is only one behind the fourth best mark held by Brandon Granville. Nick has tied Ronnie Coleman for sixth most career rebounds with 821. He needs only 18 boards to catch Sam Clancy for third all time.

Look Back At Stanford Win

I’ve watched the last few minutes of regulation and the overtime several times. Even though I know what happened, it’s thrilling each time when the Trojans steal two inbound passes in the final 15 seconds and score 5 points in 8 seconds to force overtime. Elijah Weaver’s off balance three with seconds to go in regulation is SC’s most important shot of the year so far. Elijah then dominated in OT, making a basket in the lane and converting his foul shot, making all three free throws after being fouled on a three point attempt, and sinking a difficult twisting layup with 14 seconds left. That’s 11 points in the final 5 minutes and 10 seconds. Pretty understandable why he was still excited during the post game interview. It was a magical night for Elijah and the Trojans.