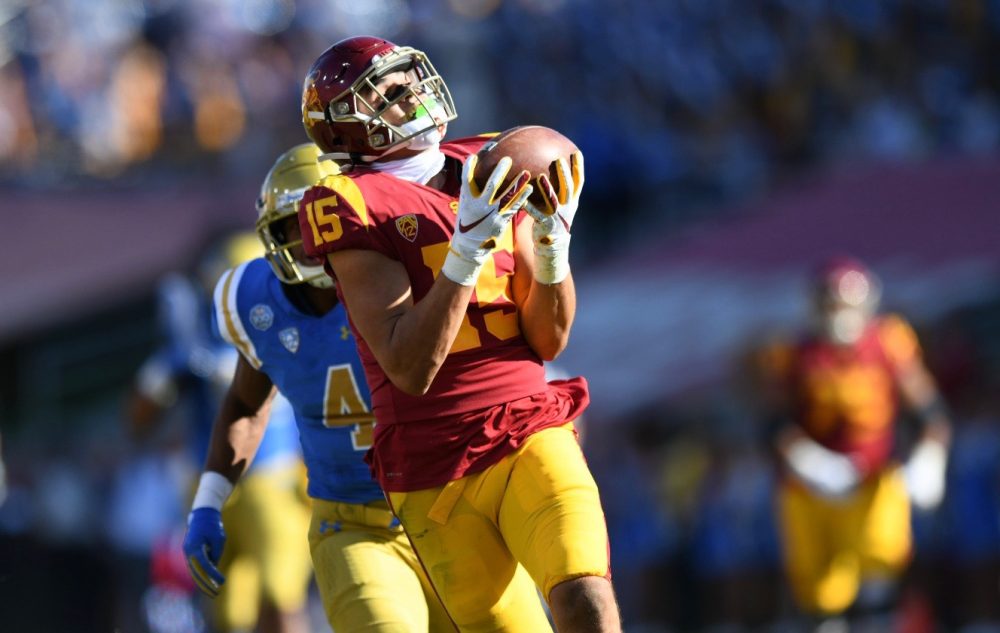 Kedon Slovis put his stamp on the USC-UCLA rivalry, and set a school record in the process, as the Trojans piled up 643 total yards in a 52-35 win against the Bruins on Saturday afternoon.

Slovis threw for 515 yards, breaking Matt Barkley’s single-game USC record of 493 he set against Arizona in 2012. In the process, four USC wide receivers went over the 100-yard receiving mark for the first time in school history, led by Drake London’s eight receptions for 142 yards.

“Obviously it’s an honor to be among that list, but I think it just reflects what the receiving core and the players around me,” Slovis said. “Like Coach [Graham Harrell] said, any of you in here could throw for a couple hundred yards with these receivers. So yeah, it is exciting to put up numbers, but I think I really have a good team around me that makes it happen.”

Pittman is climbing the single-season record lists as well. His 13 receptions give him 95 catches this season, tied with Mike Williams’ 2003 season for the most in one season in USC history. The connection he’s had with Slovis this season is a big reason and he’s come on strong over this latter part of the season. Pittman was asked if he saw this star turn coming for Slovis.

“It’s funny because, no,” Pittman said. “I didn’t see him becoming the new superstar of college football. I will say that his decision making has improved and become more efficient. We weren’t making plays like this earlier this year.”

The offensive explosion covered up for some early special teams and late defensive miscues, as a running into the kicker penalty extended the opening UCLA drive that resulted in a touchdown. USC also muffed a punt late in the first quarter and allowed UCLA quarterback Dorian Thompson-Robinson to throw for 367 yards and three touchdowns, as the Bruins had 540 yards of offensive of their own.

But while UCLA piled up yards late with Thompson-Robinson finding tight end Devin Asiasi for 141 yards, including a 53-yard touchdown, and picking up yards with his legs, Bruins running back Joshua Kelley was never able to get going. Kelley set a record for rushing yards in the USC – UCLA series when he ran for 289 yards last season. He came into this game 61 yards away from hitting the 1,000-yard mark for the season, and the Trojans came into this game with a plan to keep him from getting there.

“Coming in, a real goal was to try to slow down Joshua Kelley because we saw him last year and how dominant he can be in all games,” Helton said. “He’s an NFL running back and was 61 yards away from 1,000 yards and we held him to 45.”

After UCLA was able to jump on top 14-10 with a three-yard touchdown run by Thompson-Robinson early in the second quarter, the Trojans turned things up offensively. Slovis found Michael Pittman for a one-yard touchdown, then went back to Pittman for a four-yard score to take a 24-14 lead into the half. Slovis finished the half with 250 passing yards, and the USC offense was just getting started.

Slovis found London with a 32-yard strike to open the third quarter, then Vavae Malepeai continued to make his mark in his first game back since undergoing knee surgery following the Notre Dame game. Malepeai’s 8-yard touchdown pushed USC’s lead to 38-14 and effectively put the game away.

While UCLA was able to find success against USC’s defense in a big way over the latter part of the third quarter and into the fourth — scoring three-straight touchdowns on drives of 75, 73 and 74 yards — USC matched the final two with a 49-yard touchdown strike from Slovis to Tyler Vaughns and a 2-yard touchdown run by Stephen Carr.

Defensively, Isaac Taylor-Stuart had a big early interception, when he was able to erase a UCLA drive that started by recovering that muffed punt. Talanoa Hufanga recorded 18 tackles including a sack. Isaiah Pola-Mao had 12 tackles and both Kana’i Mauga and Drake Jackson recorded sacks.

The win moves USC to 8-4 this season and makes the next two Utah games must-watch for the Trojans, as a loss by Utah to either Arizona or Colorado will put USC in the Pac-12 championship game against Oregon.

It’s a big recruiting weekend for USC — as the UCLA game always is — and the Trojans have several prospects in for official visits. During his postgame press conference, Helton was asked what his message will be to those recruits.

“That USC is an extremely special place and always will be,” Helton said. “It doesn’t matter if I’m the coach or you’re the coach, USC is always going to be that special place. The foundation is 125 years strong and the people within it are strong, these players are strong, and if you want to come do something special, with some damn good quarterbacks and some good skill and young kids that have a lot of fun, come join us.”