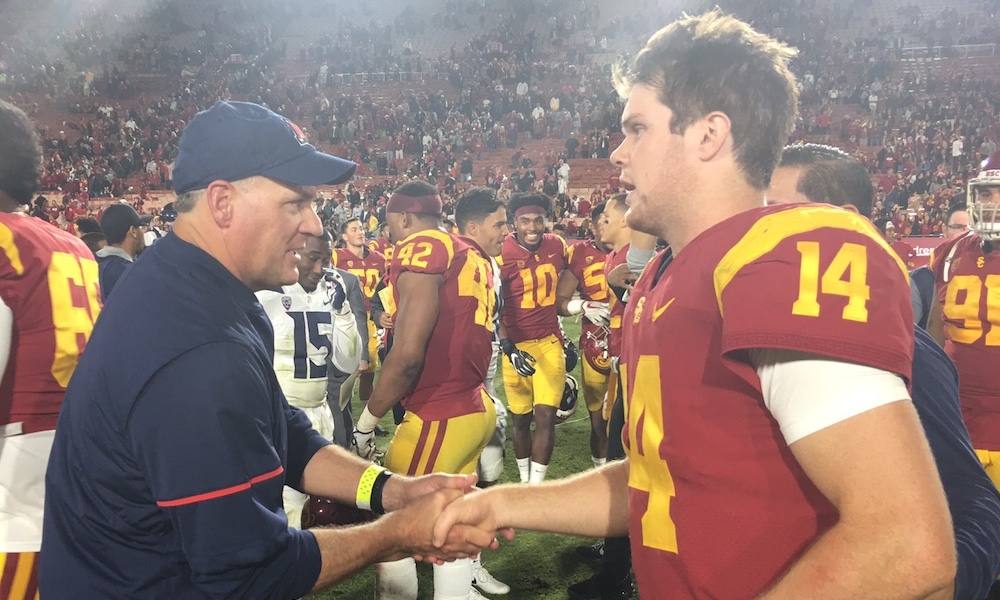 There were numerous times on Saturday night that No. 17 USC (8-2, 6-1 Pac-12) appeared to be on the verge of running away with an easy victory against No. 22 Arizona (6-3, 4-2). But that’s not quite what happened. In fact, up by as many as 22 points in the third quarter, the Trojans allowed Arizona to storm back to tie the game up.

In the end, however, USC did pull it all together when it counted most, scoring two late fourth-quarter touchdowns to come away with a 49-35 victory that puts the Trojans in the driver’s seat in the Pac-12 South race.

The victory featured an outstanding performance by a USC rushing attack that averaged 6.4 yards per carry. Tailback Ronald Jones II rushed for 194 yards and three touchdowns on 27 carries, and Aca’Cedric Ware racked up 122 yards and one touchdown on 14 carries.

It was John Baxter’s special teams unit that drew first blood for the Trojans early in the first quarter, however, when Michael Pittman Jr. blocked Josh Pollack’s punt, with Jalen Greene scooping the ball up at the Wildcats 11-yard-line and darting into the end zone for a touchdown to put USC up 7-0.

The Trojans were on the verge of adding to that lead in a hurry on the team’s next offensive possession as they drove 97 yards on 10 plays, but then Sam Darnold was picked off by Dane Cruikshank in the end zone on a pass attempt from the one-yard-line. On the ensuing drive Arizona drove 53 yards in 11 plays, with Lucas Havrisik converting a 44-yard field goal attempt to make it a 7-3 game in the second quarter.

USC wouldn’t waste any time in responding, however, as the Trojans put together an 11-play, 67-yard drive that was capped by 22-yard touchdown pass from Darnold to Tyler Vaughns.

With momentum on their side, Darnold and Co. drove right down the field on their next possession as well, with the redshirt-sophomore passer connecting with Steven Mitchell for a 27-yard touchdown.

Havrisik would add his second field goal of the night just before the end of the quarter, but USC still held a 21-6 edge at halftime.

After the Trojans defense came up big early in the third quarter by forcing Tate to fumble the ball away, the USC offense put some more points on the board when Jones II ran for a five-yard touchdown to give USC a 28-6 lead.

It was around that time, however, that the USC defense began to show signs of wearing down, and Tate, who was held to just 59 total yards of offense in the first half, really got rolling, breaking off a 32-yard touchdown run on Arizona’s next offensive series.

Just over three minutes later Tate struck again, hitting Shun Brown for a 30-yard touchdown pass, and all of a sudden USC’s lead was only 28-20.

USC would answer at the beginning of the fourth quarter, as Ware made made it a 35-20 game with a 42-yard touchdown run.

Tate would engineer two-straight Arizona scoring drives, however, with the sophomore signal-caller first connecting with J.J. Taylor on a 16-yard touchdown pass to pull the Wildcats within eight, before Zach Green rumbled into the end zone from three yards out. After Tate hit Tony Ellison on the two-point conversion attempt, it was a tie game at 35-35.

But it was all USC from that point on. Jones II capped a seven-play, 72-yard drive with a one-yard touchdown run to put the Trojans back in front 42-35.

Then, after Ajene Harris intercepted a Tate pass, Jones II put the game away with another one-yard touchdown plunge.

Darnold finished 20-of-26 passing for 311 yards and two touchdowns with one interception. Vaughns was his leading receiver, hauling in four passes for 59 yards and one touchdown.

For Arizona, Tate completed 14 of 31 passes for 146 yards and two touchdowns with two interceptions, and he also rushed for 161 yards and one touchdown on 26 carries.

USC amassed 642 yards of total offense compared to 380 for the Wildcats.

The Trojans were flagged an eye-popping 14 times for 123 yards in the victory, compared to just three penalties for the Wildcats for a total of 32 yards.

USC will next play at Colorado next Saturday.