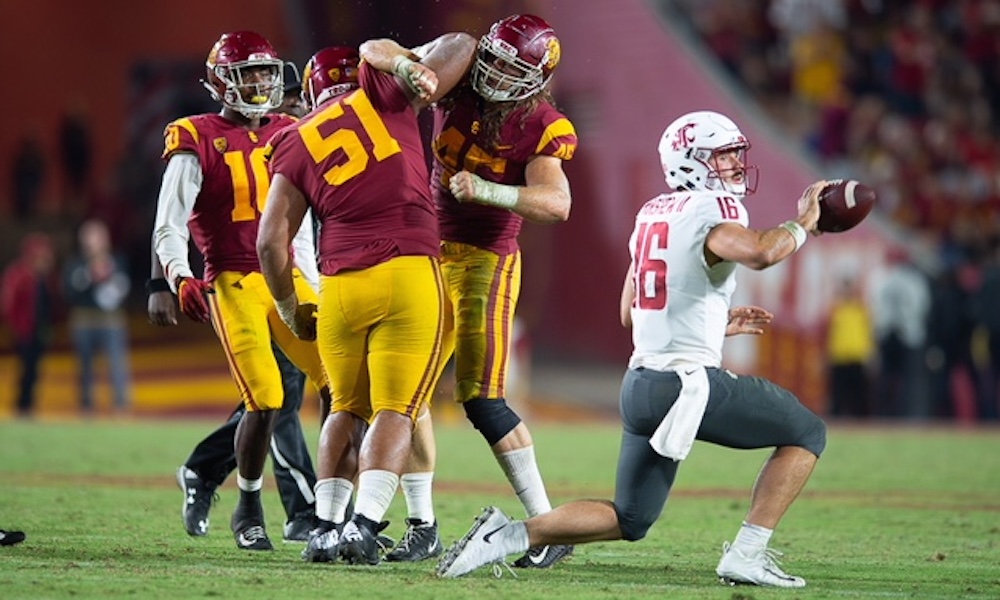 After several positive Covid tests and subsequent contact tracing forced USC to cancel its game against Colorado this past weekend, the Trojans have gone through five rounds of testing over the past three days, returned no positive tests and are on track to resume their season with Sunday’s game against Washington State.

With USC forced to suspend activity late last week, Helton said it was good to be back on the practice field this week.

“The last couple days have been great to get back on the grass,” Helton said. “Actually kids look fresh, almost felt like a bye week with them coming back. [We] have some fresh legs, moved around extremely well.”

Both USC and Washington State have now had Covid issues this season and the Cougars have had to cancel their past two games. But this game looks likely to take place at this point, just a week after appearing fairly unlikely.

“We look like we’re in a good spot,” Helton said. “Our kids are looking forward to the opportunity.”

The CDC recently announced that guidelines for the quarantine period can be shortened from 14 days down to 10, and as few as seven if accompanied by a negative test. But that change won’t help the Trojans this week, as there are still a few different levels those guidelines have to proceed through in order to affect USC. Helton said that while that is a national-level decision, it still has to pass through the state and local levels.

“It will get to us at some point in time. Hopefully sooner than later, but there’s a filtering process it has to go through,” Helton said. “Believe me, I was as happy as anybody when I saw that, but they said coach, just realize there’s a process to it and it does have to go through that process.”

Even without the shortened quarantine period, the Trojans are on track to get enough players back in order to play the game.

While those players in isolation with positive tests aren’t able to do any activities right now, the players in quarantine are able to work out on their own and prepare for Sunday’s game, similar to how the program could provide food and equipment for all players back in the spring during the initial shutdown. So any players coming back later in the week shouldn’t be starting completely from scratch, but Helton does believe Saturday will be a more comprehensive day that the typical day before gameday.

“Saturday is a big day for us,” Helton said. “It’s a day that we will review the entire game plan and probably put a little bit more emphasis on that day. We go through a full meeting day and usually it’s about an hour’s work, but it could be a little bit longer than that this time around.”

While USC will have at least some starters back on the offensive line, it still isn’t known exactly how many the Trojans will have, and just how deep into the bench that position will need to go. Justin Dedich and Liam Douglass have been talked about as the first guys up if depth is called upon, but after them, there are a lot of true and redshirt freshmen.

Helton reiterated on Thursday that he’s comfortable with any number of those young players being called upon as starters or reserves, as the Trojans have focused since fall camp on getting those players the same kind of reps — both in quantity and quality — as the veteran starters.

“Those kids have mixed in with the ones and had the opportunity to go with Kedon,” Helton said. “It doesn’t matter who’s called upon. They’ll do their job. I’ve got a lot of faith. We’ve invested the time and the training into those opportunities.”