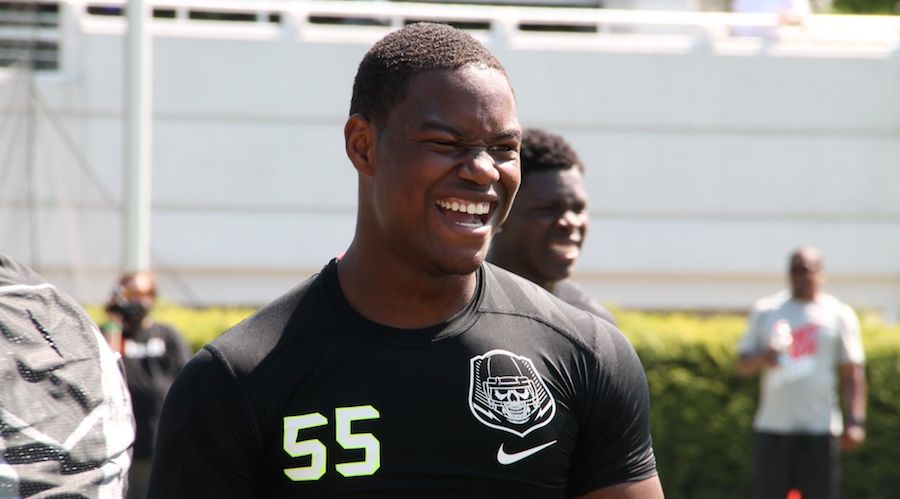 This is a non-binding move for the players, who are free to enroll elsewhere if they choose, while the school is bound to honor the paperwork.

While all three players are welcome additions, the fact that Hayes signed is somewhat of a sigh of relief after his recent visit to Notre Dame and talk that he would seriously be considering the Irish. Hayes has been a commit to the Trojans for a year-and-a-half, and was one of the more vocal commits at summer camps in terms of talking about the strength of his pledge. It was a recent visit to the USC campus and a meeting with the coaches, however, that led to Daelin firming things up and signing his paperwork.

“I was on campus two weeks ago,” Daelin said. “My mom took a vacation to Las Vegas and she didn’t want me to be home. So she brought me, and then we looked up how far away USC was from where we were at, and it was only like three-and-a-half hours, so we drove. So I got on campus and kind of stole a visit. It was fun.

“It was really just my trust in the coaching staff that settled things. They’ve believed in me since I was a 15-year-old commit, back then about a year-and-a-half ago. So them sticking with me through everything, you know, that I’ve been through throughout my recruiting process, and as far as my personal journey, and just continuing to build that relationship with them was really the biggest determining factor. And then just L.A. I’m excited to get down to L.A., get back to Cali. I love California. I love it. It’s beautiful.”

Hayes talked about the possibility of taking other visits, or of continuing to listen to the Notre Dame coaches.

“Obviously it depends on the Notre Dame coaching staff as far as if they even do continue to recruit me, but as far as my end goes, I’m pretty sealed. As far as other visits, that’s still undetermined, but I’m leaning toward it being doubtful. I’ll talk to my parents about that, but as of right now we’re all excited that I’m officially a Trojan.”

There has been no such wavering for Pollard, a USC legacy with both parents being Trojan grads, and a father who played defensive back for the school. C.J. shared his feelings on finally being an “official” part of the Trojan family.

“It’s an amazing feeling to be a part of greatness and tradition! I thank God for all of the blessings he has sent me.”