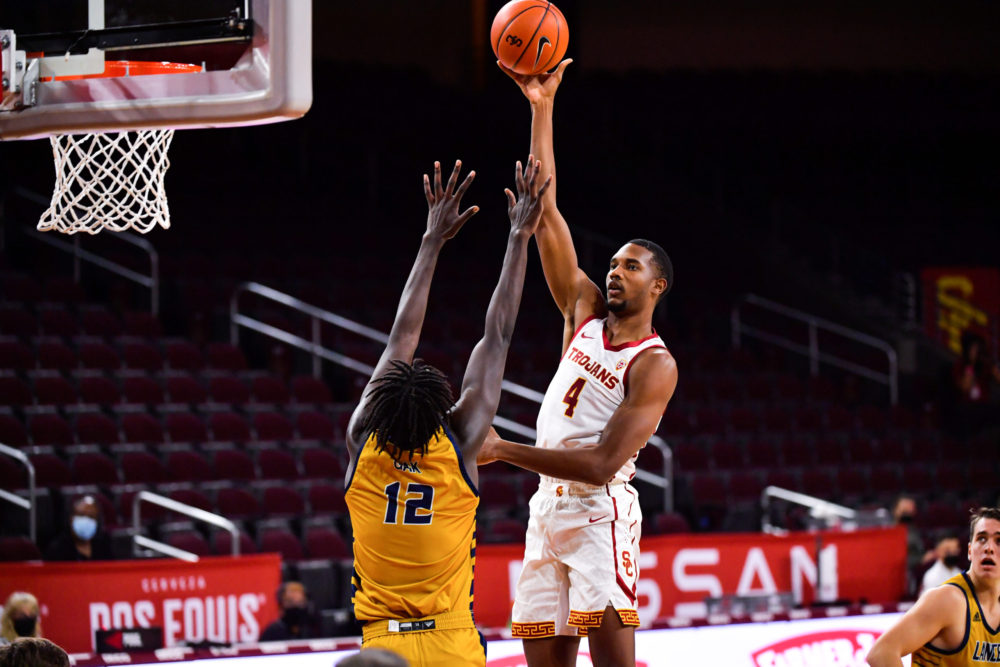 The first month of the college basketball season across the country has shown how precarious this season will be. On Saturday during the Gonzaga – Virginia game, the commentators pointed out that Virginia won the national title in 2019 and are therefore the defending national champions. Though the NCAA has repeatedly stated that there will be a March Madness, so many games have been cancelled that it is impossible to even guess what the tournament might look like.

USC last played three weeks ago in a win over UCI on December 8. Since then, two non conference games have been cancelled and the opening conference games against Stanford and at Oregon State have officially been “postponed.” As a result of at least one positive Covid test, the Trojans halted all basketball activities on December 13 and are only now resuming basketball team activities.

The next game on the schedule was against Colorado at home on December 31. USC smartly scheduled a non-conference game against LMU for December 29 to help the team get ready for their delayed start of conference play. On Saturday the LMU game was cancelled as result of one or more positive tests in the Lions’ program. The Trojans quickly found another opponent; absent any new Covid issues the Trojans will host Santa Clara on the 29th.

There has not been any official statement but presumably Ethan Anderson is now healthy and will be a full participant in all team activities. Two players who will likely be negatively impacted by the missed practices are Reese Waters and Drake London. Both need practice time on the court if they are able to make an impact this season and any production the Trojan coaches may have hoped for will likely be at best delayed.

Before the hiatus the Trojans were making almost 50% of their shots and 35.6% from three. Success from the foul line continued to be a problem; USC made only 60% of their foul shots in the first five games. The Trojans’ assist to turnover ratio is only 14.8/12.6; the return of Ethan Anderson should help. The big front line has been good on defense, blocking over 5 1/2 shots per game and altering many more. As of this weekend the Trojans NET ranking is 45 with a very good offensive efficiency (points per 100 possessions) 34th nationally. The defensive efficiency is only 68th, primarily as a result of the Cal Baptist three point barrage in the season opener. USC is 37th defensively over the last three games.

The Trojans are fortunate that they are not playing any of the top teams in the conference this week after the long layoff. Utah was picked to finish seventh and Colorado eighth in the preseason conference voting.

The Trojans host Santa Clara at 4:00 on Tuesday. The Broncos have started the season at 6-1. They have had four games cancelled or postponed and are scheduled to play LMU on January 2 which could also be postponed. They became available to play the Trojans when their December 28 game against Alcorn State was cancelled. Santa Clara plays in the West Coast Conference and like most teams in the league struggle behind Gonzaga, St Mary’s and BYU. Before the season the Broncos were picked to finish sixth in the conference. Their lone loss was to Colorado State on a neutral court, 70-57. The schedule so far has been pretty weak; the biggest names they have beaten are UC Davis and Cal Poly.

There is some history between these two programs. The Broncos beat the Trojans in December 2018 in double overtime. Tajh Eaddy had his best season for Santa Clara that year and should be looking forward to playing his former team. Herb Sendek is in his fourth season as head coach. He previously was the head man at ASU for nine season. At ASU he had a feud, or at least a one sided feud, with Tim Floyd. Floyd had offered Artesia High point guard Derek Glasser to walk on for the Trojans, which Glasser accepted. Sendek later offered Glasser a scholarship which sent Glasser to ASU. Floyd was vocal in his complaints that a school should not continue to recruit a player committed to another school, which seemed a bit dubious. The back story was that Glasser was a close friend with his high school teammate James Harden who was one year behind Glasser. Predictably Harden followed his friend to ASU and became a star. Glasser had a good career at ASU but it was likely that if Floyd had offered a scholarship both players would have been Trojans.

As a team Santa Clara is making only 41.7% from the field, 24% from three and 65% from the free throw line. These numbers don’t usually accompany a 6-1 record, which may speak to the quality of the teams they’ve played. The Broncos have pretty good size. Their best player is 6’9” senior forward Josip Vrankic. Vrankic leads the team averaging 16.6 points and 8.7 rebounds and also leads Santa Clara in steals. He has scored over 20 points in two games and has a season high 15 rebounds in one game. He has made 41% of his shots and 25% from three.

No one else scores in double figures for Santa Clara. 6’7” junior forward Keshawn Justice averages 9.6 points and 6.9 boards, though he is only making 33% of his shots and 23% from three. 6’5” junior guard Christian Carlyle leads the team with 2.6 assists per game and is averaging over 8 points and 3.6 rebounds. Sophomore center Jaden Bediako is 6’10” and averages over 8 points and 8 rebounds. He has made 50% of his shots but only 50% from the line.

The Buffaloes are 6-1 this season; their only loss is to top 20 Tennessee 56-47 on the road. They beat Washington in their only conference game 92-69 and will play Arizona on Monday before the game at Galen. Head coach Tad Boyle has compiled a 210-134(.610) record in his first ten seasons at Colorado. They last made the NCAA Tournament in 2016.

Boyle and Enfield have some history.  After the FBI investigation into several college teams and coaches Boyle publicly said that his program hasn’t cheated like Arizona and USC. That season the Buffs beat the Trojans in a close game at Galen. At the final buzzer the Colorado AD ran onto the court from his seat a few rows up behind the CU bench and grabbed Boyle in a bear hug. It’s very unusual for an AD to be jumping around gleefully on the court after a regular season win and Enfield wasn’t amused by Boyle’s statement or the AD’s antics.

The Buffs are led by star senior point guard McKinley Wright. He leads the team averaging over 16 points and almost 6 assists per game. Wright has 41 assists and only 13 turnovers so far this season. Only 6’1”, Wright has made an outstanding 60.8%  of his shots and 42% from three.

Junior big man Evan Battey is 6’8” and 260 pounds and he uses his big bulk against taller players. Battey is averaging almost 9 points and 5 boards though he is making only 43% of his shots.The other big man is 7’0” and 235 pound  senior Dallas Walton. He is making a very high 71% of his shots and has made 3 of his 7 shots from beyond the arc. Walton has also made 24-27 of his free throws.

Colorado has another front court player who is off to a good start. 6’7” senior forward Jeriah Horne is averaging 11.4 points and 6 rebounds. He has made almost 47% of his shots including 12-24 from three. He is also a perfect 12-12 from the line.

The Trojans will finish the week hosting the Utes on Saturday afternoon at 1:00. Utah is 4-1 so far this season and will play at UCLA on the 31st before meeting the Trojans. The one loss was a 83-64 spanking by rival BYU; USC hammered the Cougars by 26 on December 1.

The Utes NET ranking is 85. Their offensive efficiency is 107th and defensive efficiency is 55th. Head coach Larry Krystkowiak is in his tenth season at Utah and his teams have won 172 games going into this season. His son Luc is a freshman guard who has not yet had much playing time. The Utes have made 43% of their shots in their first five games, almost 35% from three and over 72% from the line.

The Utes’ star is 6’6” forward Timmy Allen. Some analysts were surprised he returned to Salt Lake City this season. Although he is a proven scorer, he has started a bit slowly. He is averaging 15.4 points but is only making 41.5% of his shots. He is solid from three at 37.5%. He also averages 3 assists and over 5 rebounds.

The Utes have a good backcourt in a pair of 6’1” guards. Senior Alfonso Plummer is off to a good start. He is averaging 14.8 points and making 45% of his shots and a tremendous 42% from three. Sophomore point guard Rylan Jones was a surprise last year. This year he is averaging 8 points and 4.6 assists and is a good shooter at 47% from the field, 44% from three and 80% from the line. If Ethan Anderson is fully healthy the two sophomore point guards should provide a good matchup.

This could be a difficult week for the Trojans. They will have only two days of practice before the Santa Clara game. It would not be surprising to see USC play out of sync on Tuesday, but they should be playing better by the end of the week. There has not been any information from the Trojans but it is likely that those players who were not in quarantine were only allowed to work individually with a single coach as they did before the county allowed team practices in the early fall. There also was no announcement about which player(s) or staff member(s) had positive tests.

It is important for the Trojans to win these three games. They need to beat mid level conference teams at home and Santa Clara’s record seems to have more to do with who they played than the Broncos’ play. The Trojans will have a size advantage in all three games and if the guards match their play in the first five games USC should sweep. The toughest game appears to be Colorado. The Buffs have been able to play more games and they are off to a good start. If either Ethan Anderson in man defense or the Trojans’ zone can keep Wright under control USC should beat the Buffs and win all three this week.