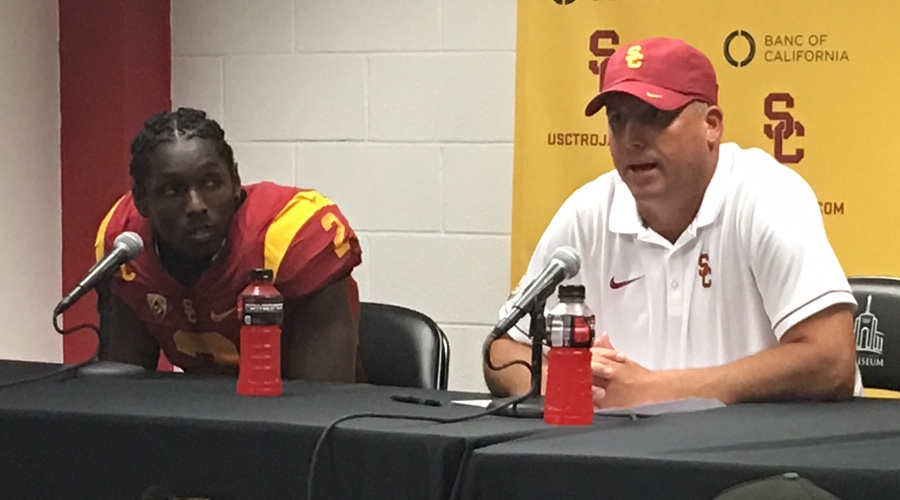 One week after suffering a crushing loss to Alabama, the Trojans responded with a solid performance on Saturday, taking down Utah State 45-7 in their home opener.

It was the defense that set the tone from the get-go, with linebacker Cameron Smith and Co. holding the Aggies to a total of just 49 rushing yards in the game – just one week after Utah State amassed over 400 yards on the ground against Weber State.

The Trojans special teams also came up big, setting up USC’s first points as Michael Pittman blocked a Utah State punt attempt on the Aggies’ first drive, with Quinton Powell recovering the ball and returning it to the Aggies’ six-yard-line. Three plays later Max Browne made Utah State pay, hitting JuJu Smith-Schuster for a three-yard touchdown to give USC a 7-0 lead.

The Trojans scored again early in the second quarter when Sam Darnold capped a 12-play, 87-yard drive off with a 13-yard touchdown pass to Deontay Burnett.

Leon McQuay III set up USC’s next touchdown, intercepting a pass thrown by Aggies quarterback Kent Myers and returning it to the Utah State 48-yard-line. On the ensuing drive, Browne hit Steven Mitchell for a two-yard touchdown, and the Trojans led 21-0 at halftime.

Leading 24-0 late in the third quarter, Trojans special teams came through, once again, with Adoree’ Jackson making a dazzling 77-yard punt return for a touchdown.

Utah State would respond with a six-yard touchdown pass from Kent Myers to Wyatt Houston, but the Trojans cruised the rest of the way, with Sam Darnold connecting with Smith-Schuster for a 15-yard touchdown pass early in the fourth quarter, and Aca’Cedric Ware closing the day’s scoring out with a two-yard touchdown run.

One week after struggling to find any success on the ground, the Trojans rushed for a total of 178 yards. Justin Davis led the way with 70 yards on 16 carries.

Darreus Rogers and Smith-Schuster both tied for the team-lead in catches with seven.

The game got off to a rocky start for the Trojans on their initial drive when starting left tackle Chuma Edoga was ejected after drawing an unsportsmanlike conduct call. Chad Wheeler lined up in his place throughout the rest of the contest.